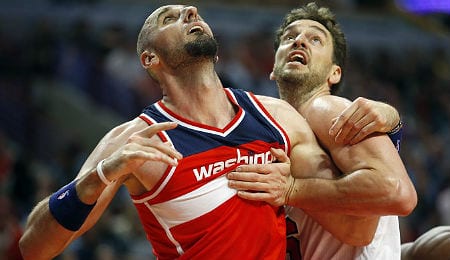 Pau Gasol (right) is unlikely to be as valuable in the Windy City. (AP Photo/Jeff Haynes)

The 2014-15 RotoRob NBA Kit returns today with another of our much-loved Top 10 lists. So while you wonder if LeBron James is playing head games when he says the Bulls are much better than his Cavs, let’s take a look at 10 players you do not want to reach for this season.

But not to worry, we’re here to help you avoid such calamity. Without further ado, we present our Top 10 Busts.

1. Pau Gasol, PF, Chicago Bulls: This guy was a star, the key word being “was.” Gasol is getting older and his stats will continue to go down. His points will drop a lot, maybe even back to the 13.7 he averaged in 2012-13. Now that Gasol is getting his minutes managed by Coach Tom Thibodeau, we really think he is in for a big downgrade, although he’s shown nice chemistry with Kirk Hinrich this preseason (see video below).

2. Anderson Varejao, C, Cleveland Cavaliers: LeBron James is coming back? This is going to help Varejao’s numbers, correct? Rumours suggest Sideshow Bob will lose the starting job to Tristan Thompson. Also, Kevin Love will steal a lot of rebounds. Don’t expect much out of Varejao this season from a statistical standpoint.

3. Phoenix Suns PG: We’ve got the Good (Goran Dragic), The Bad (Isaiah Thomas) and The Ugly (Eric Bledsoe). Dragic is a good bet and Bledsoe could very well have a breakout season with a lot of ups and downs. However, one of Dragic, Thomas and rookie Tyler Ennis is going to get left out. Plus, there is no guarantee that Bledsoe wins the starting job over Thomas. The bottom line here is that this is a situation that needs to be avoided.

4. Nicolas Batum, SF, Portland Trail Blazers: While Batum is a good all around player, he tends to be overrated. With LaMarcus Aldridge and Damian Lillard taking massive steps forward, it hurts Batum’s value. In the early rounds you try to win categories, like grabbing Chris Paul to win assists or Kevin Durant for points. Batum will help you out everywhere, but won’t deliver value relative to his draft slot considering how early he tends to go.

5. Kyrie Irving, PG, Cleveland Cavaliers: Let’s start this off with a blind player comparison, shall we? Last season, Player A averaged 17 points, 8.8 assists, 3.5 rebounds and 1.6 steals; Player B averaged 21 points, 6.1 assists, 3.6 rebounds and 1.5 steals. Back to that in a moment. Irving is a great player, but with LeBron James and Kevin Love coming to town and taking the ball with them, Irving will be better this season on the court. But this is Fantasy basketball where we just care about stats and Irving’s numbers will go down. Oh by the way, Player A? Ty Lawson. Player B is Irving. Food for thought.

6. Giannis Antetokounmpo, SG, Milwaukee Bucks: Where did all this hype come from? Yes, “The Greek Freak” has a lot of potential, but we don’t see a breakout season happening. The Bucks will want to get the ball to Jabari Parker as much as possible, limiting Antetokounmpo’s touches. Also, we were able to watch Antetokounmpo live at the Summer League and he didn’t look particularly good. He also looked average in the FIBA World Cup.

7. Wesley Matthews, SG, Portland Trail Blazers: Matthews is in Portland to spread the floor and give Aldridge and Lillard some room. Matthews is not a huge playmaker or a great rebounder, and with the Blazers’ bench getting a good boost, we don’t expect him to play 34 minutes a game again.

8. John Henson, C, Milwaukee Bucks: All signs point to Parker playing as a stretch four; if that’s the case, and Larry Sanders starts at the five, then Ersan Ilyasova and Henson will be the backups. With Henson being the fourth-best big on the worst team from last season, he is not worth a 10th round pick in a 12-team league.

9. Ryan Anderson, PF, New Orleans Pelicans: We see Anderson as the odd man out in New Orleans. We love his talent and in his Orlando days he was amazing, however, Anthony Davis is a star and we think Omer Asik will have the upside over Anderson. If Asik or Anderson get traded (something we don’t see happening), then throw this prediction out the window.

10. Danny Green, SG, San Antonio Spurs: The Spurs guard is solid. Green will help you in three-pointers, but at the end of the day he will not finish games and won’t do much else. Plus, if the Spurs blow the other team out, he will get some rest.

Mo Williams, PG, Minnesota Timberwolves: William is old, so has limited keeper value. He is on his fourth team in as many seasons and with Ricky Rubio, Andrew Wiggins and Kevin Martin also in this backcourt, minutes could be hard to find, let alone enough PT for Mo to offer Fantasy value.

Now it’s your turn. Let us know in the comments below which players you’re avoiding this Fantasy basketball season.

By McCade Pearson
Tags: LeBron James
This entry was posted on Tuesday, October 28th, 2014 at 6:34 pm and is filed under 2014-15 RotoRob NBA Draft Kit, BASKETBALL, Busts, McCade Pearson. You can follow any responses to this entry through the RSS 2.0 feed. Both comments and pings are currently closed.