The Wire Troll: Build a Foundation Out of Charles Clay 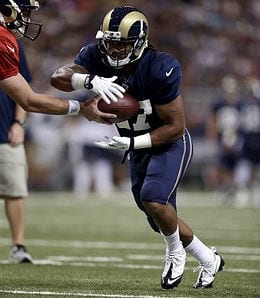 If you started Tre Mason Sunday, we bow down to you. (AP photo)

While you are still trying to figure out exactly how many people Percy Harvin punched in the face, we must remind you to put in your waiver claims. Also with a major bye pending in Week Nine you might want to proactively plan ahead to avoid future headaches. Once again, we sacrifice to the Fantasy gods our Wire Troll picks for Week Eight.

Derek Carr, Oakland Raiders: As Blake Bortles rose up draft boards thanks to a mature comeback bowl performance, Carr slid. It seemed the mighty USC had exposed Carr as a big game failure. Then to doom his professional career before it even started he was drafted and immediately named the starter by the dreadful Oakland Raiders. Carr didn’t explode on Sunday but he did play mistake free football vs. the solid secondary rotation of the Cardinals. The winless Raiders don’t look to be going on any win streaks, hence playing from behind is their forged forte. That means many more passing situations for Carr to learn and understand what it takes to win in the NFL.

Roy Helu, Washington Redskins: Now that we have concrete evidence that Kirk Cousins is not a winner, we must also remind you that Robert Griffin III isn’t exactly Jesus Christ. Basically, the season is a loss for the Washington Colt McCoys (oops, we mean Redskins). This makes us believe that RB1 Alfred Morris maybe more like an RB1.5 as he could stand to lose more snaps to the elder Helu. Morris is the future but as for now Helu can be a PPR jolt as a bye week replacement. In the aftermath of the Fred Jackson injury, Helu remains the same kind of sneaky play. Helu gets his touches (see video below) and that means opportunity is always a red zone away.

Tre Mason, St. Louis Rams: Don’t try to tell us you started Mason against Seattle on Sunday. Tweet us a picture if you did (@JoshJohnsonDSFM). Mason gained some thrust with some dynamic touches on Monday Night Football last week but we decided to wait and see what he could muster vs. a staunch Seahawk defense before we recommended him. He proved to be a launching burden to their staunchly system. While we hesitate to say the job is Mason’s for the long haul, its clear that Benny Cunningham will be the short yardage specialist. Zac Stacy was the starter at the beginning of the season but injuries have slowed him mightily. Both Stacy and Mason should be active this Sunday and even if Stacy gets the start we see them both getting touches. Mason is simply fresher right now and Stacy has not taken his game to the superior level like we all saw happening.

Kenny Stills, New Orleans Saints: This is a note to the Brandin Cooks fan club. We told you inconsistency plagues every Saints weapon, didn’t we? Now the Saints are 2-4 on the season and getting Cooks touches is not at the forefront of their attack. Drew Brees without a healthy Jimmy Graham seems like Joe Montana without Jerry Rice. So where does Stills, who had a breakout game Sunday with 5/103/1, come into to play? What Stills can provide is a firm dose of familiarity for Brees. The second-year WR knows Brees and you can bet Brees knows where he is on the field. New Orleans is in pure desperation mode and counting on their laurels just might be what gets the bayou jumping again.

Paul Richardson, Seattle Seahawks: The most underrated Fantasy killers have to be the Seattle WRs and if you don’t know this you were probably smart enough not to draft one. While Harvin owners in anything but a “Best Ball league” are shaking theirs heads, we believe Richardson can and will emerge as a factor. Richardson is a different player than Harvin so no “end arounds” are pending. What Richardson can do is find the seam route and take it to the house. After just one reception in the first six games, he hauled in four balls for 33 yards in the first game of the post Harvin-era. Though Richardson’s role is still uncertain, you should file his name in the folds of Fantasy scouting reports because he has a long career ahead of him. The fact that Doug Baldwin went off on Sunday has us even more intrigued about Richardson’s future.

Charles Clay, Miami Dolphins: We were a little befuddled by the lack of love Clay was getting this preseason. A slow start and some nagging and annoying injuries seemed to justify the snubbing. On Sunday, Clay delivered in key spots and he found the end zone for the first time this season. He is a perfect bye week replacement going forward because Miami has already had its bye and his experience level helps too. Clay’s current clean bill of health is a nice treat as well. Miami needs Clay to make this offense work. When the Bears contained the blazing hot Mike Wallace to under 50 yards on Sunday, it was Clay the Fish turned to in order to keep the defense honest through the middle.

By Josh Johnson
Tags: New York Giants, Percy Harvin, San Francisco 49ers
This entry was posted on Tuesday, October 21st, 2014 at 10:22 pm and is filed under FOOTBALL, Josh Johnson, The Wire Troll. You can follow any responses to this entry through the RSS 2.0 feed. Both comments and pings are currently closed.