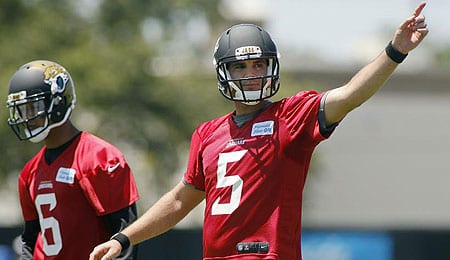 Blake Bortles (5) has impressed at rookie camp but is not expected to start from the outset. (Blackandteal.com)

Now that 2014 NFL draft is complete, you are probably wondering what rookies will emerge as legitimate Fantasy threats. We pigskin professors here RotoRob.com have placed the majority of our focus since the end of NFL season on the draft and its slew of talent. We have been studying for this series of articles like it’s a thesis of the 2014 offseason. So, without further pontification, we give you the 2014 Fantasy stock report for the quarterbacks drafted this month.

Blake Bortles, Jacksonville Jaguars: The Jags have already said that Bortles will not start the season atop the depth chart and e needs to handle this decision maturely. With a mentor like Chad Henne, who has had to fight for every snap he has gotten in the NFL, Bortles should be prepared when his chance arises. We view Bortles as a durable Dynasty addition and Bill Polian, for one, is also stoked about this pick (see video below). Jacksonville has been more active this off-eason than ever before, so when Bortles becomes the starter many other pieces will already be in place.

Johnny Manziel, Cleveland Browns: Of the 2014 QB class, Johnny “Cleveland” stands the best chance at starting this season. However, he must have the juice to beat out homegrown hero Brian Hoyer. Manziel is practically already the Mayor of Cleveland, so he has the fans’ vote. This is not a popularity contest, however, so “the Dawg Pound” must realize who is making the roster decisions and know that it is best for the future.

Teddy Bridgewater, Minnesota Vikings: Teddy is ready as we have said multiple times on our Podcast. However, we still believe Matt Cassel will open the season as the starter, and this could be a blessing in disguise. The longer Bridgewater watches, the more prepared he will be. You cannot stunt anyone’s development with game film. Granted, learning on the job helps too, but we believe it will be a cold winter day before Bridgewater first steps into a huddle. He probably won’t be the surge of Fantasy playoff lightning you will need, but come the 2015 season that will all be… um… water under the bridge.

Derek Carr, Oakland Raiders: Carr is another likely candidate to ride the pine for now. He has deceptive speed and Oakland believes he is the future. There should be no rush until the Raiders know their newfangled offensive line has fully gelled. Oakland has been very smart and extremely practical lately. It has one of the toughest schedules in NFL in 2014, so all signs point to another thrifty draft before the black flags start to swing on the playoff horizon. Carr should be groomed for next year, so buy his stock now when its value is still on par to his draft position.

Jimmy Garoppolo, New England Patriots: If you are able to add Tom Brady’s true successor in Dynasty formats it will be well worth the gamble. Jimmy G’s game needs some fine-tuning, but he can potentially play better than he looks.

Logan Thomas, Arizona Cardinals: We won’t see Thomas until 2016 or later, so Carson Palmer is Mr. Miyagi in this scenario and that makes Thomas Daniel-Son. Thomas has the size and durability, and when he is ready Arizona shall be excited. He can be bought for two or three pieces of silver this year or next.

Tom Savage, Houston Texans: So the Texans didn’t grab one of the highly touted QBs in the draft. Here’s where we’d like to remind you that this QB class isn’t the best ever. There is certainly potential, but only time will truly tell. Savage could start at some point in 2014 and this team has above average weapons. We are actually encouraged by the fact that Savage has played for three different college programs. He has tasted adversity and he came out stronger than ever. Given that Savage does not have the pressure of being an early round pick, Houston fans should roll with the punches and be elated when he succeeds.

Aaron Murray, Kansas City Chiefs: While Murray has his doubters, he may be forced into action before his time if Alex Smith, unhappy with his current deal, opts to hold out. Murray shouldn’t see the field until the 2015 season and his Fantasy value will basically be non-existent until he strings two or three quality games together.

A.J. McCarron, Cincinnati Bengals: Apparently the “Red Rifle” (Andy Dalton) is falling out of favour. We guess improving your stat line and making the playoffs every season isn’t good enough. Enter McCarron and the duel is set. While we don’t see him playing at all this season, we must remind you that injuries do happen. Save your nickels and come Round 25 of your Fantasy draft this summer, McCarron or Mark Sanchez could still be there for the taking.

Zach Mettenberger, Tennessee Titans: Jake Locker always seems to get hurt just when he is hot or when he is in our Wire Troll. So the Titans drafted a backup who just came off major knee surgery? Some scouts love Mettenberger, but we are not ready to make such a knee-jerk reaction.

David Fales, Chicago Bears: Jay Cutler has never been the healthiest player. Fales would have Brandon Marshall and Alshon Jeffery to cover his rookie tracks, should the opportunity present itself.

Tajh Boyd, New York Jets: The Jets have Geno Smith and Michael Vick? They also had 12 picks in the draft so why not take a chance on value? It is apparent that Smith’s job will never be safe. Boyd ran a pro-style offense in college and considering the Jets offensive woes, he should be considered a super deep sleeper in Dynasty formats.

Now it’s your turn. Let us know in the comments below which rookie quarterback do you expect to emerge with Fantasy value this year.

By Josh Johnson
This entry was posted on Wednesday, May 21st, 2014 at 2:15 am and is filed under 2014 RotoRob NFL Draft Kit, Draft report, FOOTBALL, Josh Johnson, Rookies. You can follow any responses to this entry through the RSS 2.0 feed. Both comments and pings are currently closed.