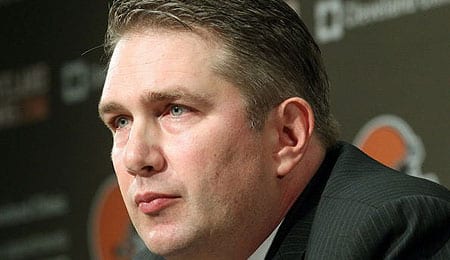 Rob Chudzinski didn’t exactly get a lot of rope to turn around the Browns. (Lonnie Timmons III/The Plain Dealer)

On this week’s episode of RotoRob Fantasy Football Weekly Podcast, heard every Wednesday at 2 p.m. EST on Blogtalkradio, Nick and Josh were joined by featured expert Mike Noto of nflnewsstream.com. Also, RotoRob.com’s own Vaney Hariri joined us to preach his gospel. Finally Josh enlisted his friend and famed Dallas Cowboys Fanatic Dustin White to join in the discussion.

Click the play button below to enjoy all the Fantasy football fun and frivolity! Next week, no guest has given us the go ahead, so it’s a mystery to even us.

By Josh Johnson
Tags: Mike Noto
This entry was posted on Wednesday, January 1st, 2014 at 8:54 pm and is filed under FOOTBALL, Josh Johnson, Nick Wagner, Podcast, RotoRob's Fantasy Baseball Weekly, Vaney Hariri. You can follow any responses to this entry through the RSS 2.0 feed. You can skip to the end and leave a response. Pinging is currently not allowed.