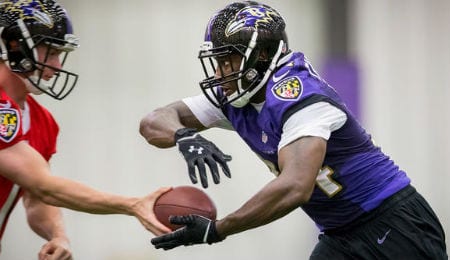 Yes, we could have easily made this a rookie-only column this week. Two young signal-callers (Blake Bortles and Teddy Bridgewater) took their first NFL snaps on Sunday, and both will hopefully have long productive careers. Fantasy owners in need of a bye-week replacement, however, may not want to put their trust in such inexperienced youngsters quite yet. We don’t love either players’ Week Four matchup, leaving us with no choice but to look elsewhere for a recommendation. Finding quality fill-ins can be the difference between victory and defeat in most leagues, meaning we need to see more than one half of football before giving either guy our seal of approval. Good luck and enjoy The Wire Troll for Week Four.

Eli Manning, New York Giants: Don’t get us wrong, we wouldn’t feel comfortable going with Manning as a starter all season. The inconsistent Manning is coming off a respectable game versus Houston (21-for-28, 234 yards, two touchdowns — see video below for one of them — and after watching the film we can confirm he actually threw zero interceptions) and this weekend faces a Washington secondary that not only got torched by Nick Foles to the tune of 325 yards and three scores, but also must replace their top cover corner DeAngelo Hall, who was lost for the season. Manning also finally got on the same page with top wideout Victor Cruz, giving a glimmer of hope for brighter days ahead. Look for the Giants’ passing attack to thrive in Week Four.

Lorenzo Taliaferro, Baltimore Ravens: Thanks to an injury that kept unimpressive starter Bernard Pierce sidelined in Week Three, Taliaferro got his first chance to carry the rock at the professional level. Despite his impressive debut (18-91-1) he is probably more of a guy to stash than a bye week replacement right now, since Pierce is expected back soon. We do believe, however, that the talented rookie should take the lead in this committee before too long. While Justin Forsett is also in the mix for touches in a complementary role, he is not viewed as an every-down back. If Pierce continues to struggle look for Taliaferro to be the main beneficiary.

Alfred Blue, Houston Texans: Who could have ever predicted that Arian Foster would get hurt? Again. Since Foster can’t be trusted to stay healthy anymore his owners absolutely need to have Blue as a handcuff. Other owners looking for help at the position should consider Blue as well now that he is the unquestioned No. 2 back in Houston. The Texans’ defense usually keeps them in games, meaning whoever is in the backfield will normally receive more than the 13 totes Blue had in his first start. Maybe Foster stays healthy the rest of the season, relegating Blue to spot duties, but we have a hard time seeing that happening. Plus, if you can pair Blue with Montee Ball then you win the right to have a great team name!

Jordan Matthews, Philadelphia Eagles: We have not been shy about our love of this year’s rookie crop of wideouts, and Matthews has been one of our favourites from the start. Now that the rookie has had his first breakout game we think the time has come to sell off any shares of Riley Cooper (whose days of Fantasy relevance appear to be fading) and buy Matthews while his price is still low. Matthews has the size to be a major red-zone contributor in one of the league’s top scoring attacks.

Allen Robinson, Jacksonville Jaguars: While fellow rookie (and previous Wire Troll recommendation) Allen Hurns did have a flashy 63-yard touchdown in which he shook off two would-be tacklers against Indianapolis, Robinson actually surpassed Hurns on the depth chart and is getting the targets (16 in the last two games) to prove it. Robinson appears to be the safest option among Jacksonville’s trio of rookie receivers. Like the aforementioned Matthews, Robinson also has the size to be a factor in the red zone. Unlike Matthews, Robinson will likely find himself on the wrong side of a number of lopsided contests, opening the door for those unpredictable garbage-time points.

Owen Daniels, Baltimore Ravens: Last week we joked around on the RotoRob.com Fantasy Football Podcast that Daniels’ two touchdowns against Pittsburgh may be his only scores all year. All that has changed now with the season ending hip injury suffered by teammate Dennis Pitta. Offensive Coordinator Gary Kubiak loves to feed his tight ends so as the new No. 1 option Daniels should get enough looks to be considered roster worthy in most leagues. Health is always a concern with Daniels so you may want to think about also holding onto a backup in deeper leagues. If his health holds up Daniels should post numbers similar to what was expected of Pitta.

Now it’s your turn. Let us know in the comments below who your favourite Fantasy football waiver wire pick up of the week is.

By Nick Wagner
This entry was posted on Tuesday, September 23rd, 2014 at 9:08 pm and is filed under FOOTBALL, Nick Wagner, The Wire Troll. You can follow any responses to this entry through the RSS 2.0 feed. You can skip to the end and leave a response. Pinging is currently not allowed.