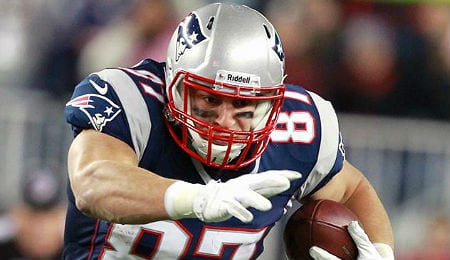 Rob Gronkowskli should get a big workload in Week Two. (Penelopehasler.blogspot.com)

Here we are again, yet another season and another opportunity to display your Fantasy football dominance. We here at RotoRob.com have been hard at work putting together the tools you’ll need to crush your competition and take your rightful place on the throne as your league’s 2014 champion. Let’s get right to it with your week two Sit ’em, Start ’em picks.

Robert Griffin III, QB, Washington Redskins vs. JAC: The Jacksonville Jaguars are, in our humble opinion, a team on the rise. They have a very aggressive defense that in most cases will serve them well, but not next week. Look for Redskins head coach Jay Gruden to loosen his grip on his young playmaker, RGIII, who has more weapons this year and is fueled by Subway (see video below).

Jake Locker, QB, Tennessee Titans vs. DAL: The Titans are another team headed upward, whereas the Dallas Cowboys seem to be headed in the other direction. There is no doubt that the ‘Boys — especially the defense — will need to make some wholesale changes, and as a wise man once said “the best time to hit a man is not when he’s down, it’s when he’s trying to get up.”

Rob Gronkowski, TE, New England Patriots @ MIN: We may finally be entering the era of decline for the great Tom Brady, but before he collects his gold watch we expect him to pad those Hall of Fame stats. Coming off an embarrassing loss to the Miami Dolphins, the Patriots will try to redeem themselves against the Minnesota Vikings who are generally solid on D, but only so so against tight ends. So expect a heavy dose of Gronkowski.

Philip Rivers, QB, San Diego Chargers vs. SEA: The Green Bay Packers did not attempt a single pass in the direction of All Pro corner Richard Sherman. Does anybody think that Rivers will be able to resist? Of course not… and the Legion of Boom will make him pay.

Dallas Cowboys Defense @ TEN: We know, we know… Captain Obvious, but somehow the media hype machine that is Jerry Jones still has a few of you out there convinced.

Zac Stacy, RB, St. Louis Rams @ TB: It’s a shame that Stacy has a quarterback that couldn’t make it through a pillow fight, because he was primed for a breakout year. However, right now, he’s only looking at eight in the box.

Larry Fitzgerald, WR, Arizona Cardinals @ NYG: The New York Giants definitely seem like a soft target and Fitzgerald surely seems due, but hold out one more week. Calvin Johnson’s domination aside, the Giants’ secondary is better than most think.

Now it’s your turn. Let us know in the comments below who you plan to start and who you think should sit on the pine in Week Two.

By Vaney Hariri
This entry was posted on Wednesday, September 10th, 2014 at 10:35 pm and is filed under FOOTBALL, Start 'em Sit 'em, Vaney Hariri. You can follow any responses to this entry through the RSS 2.0 feed. You can leave a response, or trackback from your own site.