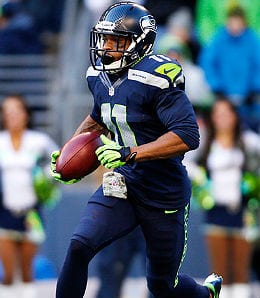 Taking Percy Harvin as your top WR is a recipe for disaster. (AP Photo/John Froschauer)

No big name or prospect is safe as the 2014 RotoRob NFL Draft Kit examines those players that could potentially fail or not live up to their ADP status.

We tend to think for the most part a Fantasy bust is player drafted in round five or higher. It’s real easy to pluck someone off the waiver wire and look like a hero but we tend to stick with a handful of guys too long because we believe in them or we drafted them too high. This list is cautionary for those of you that tend to reach too early.

1. Sammy Watkins, WR, Buffalo Bills: While we understand rookie WRs don’t typically dominate, the pressure is firmly on Watkins. The Bills traded two first-round picks and a fourth-round selection to move up to get this kid. Then, they traded away their top target Stevie Johnson to make sure everyone knows they are committed to Watkins. Given Watkins’ collegiate accomplishments we see him being respectfully matched up against a top cornerback each and every week. We don’t doubt his talent but we also don’t see him gaining 1,000 yards or catching 100 balls. If you have visions of Watkins duplicating Keenan Allen’s 2013 numbers, just remember E.J. Manuel is no Philip Rivers. The fact that Watkins is dealing with a rib injury this preseason isn’t helping matters.

2. Cordarrelle Patterson, WR, Minnesota Vikings: So many people are clamouring for him as if Patterson is basically the next Randy Moss. He simply is not. Moss destroyed DBs as a rookie… come on, you remember — nobody could get a finger on him, much less a body. Patterson is athletic but he is still learning. In his first eight games as a rookie, he recorded 13 receptions. Patterson had 32 receptions in the final eight games and he had just one 100-yard receiving performance which featured a now infamous 79-yard slant. Is that enough to warrant taking him in the first five rounds? So far, Patterson has tried to avoid contact whenever possible therefore we view him as timid until he proves otherwise. Hell, he even looked a little nervous signing autographs for his peeps (see video below).

3. Colin Kaepernick, QB, San Francisco 49ers: There is a big difference between having happy feet and being a running QB in the “read option.” While maturity is expected from Kaepernick, we don’t think his shiny new contract will help motivate him. He has the agility to make things happen, but the rest of the NFL also has several game tapes on him. We expect better preparation from opposing defenses this season as Kaepernick continues to harness his 90 mph arm into a more accurate rifle. Regardless of how you feel about his key weapons (Michael Crabtree, Vernon Davis and Anquan Boldin), it’s probably pretty safe to say that Kaepernick’s career completion percentage of 59.8 does not strike you as trustworthy. As we said on our July 23 Podcast, it’s ludicrous to make the running QB argument. We can’t in good faith in this day and age bump up a QB up on our cheat sheets because of his legs.

4. Percy Harvin, WR, Seattle Seahawks: Injuries limited Harvin to one regular season game last year, in which he made one reception. He has never had a 1,000-yard season and he has never started an entire 16 game season. “But, Harvin scored a TD in the Super Bowl,” you say? Actually he didn’t, he had one 30-yard rush, which was electrifying. However, more often than not Harvin is a decoy, a buoy if you will, that you must pay attention to before you pursue the actual ball carrier. We have seen people taking him as their top WR receiver in rounds two or three — don’t do that!

5. Doug Martin, RB, Tampa Bay Buccaneers: While some inferior sites have Martin on their sleeper list we are ready to call him a one-year wonder. He dropped 21 spots in our RB rankings for 2014 to number 25. And really the only reason we slated him that high this year is because of opportunity. Given that Martin has already suffered a major injury, we believe he could hurt something else. Plus, let’s not forget that his team could be throwing the ball 35-to45 times each week. The injury to rookie Charles Sims doesn’t make Martin any more valuable.

6. Montee Ball, RB, Denver Broncos: Are you really going take player in the first round with no track record? We realize who Ball’s QB is but that does not guarantee he won’t get trumped by Ronnie Hillman or C.J. Anderson. Ball also just had his appendix removed in early August so first team reps and mobility were limited during camp.

7. Eddie Lacy, RB, Green Bay Packers: Does anyone remember Ladell Betts or T.J. Duckett? Does the name Barry Word ring any bells? While it’s not fair to think Lacy will join those one hit wonders with no b-side on the flip-side in the jukebox of NFL history, we still would like to speculate. Let us also consider the institution (Alabama) that produced Lacy. Mark Ingram and Trent Richardson are also products of the same program with slightly longer teeth and they both are playing for their very existence this season. Will Lacy (who has already suffered one concussion as rookie) have the stamina for a grinding 16-game schedule? We love this kid, but we are not 100 per cent sure he can duplicate his 1,000-yard debut through adjustments week in and week out.

8. Andre Johnson, WR, Houston Texans: It has been a few years, but let us not forget how Johnson almost became the best that never was. Injuries cost him half of the ’07 and ’11 seasons. Each year that followed he bounced back with 100-plus reception seasons. Johnson could have three solid years of production left in him but with a murky QB situation in Houston, we wonder if he has finally peaked.

9. Ben Tate, RB, Cleveland Browns: “You can’t trust a backup that has never been available for a full 16-game season” said Nick Wagner on our August 6 Podcast. Tate has golden opportunity to be a major bread winner for a rebuilding team. Yet, he has always been a stopgap option throughout his career and until he can prove he is something more we see him as yet another Browns flop.

10. Shane Vereen, RB, New England Patriots: Exactly 12 months ago Vereen was hotter than Sriracha. He looked like Darren Sproles, Danny Woodhead and Reggie Bush all rolled up into one concise package. Then Vereen broke his wrist. Now the rumblings are starting again and we have repeatedly dropped our collective jaws when we see him getting drafted before round five. Sure, Vereen’s PPR value is ripe but he is not the only mango in the grove. Stevan Ridley is not dead yet and you can find out how we feel about James White in our Top 10 Sleepers, coming soon.

Now it’s your turn. Let us know in the comments below which NFL players you are avoiding on draft day.

By Josh Johnson
Tags: Sammy Watkins
This entry was posted on Tuesday, August 26th, 2014 at 12:41 pm and is filed under 2014 RotoRob NFL Draft Kit, Busts, FOOTBALL, Josh Johnson. You can follow any responses to this entry through the RSS 2.0 feed. Both comments and pings are currently closed.