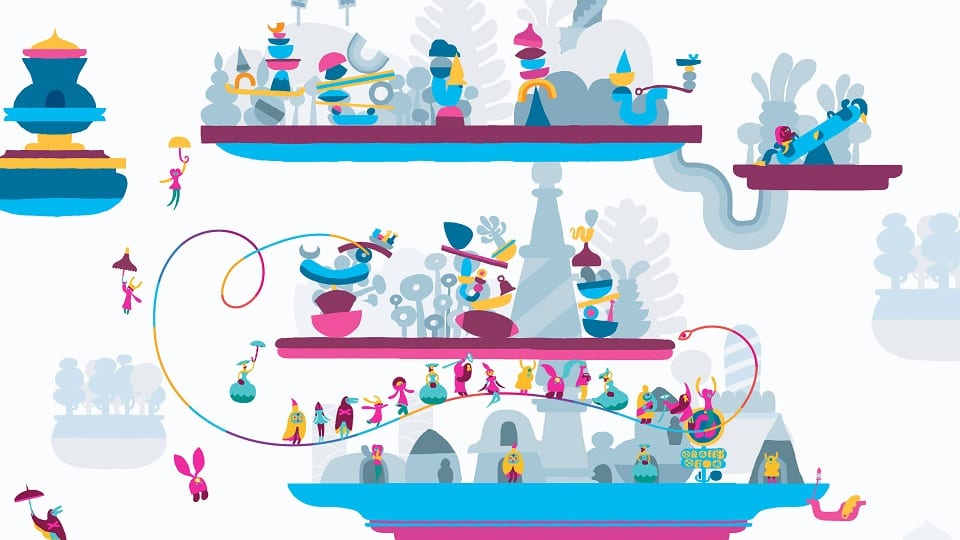 When Sony first launched the PSN Play promotion back in 2011, it came off as a watered down version of Microsoft’s Summer of Arcade — all four titles were even available on XBLA just one day after hitting PSN. Fast-forward three years, and it’s Sony that’s dominating the indie marketplace. Nowhere is that more evident than with PSN Play 2014, which features four exclusive, cross-buy games while Microsoft’s Summer of Arcade is MIA.

So far, gamers have been treated to a pair of excellent entrants in Rogue Legacy and The Swapper, and now it’s up to developer Honeyslug to continue the trend with Hohokum.

Guiding the colourful, snakelike creature known as the “long mover” is graceful and responsive. There are only a few buttons to keep track of to speed up, slow down and wiggle, which results in an even faster burst of speed. The right stick zooms the camera in and out, though often not as far as you’d like, and we’d recommend turning off auto-zoom as it helps to see more of the level at once.

Without question, the biggest selling point of Hohokum is its presentation. Visually, the game is a cavalcade of beautiful colours, abstract designs and inventive creatures all inhabiting a world whose 15 levels are completely different yet implausibly still feel like part of a singular collective. There’s a rhythmic calm that derives from watching the way the long mover slithers and circles, and it’s easy to gently glide around levels while simply taking it all in.

Equally vital to Hohokum’s success in delighting the senses is its soundtrack, which instantly enters into the same pantheon of auditory gems as titles like Journey and Sound Shapes. Its mellowness draws you even deeper into the artistic world, allowing for a level of relaxation rarely found in gaming.

It’s rare (maybe even unprecedented) that we finish a game and are still not sure how to put its premise into words. Nonetheless, that’s exactly where we find ourselves with Hohokum, which may or may not be considered a game in the truest sense of the world, depending on who you’re asking.

There is no plot. There are no instructions. This is no discernible force driving the action. You’re simply dropped into the world and start guiding the long mover around. Where do you go from there? That’s up to you. And therein lies the game’s most unique and liberating quality. Unfortunately, it can also be its most tiresome and off-putting.

When you’re unraveling the mystery behind a level it can be enjoyable, and even just wandering around can be enough when you’re still taking it all in. After you’ve stalled for five-plus minutes, though, and are flying around aimlessly — whether searching for the solution to a particular level or figuring out the game’s hub system to try to reach an area you haven’t already visited — it can get monotonous. Your mileage may vary (YMMV) is true to an extent in pretty much every game out there, but nowhere is it more apt than in Hohokum.

To give you an idea of just how abstract a level is, consider this: You arrive to find what looks like a giant wedding cake with a groom and the person officiating it, but where is the bride? She’s a few layers below, so you fly down and she jumps on your back. Upon returning to the groom the couple is married, which constitutes one piece of the puzzle.

Next you’ll see a group of waiters holding drinks. Again you fly past, allowing them to mount you and zoom past guests, each one taking a glass from the waiters. It turns out there are more guests than drinks, so you’ll need to refill them, right? To do that you submerge the waiters into the surrounding body of water. Do so until everyone has a drink and you’re on to the next stage. Solve them all and you’re treated to a short “back story” that shows how the worm you just found came to be there.

It’s a pretty loose interpretation of gaming, and things never crystallize even as you attempt to locate all 15 missing worms. Some levels are definitely cleverer than others, but they’re all abstract. Even with no instruction, Hohokum is a short experience — to the point that one of the trophies is for completing it in less than an hour — and unless you’re keen on just mellowing out to the sights and sounds. it’s one that offers very little incentive to return.

Hohokum is a difficult game to score. Certain gamers will find the beautiful presentation and atypical gaming refreshing. Others, however, will have no patience for the lack of guidance or challenge, as well as not adhering to core gaming principles. If you’re looking for something off the beaten path then you should give Hohokum a look. If not, stay away.

Now it’s your turn. Let us know in the comments below what you think of Hohokum.

By Herija Green
This entry was posted on Saturday, August 16th, 2014 at 7:26 pm and is filed under Herija Green, Video Game Reviews. You can follow any responses to this entry through the RSS 2.0 feed. You can leave a response, or trackback from your own site.