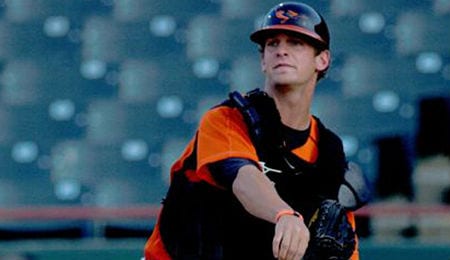 Caleb Joseph is swinging the hottest bat in B-More. (Luminationnetwork.com)

Today we offer up some tips for play on Friday August 8 on Draftster.com.

So who’s been carrying the Orioles with both Adam Jones and Nelson Cruz slumping? How about rookie catcher Caleb Joseph ($8,300)? All this 28-year-old freshman has done has gone yard in four straight games to help pick up the slack for All-Star Matt Wieters, who is out for the season. Joseph has gone 6-for-14 with seven RBI over this stretch and his homer streak ties a franchise record first set by Gus Triandos in 1959 and then matched by Ramon Hernandez in 2006.

Before you cough up $8,900 for Yankee 1B Mark Teixeira, you better make sure he’ll be playing. He missed Thursday’s game after getting stitches in his pinkie — just his latest health woe. Teixeira has actually had a pretty nice comeback season — at least in comparison to the nightmare that was 2013 — but he remains fragile, missing games here and there. And that makes him tough to bet on in daily fantasy baseball.

Mets 3B David Wright will set you back just $3,000 in Philadelphia Friday. What a bargain, right? Um, hold your horses. For starters, Wright has always struggled against Philly starter A.J. Burnett (3-for-27) and he hasn’t exactly been on top of his game in the second half. Even with a modest six-game hit streak, Wright is just 15-for-78 since the All-Star break. Yuck.

Detroit SS Eugenio Suarez (knee) is expected to return to action Friday after missing the past three games. However, even with his modest price of $3,000, we’re going to avoid him for now as he wasn’t exactly tearing it up before getting hurt.

Padre OF Seth Smith has been nothing if not inconsistent this season. He started poorly (.246 in April) got ridiculously hot in May (.354) before seeing his stock fall in June. But Smith was rocking again in July and, after smoking a game-winning dinger Wednesday, is showing signs that August could also be a big month. He’s hit in four straight games, racking up a pair of extra-base knocks on Wednesday, leaving him one shy of 40 for the season. At a fairly low price of $5,500, Smith is definitely worth investing in on Friday against the Pirates, despite starter Vance Worley’s superb work of late.

By RotoRob
This entry was posted on Friday, August 8th, 2014 at 11:23 am and is filed under BASEBALL, Daily Fantasy Sports, RotoRob. You can follow any responses to this entry through the RSS 2.0 feed. You can leave a response, or trackback from your own site.