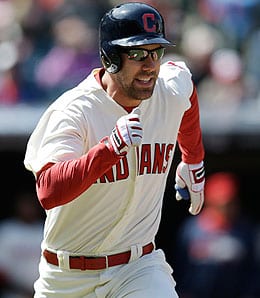 Each Monday in Diamond Stocks, we will look at five players with ascending Fantasy value and five players whose stock is plummeting.

Josh Tomlin, SP, Cleveland Indians: Tomlin should be in Cleveland to stay now. After beginning the season at Triple-A Columbus, the crafty right-hander, who was in our Wire Troll back in early May, is 4-2 with a 3.12 ERA and 0.94 WHIP. On Saturday, Tomlin held the Rangers to three earned runs over eight innings, walking none and fanning five. Fantasy owners will love this: he has not walked more than one batter in any of his six starts, four of which are quality starts, and has 35 strikeouts for the season (seven games total). And yet, he is owned by only 10.8 per cent of ESPN leagues (up a whopping 1.7 percentage points in the past week) and 27 per cent of CBS leagues. Come on, people! This dude even has Mr. T on his side (see video below).

David Murphy, RF, Cleveland Indians: Like his teammate Tomlin, Murphy was recommended recently in The Wire Troll, but he deserves more kudos. Would someone please remind ESPN owners, who have dropped Murphy last week 6.5 percentage points (to 36 per cent), that they’re dumping David Murphy, not Donnie Murphy? Though CBS owners are a little wiser (50 per cent), Murphy’s red-hot May has carried over into June, as he is 11-for-24 (.458) this month with four RBI and has hit safely in 10 of his last 11 games.

Gregor Blanco, LF, San Francisco Giants: Think of Blanco like the Dos Equis man. “I don’t always start, but when I do, I prefer to get multiple hits.” He is unowned in ESPN leagues and owned by 1 per cent of CBS leagues, but the man whose name translates to Greg White in English has actually been remarkable in his full outings. Blanco has five multi-hit games in his last six starts, and is 14 for his last 31 overall (.452), with a respectable OPS of 688 for the season and six stolen bases. Fantasy owners in need of a quick fix in the outfield should stay thirsty for his services.

Jake Arrieta, SP, Chicago Cubs: Arrieta tends to be erratic, but has avoided death by walks this year. Sunday’s outstanding effort against Miami (six IP, three hits, no earned runs, no walks, seven Ks) continued his recent positive trend, as he often holds opponents to one run or less despite not getting deep into games (four times in his last five outings). Owned in just 1.6 per cent of ESPN leagues and 14 per cent of CBS leagues, Arrieta is 1-1 with a 2.50 ERA in seven starts, with 35 Ks in 36 innings.

Cole Gillespie, LF, Seattle Mariners: Gillespie might as well be Rodney Dangerfield, because he has gotten no respect and zero (literally) ownership in the Fantasy world. But don’t sleep on the journeyman, now on his fourth team in five years. If Gillespie continues to see the field, he could improve on what’s been a nice five-game stretch: 9-for-18 (.500), four multi-hit efforts, one homer and two RBI.

Seth Smith, LF, San Diego Padres: This one pains us to write, because Smith was our inaugural poster boy for the “Five Up” segment on May 12. But since the surge, the weight of the Padres’ offense on his shoulders has simply been too heavy for poor Smith. He’s 7-for-39 (.179) in his last 12 games with just one RBI and three extra-base hits, and Fantasy owners have taken notice. ESPN users have dropped Smith 35 percentage points to 30.2, while he is down to 38 per cent in CBS leagues. Congratulations Mr. Smith, you are the first player to make both lists! We’re confident you’ll find your way back onto the right side of the tracks soon.

Torii Hunter, RF, Detroit Tigers: Hunter has not been much of a good story in his last nine games, going 7-for-34 (.206) with a homer and three RBI, with five of those hits coming in a two-game span over the weekend against Boston. Speed is no longer part of his game, as he has swiped just one bag in 2014. Hunter is universally owned in ESPN leagues and at an 82 per cent clip in the CBS world, but you have to wonder if this is just a minor slump or if his age (39 next month) is beginning to catch up with him.

Ubaldo Jimenez, SP, Baltimore Orioles: Ladies and gentlemen, reintroducing the early-season Ubaldo Jimenez. This message is primarily directed at CBS owners, who hold Jimenez at a 53 per cent clip (he is owned in only 15.6 per cent of ESPN leagues). Jimenez went on a nice little run in early May, then hit a snag for a couple of starts before seemingly turning the corner again last Tuesday against Texas. But Sunday he was shelled by Oakland for six earned runs and five walks in 2 2/3 IP, and UJ has 17 walks in his last four outings. Suddenly, we’ve taken notice of his 2-7, 5.01 ERA and 1.53 WHIP again (and not in a good way).

Carlos Beltran, RF, New York Yankees: Beltran is restricted to a DH role as his elbow continues to heal. His bat isn’t back to form yet, as the 36-year-old is just 1-for-14 (.071) in four games since his return. To be fair, he wasn’t exactly tearing it before his DL stint either, as it’s been 20 games since his last home run, a span in which he’s driven in just three runs. Still, Fantasy owners have maintained their faith in Beltran, as evidenced by his 73.5 per cent ownership (up 17.4 percentage points in the last week) in ESPN leagues and 82 per cent in CBS leagues.

Jean Segura, SS, Milwaukee Brewers: The only memorable thing Segura has done in the past week has come on defense with a game-saving ninth-inning stop. That’s because his offense has hit the skids, in a 6-for-37 (.162) stretch over his last nine games. Segura still has the speed (12 steals), but only two jacks and, more alarmingly, a lackluster .286 OBP.

Now it’s your turn. Let us know in the comments below who you think is soaring and who’s plummeting.

By Michael Seff
This entry was posted on Monday, June 9th, 2014 at 11:17 pm and is filed under BASEBALL, Diamond Stocks, Michael Seff. You can follow any responses to this entry through the RSS 2.0 feed. Both comments and pings are currently closed.