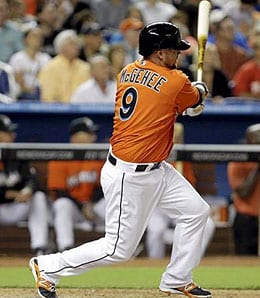 You really didn’t think we’d get through a full week with no changes in the closer ranks, did you? Sure enough, Cleveland removed John Axford from the role Saturday. This season continues to be a constant battle to acquire and amass points in the save category. Without further ado, let’s find some potential free agents to alleviate your bullpen and injury woes.

Cody Allen, RP, Cleveland Indians (CBS: 31 per cent owned, ESPN: 31 per cent): Axford has struggled, taking losses in two of his last four appearances and the Tribe have decided it’s time to give him a “time-out.” Terry Francona is indicating that Cleveland will go with a bullpen-by-committee approach, but Allen, 29th in our Relief Pitcher Rankings last month, has to be the favourite for save chances. For those that handcuffed Axford and Allen on draft day, the wait is now worth it. For those that didn’t, it’s time to part with some of FAAB.

Casey McGehee, 3B, Miami Marlins (CBS: 48 per cent owned, ESPN: 34 per cent): We recommended McGehee in the season debut of the The Troll, but apparently not enough of you were listening. He finally hit his first homer of the year Saturday against the Padres… expect more to follow. McGehee is batting cleanup for the Fish and has responded in fine form, hitting over .300 and turning into an RBI machine (as you can see in the video below). Who would have thought the one-two punch of Giancarlo Stanton and McGehee would have Miami only one game back of the front-running Braves in mid-May?

Chris Heisey, OF, Cincinnati Reds (CBS: 6 per cent owned, ESPN: unowned): Jay Bruce had surgery last week to repair a partially torn meniscus and will be sidelined for a month. Heisey, who smoked 18 dingers as recently as 2011, should be the beneficiary of most of the extra at-bats until Bruce is back.

Rougned Odor, Texas Rangers (CBS: 17 per cent owned, ESPN: 1 per cent): Donnie Murphy (neck strain) has landed on the DL, prompting the promotion of top prospect Odor. Is Odor ready? More than likely not, but until Jurickson Profar is ready to return from the DL, desperate times have forced the Rangers’ hands. At Double-A Frisco, Odor had six homers and six steals in 129 at-bats, so the potential is intriguing. Just don’t overspend as this is going to be a temporary situation.

Chris Young, SP, Seattle Mariners (CBS: 12 per cent owned, ESPN: 2 per cent): Who would have ever thought we’d be mentioning Chris Young and the words “Fantasy relevance” in the same sentence? (Other than RotoRob, that is, who talked about Young in a Podcast just 10 days ago.) Young has now strung together three consecutive wins after Saturday’s eight-inning gem against the Royals and with the Twins next on the schedule we like the odds that he runs it to four.

Vic Black, RP, New York Mets (CBS: 3 per cent owned, ESPN: unowned): Kyle Farnsworth coughed up another win Saturday, so the Mets have to be losing patience with the mess that is their bullpen. Meanwhile, Black keeps rolling along at Triple-A Las Vegas with three consecutive saves and no walks allowed in his last four appearances. It’s time to find room for him on your bench.

Drew Pomeranz, SP, Oakland Athletics (CBS: 23 per cent owned, ESPN: unowned): The A’s finally ran out of patience with struggling Dan Straily, demoting him to Triple-A Sacramento. Pomeranz took over the rotation spot and responded with five shutout innings of two-hit ball against the Mariners. The A’s will give the 2010 first rounder every opportunity to succeed.

Moises Sierra, OF, Chicago WhiteSox (CBS: 1 per cent owned, ESPN: unowned): Jordan Danks has been dismissed to Triple-A Charlotte, so until the return of Adam Eaton (strained hamstring), Sierra should get PT.

Mike Olt, 1B/3B, Chicago Cubs (CBS: 25 per cent owned, ESPN: unowned): Olt’s three big flies in the last week and seven in 78 at-bats for the season should have your attention.

Rafael Montero, SP, New York Mets (CBS: 12 per cent owned, ESPN: unowned): Jenrry Mejia’s struggles will likely result in a demotion to the bullpen as early as this week. The current favourite to replace him in the rotation is 23-year-old Montero. The strikeout per inning stuff makes him a worthy speculative pick in this week’s FAAB battles.

Jason Motte, RP, St. Louis Cardinals (CBS: 7 per cent owned, ESPN: unowned): Motte is currently rehabbing at Double-A Springfield (four scoreless appearances, one hit, one walk). He’s been clocked in the 95-96 mph range and with both Carlos Martinez and Trevor Rosenthal struggling, he could find a prominent role awaiting his return.

By Tim McLeod
This entry was posted on Sunday, May 11th, 2014 at 3:15 pm and is filed under BASEBALL, The Wire Troll, Tim McLeod. You can follow any responses to this entry through the RSS 2.0 feed. Both comments and pings are currently closed.