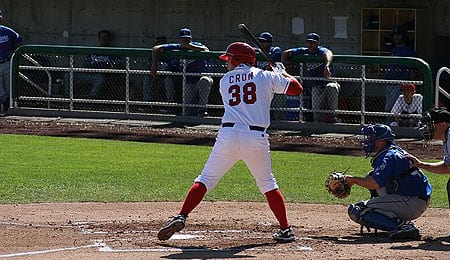 C.J. Cron was an instant hit in Anaheim. (Angelswinblog.blogspot.com)

A new month is here, but it’s the same old story, same old song and dance. The flood of injuries has continued as Bryce Harper, Ryan Braun and Jason Kipnis all hit the DL last week. All three are huge losses and finding adequate replacements will be a challenge.

The Jays bullpen continues to flounder. Sergio Santos has been removed from the closer role after blowing back-to-back saves and the collective group has been absolutely brutal, blowing six saves since the middle of April. Marcus Stroman was about to be called up to help the rotation, but instead he’s been promoted to help provide some relief for their beleaguered bullpen until the return of Casey Janssen.

This week, The Troll focuses on some veterans that might be able to get the job done while we anxiously await the return of the walking wounded.

C.J. Cron, 1B, Los Angeles Angels (CBS: 8 per cent owned, ESPN: unowned): A 3-for-5 debut with two RBI (including the game winner) is a great way to introduce yourself to the Angel faithful (see Cron’s first career hit and RBI in the video below). Down on the farm, he was tearing it up with six homers, 26 RBI and an outstanding .319 BA. The Halos need a spark in their offense and Cron could prove to be just what the doctor ordered. Raul Ibanez could be pushed permanently out of the DH role by a hot-hitting Cron.

Alejandro De Aza, OF, Chicago White Sox (CBS: 38 per cent owned, ESPN: 36 per cent): The White Sox outfield is now short two regulars, with Adam Eaton joining Avisail Garcia on the DL. De Aza is coming off a solid 2013 in which he hit 17 homers and stole 20 bases. Why is he currently owned in only 38 per cent of CBS Leagues?

Jonathan Villar, SS, Houston Astros (CBS: 48 per cent owned, ESPN: 55 per cent): Villar isn’t exactly Mr. Consistency, but you’re talking about a middle-infielder that has the potential to swipe 40 bases and hit for double-digit power. The BA will never be great but take those first two numbers and smile.

Hector Rondon, RP, Chicago Cubs (CBS: 25 per cent owned, ESPN: 16 per cent): Last month, we mentioned that Rondon could work his way into the mix for saves. After Pedro Strop got his shot and failed, Rondon has in fact entered the picture with six consecutive scoreless appearances and back-to-back saves. Rondon has clearly established himself as the go-to ninth inning guy for the Cubbies.

Wilson Ramos, C, Washington Nationals (CBS: 53 per cent owned, ESPN: 37 per cent): Ramos (wrist) is heading out on a rehab assignment and is tentatively scheduled to be activated within the week. A healthy Ramos will go a long way in helping cope with the loss of both Ryan Zimmerman and Bryce Harper.

David Murphy, OF, Cleveland Indians (CBS: 33 per cent owned, ESPN: 17 per cent): Murphy already has 18 RBI and we’re only five weeks into the season, putting him on pace to shatter his career high of 74.

Juan Lagares, OF, New York Mets (CBS: 12 per cent owned, ESPN: 1 per cent): We mentioned a couple of weeks ago that Eric Young Jr. had secured the full-time leadoff role for the Mets. Since then he’s cooled off, opening the door for Lagares and his strong on-base skills. Lagares is worth a look in NL-only leagues.

Jackie Bradley Jr., OF, Boston Red Sox (CBS: 28 per cent owned, ESPN: 2 per cent): After a horrible spring, Bradley has bounced back and is now up to 13 RBI with three stolen bases. In deeper formats it’s time to be buying.

Brandon McCarthy, SP, Arizona Diamondbacks (CBS: 16 per cent owned, ESPN: 2 per cent owned): McCarthy has been on a roll, recording a fourth straight quality start with seven shutout innings Saturday against the Padres. It’s time to find a spot on your roster in mixed leagues.

Grant Green, 2B, Los Angeles Angels (CBS: 5 per cent owned, ESPN: unowned): The Angels finally tired of J.B. Schuck’s .173 BA and called up Green. Green has principally been a middle-infielder, but with both Josh Hamilton and Kole Calhoun likely out until the end of May, Green will get an opportunity to man the outfield.

Jordan Danks, OF, Chicago White Sox (CBS: 1 per cent owned, ESPN: unowned): Danks’s speed potential is worth a look in single format leagues while Eaton spends the next couple of weeks on the DL with a sprained hammy.

Danny Espinosa, 2B, Washington Nationals (CBS: 22 per cent owned, ESPN: 8 per cent): Ryan Zimmerman is not expected back until the end of May, at which point Anthony Rendon will probably shift back to second base. In the interim, Espinosa has been very successful at second base, hitting three homers with four stolen bases and a .286 BA. If you’re in the market for a Kipnis replacement, Espinosa could be your man.

Josh Tomlin, SP, Cleveland Indians (CBS: 1 per cent owned, ESPN: unowned): Trevor Bauer is on fire, having allowed a scant four earned runs in five starts at Triple-A Columbus but the Tribe promote Tomlin. What are we missing? Tomlin will be making his 2014 debut Tuesday against the Twins. Find a home for him in AL-only leagues and wait for the inevitable Bauer sighting.

Chris Withrow, RP, Los Angeles Dodgers (CBS: 5 per cent owned, ESPN: 1 per cent): Through 13 appearances, Withrow has given up one earned run while racking up five holds and 19 strikeouts in 13 2/3 IP. He’s been way too good to be owned in so few leagues.

Crave more in-depth Fantasy analysis? Then join us every Thursday at 9 p.m. EST for RotoRob Fantasy Baseball Weekly Podcast on Blogtalkradio as we entertain and edify you for an hour or more each week. This week only, we move to Wednesday at 1:30 p.m. so the football peeps can take our Thursday night slot and cover the NFL Draft live. On Wednesday, Josh Johnson will host RotoRob Fantasy Baseball Podcast with guest Chris Tubbs of KWSN.com. Tune in here.

By Tim McLeod
Tags: Bryce Harper
This entry was posted on Sunday, May 4th, 2014 at 6:18 pm and is filed under BASEBALL, The Wire Troll, Tim McLeod. You can follow any responses to this entry through the RSS 2.0 feed. Both comments and pings are currently closed.