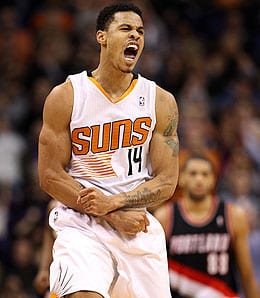 Reggie Jackson, Oklahoma City Thunder: Where would the Thunder have been without Jackson filling two prominent roles during the regular season? With All-Star Russell Westbrook missing several games due to knee surgery, Jackson stepped in admirably as the starter and helped lead the Thunder to the second seed in the Western Conference playoffs. When Westbrook was healthy and in the starting lineup, Jackson served as the valuable sixth man (earning consideration as the NBA Sixth Man of the Year) and sparked the Thunder offensive attack off the pine. For the season, Jackson averaged 13.1 points, 4.1 assists and 1.1 steals per game.

Honourable mention: D.J. Augustin, Chicago Bulls: Acquired via waivers from Toronto early in the season, Augustin sparked the Bulls to another successful season despite the loss of Derrick Rose. Augustin’s scoring off the bench was invaluable and Fantasy owners reaped the benefit of his three-point and free throw shooting expertise.

Jodie Meeks, Los Angeles Lakers: When Kobe Bryant went down with a season ending knee malady, the Lakers weren’t sure who would carry the scoring load from the guard position. Meeks stepped up and established himself as not only a legitimate NBA scorer (15.7 per game) with adept three point shooting (2.1) and eye opening steal totals (1.4), but also a leader (as you can see in the video below). Even if he returns to a bench role next season, he’s a player to keep in mind come draft day.

Honourable mention: Dion Waiters, Cleveland Cavaliers: Waiters finally began to show why he was the fourth overall pick in the 2012-13 NBA draft, averaging 15.9 points and three assists per contest. It should also be noted that he finished very strongly (final third of the season) and fared well when paired with Kyrie Irving as a backcourt starter rather than coming off the pine. Waiters is just health and experience away from being a star.

Gerald Green, Phoenix Suns: This was a hotly contested category with Green and DeMarre Carroll (Atlanta) the clear standouts. Green gets the nod for his outstanding play while guard Eric Bledsoe was sidelined. Green, who played every game for the first time in his career, averaged 15.8 points with 2.5 treys to boot. Like the aforementioned Jackson, Green’s play off the bench when Bledsoe was healthy also contributed to his team, as the were one of the pleasant surprises in the NBA this season. And with all due respect to Coach Gregg Popovich, Phoenix Coach Jeff Hornacek was more deserving as the NBA Coach of the Year (as was Dwayne Casey in Toronto).

Honourable mention: DeMarre Carroll, Atlanta Hawks: Carroll took over as the starting small forward midway through the campaign and proved to be a worthy offensive and defensive contributor. While not known for his overall scoring prowess, he provided ample three pointers, rebounds and steals to solidify many Fantasy teams.

Markieff Morris, Phoenix Suns: This was another closely contested position with Morris getting the call over Terrence Jones (Houston) and Taj Gibson (Chicago). Morris was the most consistent performer of the three candidates, averaging 13.8 points and six rebounds. He also contributed a sprinkling of threes, steals and blocks, making him the most valuable Fantasy performer of the candidates. Many feel Morris deserved to win the NBA Sixth Man of the Year Award — that’s how revered his performance off the Suns bench was.

Honourable mention: Terrence Jones, Houston Rockets and Taj Gibson, Chicago Bulls:  It was virtually impossible to separate these two players so we recognize them both. Jones is a player that improved greatly improved during his second NBA season, but must become more consistent. Gibson will be a force to be reckoned with in 2014-15 if the Bulls move on from Carlos Boozer as rumoured.

Gorgui Dieng, Minnesota Timberwolves: There was not a better Fantasy acquisition than Dieng over the final quarter of the season. With starting centre Nikola Pekovic once again suffering from a variety of leg ailments, it was Dieng (a first round pick last year from Louisville) who stepped in and recorded 12 points, 11 boards and 1.5 blocks per game over the final 18 contests. Now that we can officially stamp Pekovic as a “fragile” player, Dieng should be on your radar and will only get better with additional seasoning.

Honourable mention: Timofey Mozgov, Denver Nuggets: Mozgov is another player that came on strong late in the season when promoted to the starting unit. He had his career game on April 10 with 23 points, 29 rebounds and three blocks versus Golden State.

By Bob Raymond
Tags: Reggie Jackson
This entry was posted on Saturday, May 3rd, 2014 at 8:59 pm and is filed under BASKETBALL, Bob Raymond, The Wire Troll. You can follow any responses to this entry through the RSS 2.0 feed. You can skip to the end and leave a response. Pinging is currently not allowed.