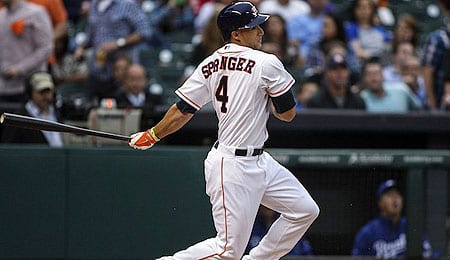 Last week, Houston finally called up George Springer. When you’re coming off a season in which you mashed 37 homers with 108 RBI and 45 stolen bases, you should be plying your trade at the Major League level. Keeping Springer in the minors until June just to avoid his service clock starting is simply not right and this issue is sure to be a hot topic when the new CBA is negotiated in 2016. He’s owned in 93 per cent of CBS leagues, so he won’t be a hot pickup, but if you drafted this young phenom it’s time to enjoy the rewards.

Without further ado, let’s take a look at what the Troll has to offer up this week.

Eric Young Jr., OF, New York Mets (CBS: 49 per cent owned, ESPN: 52 per cent): Young got out of the gate very slowly this season and was at risk of losing at-bats to Juan Lagares. Young has turned his game around nicely, swiping 10 bases in his past 11 games. He has struck out an alarming 22 times in 59 at-bats, but when he does find his way down the line, he’ll be a huge asset in the speed game.

Edinson Volquez, SP, Pittsburgh Pirates (CBS: 37 per cent owned, ESPN: 11 per cent owned): The Pirates are very quickly gaining a reputation for resurrecting pitchers with Volquez being the latest successful reclamation project. In 27 starts last year for the Padres he struggled mightily, posting a horrendous 6.01 ERA. This year he looks like the Volquez of old with the key being control: a stingy four walks in 21 IP. He’s even helping himself on defense (see video below). Francisco Liriano, Part Two?

Mike Zunino, C, Seattle Mariners (CBS: 46 per cent owned, ESPN: 8 per cent): Zunino is off to a fast start with three homers in 45 at-bats, but is still owned in less than half of Fantasy leagues. Why his ownership is so low is puzzling but at the very least he should fill the second catcher slot in two-catcher sets.

LaTroy Hawkins, RP, Colorado Rockies (CBS: 44 per cent owned, ESPN: 72 per cent): Hawkins not only has the ninth inning gig for the Rox, but he’s a perfect 5-for-5 in the saves department. Yes, he’s 41, but it’s not like he’s looking over his shoulder as Rex Brothers continues to struggle with his control. A save is a save is a save. Take them and be thankful as it could be much worse. Just ask owners that gambled on Jose Valverde or J.J. Hoover.

Jon Singleton, 1B, Houston Astros (CBS: 18 per cent owned, ESPN: unowned): In 67 at-bats at Triple-A Oklahoma City, Singleton has mashed seven homers with 23 RBI, and is hitting .343. Given that his principal roadblock to playing time is Marc Krauss (currently struggling with one homer, two RBI, and a .143 BA), Singleton should get the call soon. You’ve treated your fans with the Springer callup, Houston. Now spoil them a little bit more and free Singleton before June.

Yasmani Grandal, C, San Diego Padres (CBS: 19 per cent owned, ESPN: unowned): Grandal has dealt with plenty of hiccups in his young career, including missing most of 2013 with a torn ACL. He’s healthy now, so don’t snooze on the opportunity to roster this kid as he can flat out hit.

Colby Rasmus, OF, Toronto Blue Jays (CBS: 43 per cent owned, ESPN: 44 per cent): Rasmus will never hit for average, but you can bank on 20-plus homers.

Derek Dietrich, 2B, Miami Marlins (CBS: 13 per cent owned, ESPN: 2 per cent): Is Rafael Furcal going to reach 200 at-bats for the Marlins in 2014? I’ll take the under and roster Dietrich, who already has three homers.

Zach McAllister, SP, Cleveland Indians (CBS: 52 per cent owned, ESPN: 4 per cent): McAllister has posted back-to-back solid outings against the Tigers and Padres in which he walked only two. The Royals and Giants are next on the schedule in a two-start week which makes him a solid streaming option.

Tyler Lyons, SP, St. Louis Cardinals (CBS: 2 per cent owned, ESPN: unowned): Lyons is the early favourite to get the call to replace the injured Joe Kelly in the Cardinal rotation. Carlos Martinez owners are going to have to be content with him pitching out of the bullpen in 2014.

Ike Davis, 1B, Pittsburgh Pirates (CBS: 19 per cent owned, ESPN: 1 per cent): Davis’ change of scenery can’t hurt, unless you happen to be a Gaby Sanchez owner.

Lucas Duda, OF/1B, New York Mets (CBS: 21 per cent owned, ESPN: 4 per cent): With Davis being dealt to the Pirates, Duda will get a full-time job, and thankfully it’s not in the outfield. This is the year Duda will finally break the 20-homer barrier.

Josh Reddick, OF, Oakland Athletics (CBS: 38 per cent owned, ESPN: 40 per cent): After a dreadful start, Reddick is finally showing some life. In the last two games, he’s 6-for-9 with his first homer. It’s a start.

Craig Gentry, OF, Oakland Athletics (CBS: 3 per cent owned, ESPN: unowned): The Oakland outfield consists of Coco Crisp, Reddick and Yoenis Cespedes. There is a need for a fourth outfielder with that group and Gentry will get enough PT this year to have value.

Nick Franklin, 2B, Seattle Mariners (CBS: 20 per cent owned, ESPN: unowned): Franklin was on a tear at Triple-A Tacoma (four homers, 13 RBI, .395 BA), thereby earning a promotion when Logan Morrison (hamstring) hit the DL. Could Franklin be another middle infield to outfield conversion for the M’s?

Jarrod Dyson, OF, Kansas City Royals (CBS: 4 per cent owned, ESPN: unowned): In a shocking development, Lorenzo Cain is on the DL, opening up more PT for the speedy Dyson.

Robinson Chirinos, C, Texas Rangers (CBS: 1 per cent owned, ESPN: unowned): It didn’t take the Rangers long to figure out that J.P. Arencibia isn’t the answer at catcher. Geovany Soto will be out until mid-season, affording Chirinos a great opportunity to show off his skills.

Crave more in-depth Fantasy analysis? Then join us every Thursday at 9 p.m. EST for RotoRob’s Fantasy Baseball Weekly Podcast on Blogtalkradio as we entertain and edify you for an hour or more each week. We’re off this week because of the NHL Playoffs, but RotoRob will return on April 24 with RotoRob.com NFL Writer Vaney Hariri. We may have a special guest as well (Bob Kendrick, President of the Negro Leagues Baseball Museum). Tune in here.

By Tim McLeod
Tags: Houston Astros
This entry was posted on Sunday, April 20th, 2014 at 2:48 pm and is filed under BASEBALL, The Wire Troll, Tim McLeod. You can follow any responses to this entry through the RSS 2.0 feed. Both comments and pings are currently closed.