The Wire Troll: Jack of All Trades 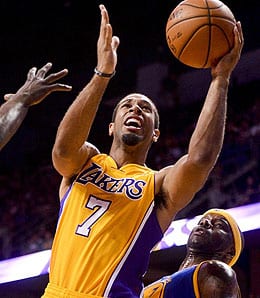 Xavier Henry has a chance to shine for the Lakers over the next few weeks. (Defpenradio.com)

Once again, injuries play a key factor in this week’s edition of The Wire Troll. The Lakers will have to live without Kobe Bryant for another six weeks (knee); Kirk Hinrich (back) is showing signs of wear wand tear in the Windy City; and Kevin Garnett and the boys in Brooklyn seem to be an everyday “lineup” roulette.

Xavier Henry, SG/SF, Los Angeles Lakers: Henry has failed to gain any Fantasy traction since he caught our eye in our 2010 NBA Mock Draft when he was a Jayhawk prospect, but with Bryant, Steve Nash, Jordan Farmar and Steve Blake all missing from the Laker backcourt, Henry is going to get tons of playing time and scoring opportunities over the next several weeks. On Friday, Henry gave us a preview with 21 points, four assists and three steals in a whopping 42 minutes of action. Oh, and his dunking ability (see video below) has him being mentioned in the same sentence as LeBron James.

D.J. Augustin, PG, Chicago Bulls: Augustin was signed by the Bulls after clearing waivers recently. He began his career in Charlotte as a first rounder out of the University of Texas — known for producing NBA point guards. However, Augustin was unable to solidify his claim to the starting job for Michael Jordan’s team and was later shipped to Indiana before signing with Toronto in July. Augustin now has yet another opportunity, thanks to injuries to Derrick Rose and Hinrich. In three starts for the Bulls, Augustin has averaged just over 12 points, seven assists and one steal per game.

Jarrett Jack, PG/SG, Cleveland Cavaliers: One of the mysteries of the 2013 offseason was why the Warriors weren’t interested in re-signing Jack. In 2012-13, he was the “glue” in Golden State as its sixth man, averaging 12.9 points and 5.6 assists while hitting 40 per cent of his three-point attempts. Of course, the Warriors surprised Denver in the first round and then took the San Antonio Spurs to six games in the Western Conference semifinals. Jack moved on to Cleveland and is now beginning to gel with his new teammates. He has been very effective over the past several games and is once again proving he’s a Fantasy worthy combo guard.

Jared Dudley, SF, Los Angeles Clippers: Apparently, Coach Doc Rivers finally told Dudley to “shoot the rock.” After being a non-factor in the Clips offense to begin the season, Dudley has been lighting it up the past three games. He has registered 16 points and three treys per contest since becoming more aggressive on the offensive end. The Clips need Dudley’s scoring touch with J.J. Redick (hand) sidelined.

Vince Carter, SF/SG, Dallas Mavericks: Carter was a very useful Fantasy performer last season and a clutch player off the Mavericks bench. It has taken him time to produce useful numbers this season, but gradually we see that happening. While Carter doesn’t excel in one or two Fantasy categories, he’s the type of performer who will satisfy your appetite in several areas provided he gets (and can handle) ample playing time from coach Rick Carlisle.

Alan Anderson, SF/SG, Brooklyn Nets: Anderson has wrestled the starting small forward job away from Paul Pierce (who is shockingly now the sixth man) and is making the most of the opportunity. On Friday, Anderson had 26 points (five treys), five rebounds and two assists against Philadelphia. Anderson has always been known for his shooting touch and is one to watch.

Giannis Antetokounmpo, SF/SG, Milwaukee Bucks: Yes the “spell check” button on our computer just exploded after seeing Antetokounmpo appear. Undoubtedly he also possesses the best nickname in the NBA — Alphabet, which needs no explanation. The 19-year-old Greek was the Bucks’ first rounder this year and is flashing lots of potential. Thanks to the Bucks numerous injuries and poor record, coach Larry Drew has decided to put Antetokounmpo into the starting five and let him develop. Watch the rook closely.

Andrew Bynum, Cleveland Cavaliers: While Bynum is owned in just over 50 per cent in most leagues, we have included him in this edition regardless. After all, free agent Fantasy centres are hard to find and Bynum has experienced some quality games for the Cavs. If you want to roll the dice and see if you can catch lightning in a bottle, go for it. However, if you’re looking for consistent production and results, he’s not your man. That’s not even discussing his past knee problems and subsequent missed games.

Markieff Morris, C/PF, Phoenix Suns: We recommended Morris last month, and he deserves a second shout out because he’s now Centre eligible, which truly increases his Fantasy value. If you’re in need of centre help, get Morris now!

Now it’s your turn. Feel free to add your two cents regarding these players or others of interest in the comments section below.

By Bob Raymond
Tags: Los Angeles Lakers
This entry was posted on Saturday, December 21st, 2013 at 6:50 pm and is filed under BASKETBALL, Bob Raymond, The Wire Troll. You can follow any responses to this entry through the RSS 2.0 feed. Both comments and pings are currently closed.