The Wire Troll: Markieff Morris is a Rising Sun 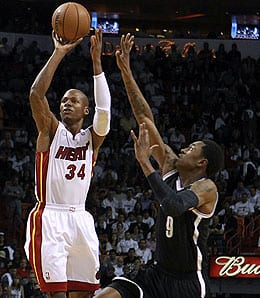 Ray Allen can still light it up for the Heat. (AP Photo/Miami Herald, Charles Trainor Jr.)

Welcome to this week’s edition of The Wire Troll, in which we provide you with players that may be flying “under the radar” in your Fantasy basketball league.

The defending champion Miami Heat offer a pair of guards that can help in the way of threes, steals and assists — point guard Mario Chalmers and reserve shooting guard Ray Allen.

Chalmers has made it known that he intends to lead the league in steals and his 2.5 per game average is certainly impressive. In addition, Super Mario is averaging 5.2 assists. The fact that he’s 12-for-22 (55 per cent) from three-point land should motivate owners even further. Oh, and it doesn’t hurt that he’s a tough dude, as you can see from the video below.

As for future Hall Of Famer Allen, he just keeps on ticking. In his second season with the Heat, he is showing signs of being more comfortable with the offense as evidenced by his 12 points, 3.2 rebounds and 3.6 assists per game. He’s also shooting 38 per cent from beyond the three-point arc, only adding to his value.

And speaking of sharp shooters, Kyle Korver is once again quietly shooting accurate darts for the Atlanta Hawks. The starter at the two guard position is off to a fantastic start, averaging 14.4 points while making 13-of-20 three-pointers (65 per cent). Korver is the beneficiary of a permanent job this season following the defection of Devin Harris, so he’s logging 30-plus minutes per game. Scoop up Ashton Kutcher if he’s available.

We’ve always been fans of players who hail from the University of North Carolina basketball program and John Henson is yet another former Tar Heel with terrific skills and potential. He has been thrust into additional playing time early on because of Larry Sanders’ inefficiency and Ersan Ilyasova’s ankle problem and has responded by registering 11.5 points on 67.7 FG percentage, 5.5 rebounds, one steal and 1.8 blocks per game. There is terrific upside with Henson if he continues to get the minutes from coach Larry Drew.

The Morris brothers (Markieff and Marcus) from the University of Kansas were reunited on the Phoenix Suns. While both have been seeing action on the hardwood, Markieff is the Fantasy player to watch. Over the past three games, he has scored 23, 17 and 28 points, respectively, averaging nine boards and two steals over this stretch. Don’t be shocked if we soon see Markieff replace Channing Frye in the Suns starting lineup.

Michael Kidd-Gilchrist was drafted second overall in the 2012 NBA draft, but his rookie season led many to wonder if he was overvalued by the Charlotte Bobcats. He left the heralded Kentucky program early, struggling with his scoring as a pro and not developing into much of a Fantasy factor as a result. This season, MKG is starting to display signs of life, averaging 11.5 points, 6.2 rebounds and 1.7 blocks. Most importantly, his FG percentage has risen from 46 to 56 per cent. If Gilchrist is indeed figuring out the NBA game, watch out in the future as he has across-the-board skills potential.

Boris Diaw is a perfect fit for the San Antonio Spurs. He is an internationally-trained role player that can play several positions including centre. It is that centre eligibility that gives him value in Fantasy circles. Diaw is averaging 12.4 points (51 per cent from the field), 4.6 rebounds and two assists in less than 30 MPG. If you’re in need of help at the five, Diaw may be your man.

As we mentioned earlier with Henson, Zaza Pachulia has also seen extra PT because of the issues in Milwaukee’s frontcourt. The veteran big man has been a pleasant surprise for the Bucks, registering 13.3 points, eight rebounds, 3.5 assists and one steal per game. It remains to be seen if Zaza will continue to get enough minutes to be Fantasy worthy, but the sitation certainly bears watching.

Now it’s your turn. Who is your favourite Fantasy basketball waiver wire pickup of the week?

By Bob Raymond
Tags: Mario Chalmers
This entry was posted on Saturday, November 9th, 2013 at 6:37 pm and is filed under BASKETBALL, Bob Raymond, The Wire Troll. You can follow any responses to this entry through the RSS 2.0 feed. Both comments and pings are currently closed.