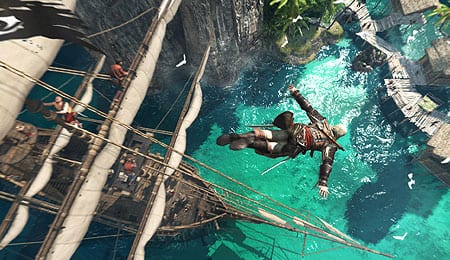 As much as we’ve enjoyed the Assassin’s Creed franchise, we elected to bide our time and wait for the next-gen launch to experience the newest release, Assassin’s Creed IV: Black Flag. We also harboured some mild reservations about the game, given its focus on naval combat — a part of last year’s ACIII that we didn’t enjoy all that much. Thankfully, such concerns proved unfounded.

Not much has changed in regards to the combat and exploration portions of ACIV. The right trigger still acts as a modifier to switch between casual and active commands, and you’ll smoothly spring over objects, clamber up buildings and leap from tree to tree with great ease… about 99 per cent of the time — they just can’t weed out that awkward one per cent, though, as there are still those moments when you’ll climb something you had no intention of climbing or jump in front of an enemy rather than silently killing them (and trigger an alarm in the process).

On the bright side, naval combat feels much improved. You have three different speeds at which to navigate the ship, and your full complement of weaponry is used contextually based on how you position the camera. For example, looking straight ahead allows use of mortars or a chain shot. Tilt until you’ve got a starboard or port view, however, and you’ll be firing cannons; look behind and you’ll drop explosive barrels into the water. Disabled vessels can be boarded if you come up alongside them, and outside of some trouble gauging distance between ships, it worked well.

Most of my complaints with the controls, whether on foot or at sea, stem from large-scale battles in which things get a little confusing. Most of the damage we took in hand-to-hand combat came from failed counters against multiple enemies — this is most prevalent when fighting on boarded ships as enemies tend to just appear and then attack from off screen. With ships it’s just tough to engage more than one foe at a time as you can easily lose track of where enemy projectiles are coming from.

Always a cutting edge series visually, Black Flag carries on Ubisoft’s proud tradition by making an absolutely gorgeous leap to the PlayStation 4 and Xbox One. The Caribbean setting is a nice departure from previous locales, and the combination of lush greenery and beautifully rendered water really bring things to life in vibrant fashion. There’s a ton of small touches in the environment as well with wildlife skittering about and people going about their routines. It doesn’t carry the realism or depth of Grand Theft Auto V’s sandbox, but it’s still an excellent job.

Character models are good, and the fluidity of movement remains a high point. To that end, free running remains awesome even after six full games of it. Watching your character spring over a fence, scale up a wall and then dive gracefully into a pile of hay just looks slick. In combat, counters are vicious, but somewhat limited in scope as we felt like we were seeing the same three or four over and over again. That’s an issue that extends to enemy variety as well with only a few archetypes.

While voice acting is reasonably well performed, we had trouble keeping track of the various characters. We realize these are supposed to be “famous pirates,” but there are no names like Da Vinci or Franklin in the group, and without that, the similar-sounding accents bleed together. Granted, that’s more an issue with the story and writing than the acting, but none of the performances stand out, either. The music is good, and the sea shanties are pretty cool (at least until you hear them for the 20th time) as well.

Chronologically, Black Flag actually takes place before last year’s Assassin’s Creed III. It follows the adventures of pirate Edward Kenway, whose surname should be familiar to series veterans as he’s Connor’s paternal grandfather. Freed from the constraints of being an assassin, Kenway is much more lively and interesting as a main character than Connor. He definitely shades toward the selfish side, which wears thin as desire becomes obsession, but he is generally likeable.

Although Kenway is a step up from Connor, the overall storyline falls a little flat. Without the well-known historical backdrop of revolutionary America, the lack of character development and failure to create interesting friends and foils ends up front and centre. As already noted, we had a tough time keeping track of the players — to whit, it’s not a good thing when you’re supposed to be getting revenge on some traitor and can’t even pinpoint how (or when) they betrayed you in the first place.

There’s more to the story than just the characters, though, and the main arc is semi-interesting. Your goal is to locate a mysterious observatory, which coincides with what the assassins want and allows you to side with them in their ongoing feud with the Templars. To find it, you’ll need to track down the Sage, who is the only person that knows its location. Along the way you’ll run afoul of both the British and Spanish, who have decided the time has come to rid the waters of pirates.

As usual, there’s a story taking place outside the Animus as well. With Desmond gone, you take on the role of an unnamed Abstergo employee that’s ostensibly accessing the animus to extract footage that can be made into a video game. That’s just a front, of course, and you soon find yourself doing sketchy things for an I.T. guy with ulterior motives. It’s well done and a definite step in the right direction when compared to the “same stuff, different century” exploits of Desmond.

Whatever shortcomings the story has, the campaign is still arguably the series’ best thanks to the added freedom of exploration and refined naval combat. The world of ACIV is a massive one, and unlike the slow introduction to ACIII you’re unleashed early on and free to explore it. As you’d suspect there’s loads to find from old standbys like treasure chests and animus fragments to Mayan artifacts. They’re really just carrots to encourage you to branch out, but they do provide the impetus for those that demand a tangible reward for exploration.

And then there’s the open sea. It can be a little intimidating at first, but once you get the hang of it there’s an undeniably addictive quality to it. Incapacitating boats allows you to board them, which when done successfully grants you all that ship’s cargo — you can also sink the boat at the cost of half the payload. Some cargo is meant to be sold for money, while other materials are needed to upgrade your own vessel.

You’ll need to put in some real time to max out your ship with upgrades locked away behind high costs in money and raw materials. It’s a smart move that prevents you from piecing together a floating barge of death, allowing later missions in enemy-controlled waters to retain a sense of concern — it’s much easier to be defeated at sea than on land. Beyond the combat, you’ll also take part in harpooning in a surprisingly fun mini-game. Shark and whale skins/bones are then used to improve Edward’s equipment, or they can be sold for extra loot.

As much as we enjoyed the naval combat, there were times when it really felt like the game was trying to intentionally stack the deck against the player as one-on-one battles with a well-matched opponent would suddenly (and inexplicably) become three-on-one plus a freak storm. It directly led to most of our deaths, and the need to look where you’re aiming also makes it easy to run aground on some small patch of land — another easy way to get desynchronized.

In addition to the campaign, Black Flag retains the franchise’s unique multiplayer, offering up the cat-and-mouse setup with a few tweaks. The fact that it’s such a departure from the usual multiplayer affairs makes it a nice change of pace as you try to convince other human players you’re an A.I. while they try to do the same with you. That being said, as much as we enjoy it, we find the mode to be best suited to shorter gameplay sessions than the standard PvP fare.

We’ve enjoyed every game in the Assassin’s Creed series, and Assassin’s Creed IV: Black Flag is no exception. Despite a somewhat muddled story, the world is so vast, beautifully created and packed full of activities it’s easy to spend hour after hour just exploring. If you felt constricted by ACIII, this is the open-world adventure you’ve been waiting for.

By Herija Green
Tags: Assassin's Creed, Assassin's Creed IV: Black Flag
This entry was posted on Sunday, December 22nd, 2013 at 9:47 pm and is filed under Herija Green, Video Game Reviews. You can follow any responses to this entry through the RSS 2.0 feed. Both comments and pings are currently closed.