RotoRob MLB Editor Tim McLeod made the pilgrimage south to Milwaukee in early May to watch the Brewers take on the St. Louis Cardinals. He took a bunch of photos and over the next couple of weeks, we’ll show you what caught his eye in a series of four different galleries.

The Cards won the game, 7-6, when Jon Jay — who had already smacked a three-run homer earlier — drove in the go-ahead run in the top of the ninth and Edward Mujica finished it off with a perfect bottom of the ninth. Allen Craig and Daniel Descalso also went yard for the Cards. 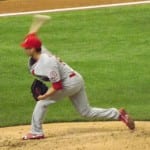 Adam Wainwright surrendered a two-run dinger in the first inning. 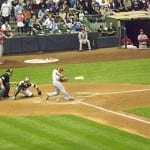 Carlos Beltran was unable to contribute to the Cards’ big day. 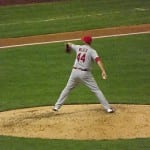 Edward Mujica pitched a perfect frame for the save. 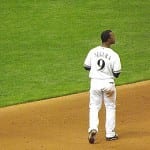 Jean Segura had two hits, including a two-run jack. 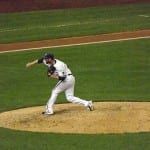 Jim Henderson was touched up and suffered his first loss of the season. 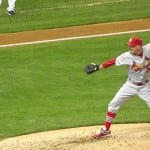 Randy Choate’s only pitch of the game was a strike.

Like our photos? Let us know what you think in the comments below.

By RotoRob
This entry was posted on Monday, October 14th, 2013 at 10:26 am and is filed under BASEBALL, Event coverage, Gallery, RotoRob, Tim McLeod. You can follow any responses to this entry through the RSS 2.0 feed. You can leave a response, or trackback from your own site.