RotoRob MLB Editor Tim McLeod made the pilgrimage south to Milwaukee in early May to watch the Brewers take on the St. Louis Cardinals. He took a bunch of photos and has finally figured out how to get them off his camera and press send on his email client! Yes, we are very proud of him. And over the next couple of weeks, we’ll show you what caught his eye in a series of four different galleries.

The Cards won the game, 7-6, when Jon Jay — who had already smacked a three-run homer earlier — drove in the go-ahead run in the top of the ninth and Edward Mujica finished it off with a perfect bottom of the ninth. 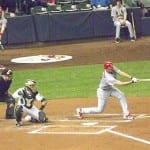 Adam Wainwright shows he’s a great pitcher with his work at the plate. 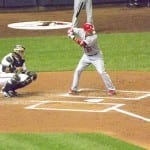 Allen Craig had two hits, including his first homer of the season. 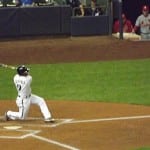 Jean Segura was not cheated on this swing, and he had a sweet game. 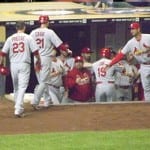 Jon Jay receives congratulations after his three-run homer in the second inning. 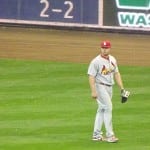 Matt Holliday took an 0-for-4 and struck out once. 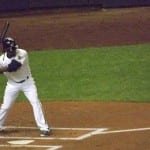 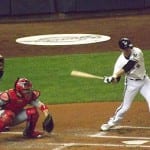 Ryan Braun, still playing back then, didn’t do much with his juiced stick. 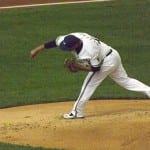 Yovani Gallardo wasn’t awful, but the two homers he allowed ruined his outing.

Crave more in-depth Fantasy analysis? Then join us every Thursday at 9 p.m. EST for RotoRob’s Fantasy Baseball Weekly Podcast on Blogtalkradio. Tim McLeod and RotoRob will entertain and edify you for a half hour or more each week. Tonight, RotoRob is off at the Shadowy Men on a Shadowy Planet concert, so Tim will be joined by Howard Bender. Tune in here.

By RotoRob
This entry was posted on Thursday, September 19th, 2013 at 2:05 pm and is filed under BASEBALL, Event coverage, Gallery, RotoRob, Tim McLeod. You can follow any responses to this entry through the RSS 2.0 feed. You can leave a response, or trackback from your own site.