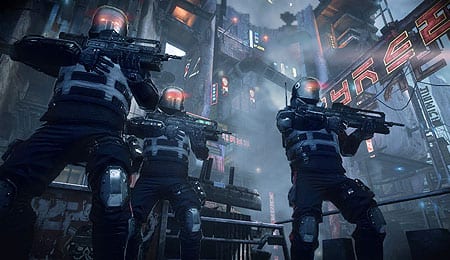 The No. 1 rated show on Helghan? Yep, you guessed it. Cops.

Ever since Sony revealed the PlayStation Vita would have two analog sticks, fans have been salivating at the prospect of a console-quality shooter on a handheld. More than 18 months into the system’s life cycle and they’re still waiting, their Pavlovian response evolving into one of skepticism after high-profile franchises like Resistance and Call of Duty missed the mark. That all changes on September 10. Shooter fans rejoice, your portable salvation is at hand, and its name is Killzone: Mercenary.

Responsive aiming, a smartly designed HUD and effective use of the Vita’s touch screen make Killzone handle like a dream. Even without benefit of the PS3’s shoulder buttons, I never felt limited by the layout as the game compensates beautifully. Switching between guns, interacting with objects, equipping grenades and activating your VAN-guard are all done by touch (similar to Unit 13). It works great, but if for some reason you don’t like it, the d-pad duplicates those functions.

In fact, the only times you’re required to use the touch screen is for brutal melee kills, when you trace directional arrows, pulling down levers and hacking terminals. Some of the VAN-guard abilities also necessitate the use of the touch screen, such as a shoulder-mounted missile launcher that fires when you tap targeting circles on enemies. Whatever your feelings on touch controls, everything here feels very natural, and the user interface is among the best I’ve seen.

One item does hold Mercenary back from perfection, however, and that’s the mapping of both crouch and sprint to the same button. Theoretically it works like this: if you’re stationary and hit it, you kneel down, whereas if you’re moving, you start move a lot faster. The problem is that you must crouch to enter into cover, and there were times when I wanted to get behind something and instead went sprinting to my untimely death. That being said, it’s a nuisance at worst.

Without question, Killzone: Mercenary is the most technically impressive and visually stunning title on the system to date. Everything looks clean and crisp, and although the vast majority of the game takes place in developed areas (buildings, ships, etc.), I didn’t feel like I was traversing the same ground. More than anything I’ve played on the Vita, this feels like a console game projected onto the smaller screen — everything loads and runs smoothly with nary a hit to the frame rate.

Although there aren’t a lot of cut scenes, the contract briefings that serve to move the story forward do a nice job and deserve their share of praise. From start to finish these look absolutely believable with layouts, plans and statistical variables flashing in front of your eyes, passing along mission-critical data and fragments of personal info. As good as they are, eventually you’ll wish you could bypass them, but there appears to be no way to skip them (likely because they’re covering the loading process).

Voice acting is rock solid throughout, but there aren’t really any meaty parts to invest in so it never serves to elevate the game. The soundtrack is also good, though the real star attraction here are the booming effects. Gunfire and explosions have great impact, and the screams of your fallen foes echo through the Vita’s speakers. Top to bottom, the presentation values in Mercenary are beyond reproach, making it the system’s new measuring stick.

In Killzone: Mercenary you play as gun-for-hire Arran Danner, a one-time solider in the United Colonial Army that has been enlisted to help the ISA (Interplanetary Strategic Alliance) mount a counterattack against advancing Helghast forces. Unlike Burning Skies, which felt completely encapsulated from the Resistance series, Mercenary retains the mythos with a side story that comes across as meaningful.

Early on it seems like you’ll be running straightforward missions for the ISA, but things change when you’re sent to the capital city of Helghan to extract an ambassador. Instead of a simple extraction, things go sideways, putting you the middle of a desperate tug of war between the ISA and the Helghast with the outcome of the war potentially hanging in the balance. While not a gripping story, it doesn’t feel like a throwaway and is good enough to drive the action.

That action plays out across nine chapters, which took around four hours to complete on the default difficulty setting. The game does a nice job of allowing you to play how you’d like with the in-game arms dealer offering all kinds of primary/secondary weapons and armour to tailor your experience. Enemy A.I. is generally solid with soldiers flanking your position, but it still teeter totters between oblivious and supernaturally aware at times.

All of your substantive actions throughout the campaign (and other modes) offer monetary rewards with bumps in payout for things like headshots or silent kills. Money is then used to buy new weapons, grenades, armour and VAN-guard loadouts. Mid-mission resupplies and equipment changes will also set you back a few bucks — a necessity lest the frequently placed crates undermine the challenge.

Upon completing the nine-mission campaign you’ll have the ability to go back and replay them using new sets of requirements. Each one has three contract classifications (precision, covert and demolition) with a corresponding list of objectives you have to fulfill to successfully cash in the contract. It adds some longevity to the single-player, but it’s not without its issues.

Ostensibly, each contract type is designed to make you adapt to a specific style. For example, precision limits the time you can take, covert may ask that you remain undetected for sections, and demolition pretty much wants you to cause havoc. Forget that some objectives are counter-intuitive to one another (or at least may require failed attempts to carve out the best path), the real issue comes with the covert missions during which your A.I. teammate can blow your cover.

Want to talk frustration? Try carefully picking off a half-dozen Helghast undetected only for your partner to drop down in full view as “Mission Failed” appears on the screen. Even when they don’t FUBAR the mission, the Helghast will go on full alert if they even see a body. That’s fine if they’re elevated, but if they haven’t actually spotted you it seems unfair that your mission can be aborted.

On the multiplayer side, Killzone: Mercenary launches with six maps and three game modes: free-for-all, Team Deathmatch and Warzone, which features evolving objectives over five phases that mix familiar gameplay types into one prolonged battle. Based on the beta, Mercenary immediately moves to the top of the Vita multiplayer world and gives handheld fans an online destination. The action is fast paced, progression is steady and the connection was generally good.

Unfortunately, despite multiple attempts, I was unable to test the full version of the multiplayer given the low number of people in the U.S. with the game (servers are region locked). Therefore I plan to play some multiplayer on launch day, and if there’s anything that warrants an addendum to the review it will be made at that time.

This is the portable shooting experience fans have been waiting for. With first-rate graphics and tight gameplay, Killzone: Mercenary delivers a great first-person shooter that just happens to run on the PlayStation Vita. If you have a system, you need this game.

By Herija Green
Tags: PlayStation Vita, Sony
This entry was posted on Friday, September 6th, 2013 at 9:20 am and is filed under Herija Green, Video Game Reviews. You can follow any responses to this entry through the RSS 2.0 feed. Both comments and pings are currently closed.