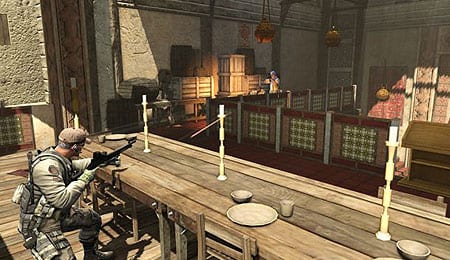 Cover is your best friend in Unit 13.

Developer Zipper Interactive has watched its signature series, SOCOM, experience a fall from grace over the years as the one-time powerhouse has struggled to transition to the PlayStation 3. Conversely, its handheld titles were among the best the PlayStation Portable had to offer, so it should come as no surprise it was tabbed to usher in the third-person shooter era on the Vita. Rather than reboot SOCOM, however, Zipper has rolled out Unit 13, a fun, if somewhat shallow, title.

While most of the Vita’s games control admirably, none of them blend traditional controls with the touch screen as seamlessly as Unit 13. All moment to moment functions such as aiming, entering cover and shooting are handled with the standard controls. However, contextual actions — mantling, interacting with an object or aiming down the scope — pop up on the side of the Vita screen for easy access.

Outside of a few structural weaknesses, such as the inability to transition between cover, which can be a real hindrance during stealth missions, the controls hold up extremely well.

Character models look good and move fluidly, even if your enemies tend to have a similar appearance with many of them sporting face-covering garb. Lack of variety is also an issue in the environments as there is a tight rotation of locales that are visited throughout. Technically, however, everything looks pretty good with the Vita’s vibrant OLED screen once again popping with colour. Outside of some occasional drops in the frame rate, it’s a smooth experience.

Voice acting in the mission briefings is solid, as are the sporadic one-liners from the combatants. During the levels themselves the sounds of cameras panning, explosives beeping and guards chatting help keep you aware of your surroundings. Gunfire and other sound effects do their job as well.

Rather than offering gamers a traditional campaign mode, Unit 13 instead presents a collection of 30-plus completely self-contained missions to choose from. These missions fall under one of four categories: direct action, covert, elite and deadline. Some offer flexibility in their completion while others require you to fulfill specific criteria. For example, covert operations will end in failure if you’re spotted and an enemy is able to sound the alarm.

Each of these compartmentalized undertakings has a pre-launch breakdown, which provides a brief back story for the operation along with difficulty and length outlooks. Early on you can expect low difficulty and short run times, but as you progress and more missions unlock things can get decidedly tougher, especially with the elite missions as those do not offer checkpoints.

Unit 13’s structure proves to be a double-edged sword. On the one hand, the ability to play and complete a level in a matter of minutes is a perfect structure for the Vita. However, without a cohesive storyline to pull everything together, the game lacks focus. Nothing you do in one mission carries over to the next. There’s no villain pulling the strings, no tangible threat to national security and not even some canned spec ops bravado to offer a connection to the squad.

Without that, the gameplay becomes the unquestioned focal point with all its strengths and weaknesses magnified in the process. On the plus side, Unit 13 is fun to play. It’s also loaded with content; beyond the aforementioned levels, there’s also a series of high-value target missions and a daily challenge offered online. Speaking of which, each level can also be tackled co-operatively online, though the stability of it and ease of finding a match are less than ideal.

In terms of drawbacks, the biggest one has to be the schizophrenic A.I. (even within the same level). At some points your enemies appear completely oblivious to the comings and goings around them as you pick off nearby baddies without so much as an inquisitive glance. Then, on the other end of the spectrum, there are times when a silenced pistol shot will alert guards on another floor… in fact, I’ve even had melee kills tip off roving patrols. It’s a bitter pill to swallow when an otherwise flawless covert operation goes sideways when some clairvoyant terrorist miraculously detects you.

There’s also a canned feeling to the encounters as you’ll come across guards that are just standing around waiting for you to reach a specific point to trigger their movement. None of it is game breaking, but with no story elements these are the types of things that stick out.

At the end of each mission your points will be tallied up based on your time, accuracy and how quickly and efficiently you killed your enemies (there are also some level-specific bonuses, such as not being detected in a covert operation). The points are then applied to one of six characters’ experience level, which can go up to 10 and unlocks additional perks as you progress. It’s a solid enough system, and because each member has unique strengths and weaknesses, you’re likely to use them all.

Even at the height of Zipper Interactive’s SOCOM run, storytelling was never its strong suit; crafting engaging third-person gunplay was, and that is alive and well in Unit 13. As long as you don’t need much exposition with your shooting, this game has a lot to offer.

By Herija Green
This entry was posted on Wednesday, August 8th, 2012 at 12:15 pm and is filed under Herija Green, Video Game Reviews. You can follow any responses to this entry through the RSS 2.0 feed. Responses are currently closed, but you can trackback from your own site.