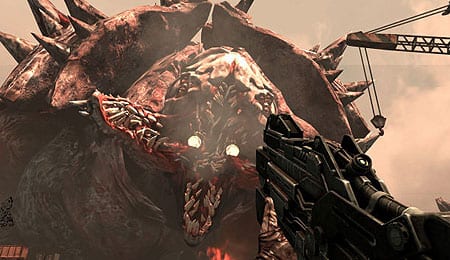 You are one ugly mother…

While Sony’s PlayStation Vita has many obvious enhancements over its Portable predecessor, ranging from superior graphics to touch screen implementation, the addition of a second analog stick was perhaps the most exciting feature for core gamers because it created the possibility of a truly console-like experience from a handheld system. Sony pegged Resistance, one of its top exclusives, to usher in this new era with Burning Skies. But is it the portable first-person shooter gamers have always wanted?

Not surprisingly, Resistance: Burning Skies is most responsive FPS to date on a handheld. The dual analog sticks mirror what you’d find on the PS3 or Xbox 360, and the default sensitivity makes zeroing Chimera a breeze. Grenades and melee attacks are smartly mapped to the right-hand side of the touch screen, and the radial weapon menu is easy to navigate.

Where things feel somewhat forced is with each weapons’ secondary fire mode. Here you’ll need to tap the screen to launch grenades, load explosive crossbow bolts and more. It’s generally solid, but there are still times when it feels slow and awkward.

Although this is one of Sony’s signature franchises, I never felt like Burning Skies pushed the Vita’s capabilities the way Golden Abyss or even Rayman did. Outside of some choppy cut scenes in between levels, everything is technically solid; it’s just that the world feels small. Most of the game takes place in hallways or large, Chimera filled rooms, which creates a sense of sameness that permeates the game. Add to that some sterile, paint-by-numbers detail work and you’ve got a completely serviceable, yet totally unremarkable presentation.

There isn’t a lot of story to be relayed through voice acting, and what’s present is missing the proper blend of emotion and desperation to fit the circumstances. A decent soundtrack and gunfire that packs an impact help make up for it, though.

Set during the Chimeras’ initial invasion of the United States, Burning Skies follows the exploits of fireman turned commando Tom Riley. Of course, as with most games that cast an “unexpected hero,” Riley’s lack of military training doesn’t impede his ability to mow down enemies. As such, the only reminder that Riley is/was a firefighter is that his trusty axe doubles as your melee weapon.

Riley’s story is a familiar one as he’s drawn deeper into the conflict by the abduction of his wife and young daughter. With them gone, his only option is to go after the Chimera head on in hopes that he can rescue them from their fate. Thus sets in motion the game’s six-chapter story, which should run roughly 5-to-6 hours depending on skill and difficulty level.

Combat here is typical FPS fare with some cover-based elements worked in. Crouching behind an object shields you from enemy fire, and you pop up by pressing the left bumper to aim down sight. Most of the game is made up of large firefights of this variety, though there are some sections where you’ll advance through passageways and battle limited numbers of foes.

Unfortunately, with the exception of a few boss battles, Burning Skies rarely strays from that formula throughout the game’s entirety. In addition, the enemies seemed less dangerous than their console brethren. This could be a concession made to give gamers the time to utilize the touch screen for secondary fire, but the result is that there’s less of a challenge. Enemy A.I. is pretty predictable with its attacks as well, and foes tend to leave themselves exposed to weapon fire.

While much of the game is fairly easy, there is a noticeable difficulty spike toward the end as enemies start to toss grenades and overwhelm with huge numbers in rooms that suddenly have far less cover than you’ve grown accustomed to. It’s here that the uneven checkpoint system becomes a source of frustration as you’ll often be forced to slog through multiple battles or listen to the same dialogue again and again as the price of failure. The final boss battle feels cheap, too, as the combination of a small area and poor maneuverability make it an irritating affair.

Despite these shortcomings, the basic combat in Resistance is fun, and it kept me pushing forward when most of my Vita games are played in 20- or 30-minute bursts.

In addition to the campaign, Burning Skies also features a streamlined multiplayer mode. There are three modes: Deathmatch (free for all), Team Deathmatch and Survival (think Infection from Halo) with some having large and small versions based on the max number of players. When you get into games the performance is solid, though the maps lack much personality and seem heavily skewed toward snipers’ camping positions.

Then there is also the matter of actually getting into a game. I lost count of the number of times a room would populate with players only to receive a message that the connection had been lost, at which point I’d be kicked back to the main menu. The only silver lining is that in doesn’t take too long to get the boot, but it’s not good that such issues exist so far after launch.

Resistance: Burning Skies is a solid game that could’ve been a lot more. It’s still fairly enjoyable most of the time, but it’s not the home run Vita owners and franchise fans were hoping for.

By Herija Green
This entry was posted on Tuesday, July 3rd, 2012 at 11:30 am and is filed under Herija Green, Video Game Reviews. You can follow any responses to this entry through the RSS 2.0 feed. Responses are currently closed, but you can trackback from your own site.