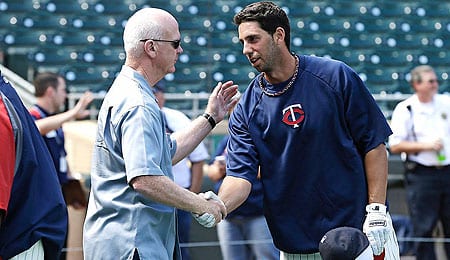 Just over a month ago on a Podcast, we wondered why the Padres were dealing for Ian Kennedy.

Maybe there was some method to their madness after all, as Kennedy has been a much better pitcher since taking his flyball tendencies to Petco Park.

Remember that this dude won 21 games in 2011 for the Diamondbacks before regressing last year and then taking an even bigger nose dive this season.

Now, Kennedy finally seems headed in the right direction, on Monday earning his first win over an NL West opponent in 12 tries this year. In six innings, he held the Giants to five hits and one run, fanning seven. Yes, it’s only the Giants, but Kennedy definitely looks like a different pitcher since arriving on the coast. In four starts at Petco, he’s won three times and in his second start as a Padre he looked splendid in a no decision in Cincy – a very tough park for hurlers.

Maybe it’s time to give Kennedy another look for Fantasy purposes, especially if you need a bit of pitching help to get you over the hump for the final few weeks of the season.

Even through his suckitude in Arizona, he maintained a very strong strikeout rate, and now that his ERA and WHIP are headed in the right direction, Kennedy can again be a very useful Fantasy asset.

Now it’s your turn. Can Ian Kennedy get back to his 2011 form? Let us know in the comments below.

By RotoRob
This entry was posted on Tuesday, September 3rd, 2013 at 10:55 am and is filed under BASEBALL, Fantasy Notes, RotoRob. You can follow any responses to this entry through the RSS 2.0 feed. You can leave a response, or trackback from your own site.