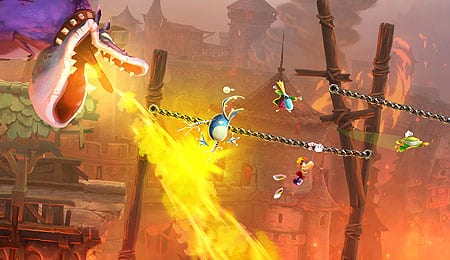 Rayman Origins was one of 2011’s biggest surprises as it revitalized an obscure mascot once thought dead in one of the best 2D games this console generation. It made Mario and Sonic’s recent 2D outings look stale in comparison while not quite achieving the same quality as they did during the SNES and Genesis days. That’s why Rayman Legends is the most fitting title for its successor. While Origins came close, Legends is on par with the games that made Mario and Sonic worldwide icons to begin with.

Rayman Legends controls exactly like Origins. The game is both easy to grasp while designed to take advantage of throwing the player in some very tough scenarios. The physics are also very well implemented as there is just the right amount of time needed between speeding up and slowing down as well as the speed at which Rayman falls.

The game also adds levels in which you use the new character Murfy to remove hazards in your path. In the Wii U and Vita versions this is done using the touch screen to hit enemies, cut ropes, and drag platforms for Rayman’s sidekick Globox to jump on. There are also segments when you have to tilt the controller to tilt the area that Globox is in.

I have said it before and I will say it again: Rayman Origins was the best looking game on both the PlayStation 3 and Xbox 360… at least until Rayman Legends came along and took that crown from its predecessor. While I was initially against the game’s new art style it is actually a change for the better. Like Origins, there is not a single jagged edge or low quality image in this game — everything looks fantastic and fits into the world perfectly.

In motion is when the game really starts to outshine Origins. The game both looks more vibrant and runs smoother. Legends doesn’t merely make this graphic change for an aesthetic switch, either, as there are many sections that take advantage of the 3D models — such as when Rayman flies into the background to continue a level or when bosses unleash flashy attack effects.

Music is both catchy and fun with tunes fitting the level’s aesthetic and pacing extremely well. For instance, water levels will have a slower song playing while the fast-paced ones have a very quick tempo. A special mention goes out to the music levels, which take an existing song, such as “Black Betty,” and translates it flawlessly to the game’s style. Sound effects are wonderfully cheerful and fun. Ultimately, playing Rayman Legends feels like you are playing an awesome slapstick cartoon thanks to the game’s fantastic look and sound.

Rayman Legends is as good as 2D platformers get. The levels are flawlessly designed around its control scheme. A well-placed checkpoint system, combined with the lack of a health meter, allows Rayman Legends to offer a very high challenge without ever feeling unfair. There was not a single instance I encountered when the game felt too easy or frustrating.

Collectibles are designed to keep the levels interesting without throwing too many things to worry about at you. Most levels have 10 Teensies (small, wizard-like creatures) to save and are chock full of Lums to obtain, with four thresholds to reach based on how many you actually get. All the Teensies you liberate are added up to let you unlock new levels while Lums grant things like new characters and access to levels from Rayman Origins.

There is a ridiculous number of these unlockables — to the point that I am still unlocking something new every time I replay a level even after beating the game. That includes lots of stuff from Rayman Origins as the game offers over half of its predecessor’s content. This is not to suggest Legends is a retread by any means, as the game also offers a time trial for every main level you unlock and a wealth of normal levels to play.

The game also offers a wide variety of level types. Some of these involve running through as fast as you can, others are based on taking it slow, finding secrets and being precise. Time trials will test your skills even further as they give you just 40 seconds to save three Teensies tied to fireworks.

My favourites were the music levels. As noted above, these not only take these songs, but they design them so every single pit and enemy is placed to match the beat of it perfectly. It will tell you to jump using a drum beat or place an enemy during a vocal for instance. These levels, though few in number, are an absolute blast to play. The last time I had this much fun with a 2D platformer, I was holding a Sega Genesis controller back when it was relevant.

At first, the previously mentioned Murfy levels felt like a weak point, but over time they completely won me over. As the game goes on they require quicker thinking, which leads to some very challenging and fun gameplay. I would recommend the Vita and Wii U versions above the others for this reason as the other versions have you control the character with Murfy delegated to a button press. The platforming here is more basic than in normal levels, so they would feel like a misstep instead of a nice change of pace.

Even though 2D platformers is my favourite genre, I cannot help but feel overwhelmed by the number that is being released with all except the absolute best coming across as stale to me. It is games like Rayman Legends that remind me why I love them so much. Rayman Legends is not only a game in which I will be unlocking new things for a long time to come, but it will have a special place with Super Mario World and Sonic the Hedgehog 2 as games I’ll be replaying for the rest of my life.

Like Casey, I thought Rayman Origins was an excellent game, so much so that I reviewed it twice (once on the PS3 and again when it launched on the Vita). As great as Origins was, though, it’s fair to say that Rayman Legends tops it in every meaningful way.

The game looks magnificent on the Vita’s OLED screen with eye-popping colours, smart level design and tons of personality jam packed into every aspect of the presentation. It handles great, and the newly implemented Murfy stages are a reminder that, when used properly, the Vita’s unique features can add a lot of personality to a title.

What really stands out about Rayman Legends is just how much fun it is to play, disguising very real challenge behind an endlessly charming exterior of cutesy characters, goofy enemies and a superb soundtrack. If you own a Vita and have an iota of affection toward platformers you owe it to yourself to pick this one up. It’s brilliant.

By Casey Curran
This entry was posted on Monday, September 2nd, 2013 at 12:10 pm and is filed under Casey Curran, Herija Green, Video Game Reviews. You can follow any responses to this entry through the RSS 2.0 feed. Both comments and pings are currently closed.