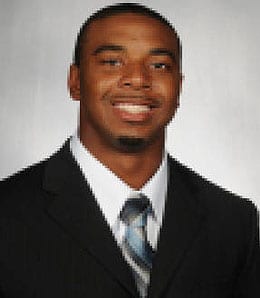 It’s been way too long since we wrote about college football, but with the season kicking off last weekend and some fantastic early stories emerging, it’s really high time to shake off the rust.

For starters, how about Clemson quarterback Tajh Boyd? An early favourite as one of the top quarterbacks for the 2014 NFL draft, he helped guide the Tigers to a huge 38-35 win over fifth-ranked Georgia on Saturday. Boyd not only made an early statement for Heisman glory, but he helped Clemson jump past Georgia to fourth place on the AP Top 25 rankings — the team’s highest showing in a quarter century.

As good as this senior was last year, he’s off to an even better start in 2013 with 270 yards passing and no picks in the opener. Boyd threw for three TDs and rushed for another two. It’ll do. Take a look at the video evidence of all five scores below.

Apparently, however, Clemson offensive coordinator Chad Morris believes Boyd is capable of better, offering the following about his QB’s performance:

“We can play faster. Tajh slowed us down a whole bunch. That was some of our biggest downfalls. He played well, he played like a veteran, like he’s supposed to play. But as far as the tempo, especially in the third and fourth quarter, he was the one slowing us down because he wasn’t getting his eyes to the sidelines quick enough.”

Well, we’ll see if that lights an even bigger fire under Boyd as he looks to do something very special this season.

The Johnny Manziel controversies just won’t go away and he’s now under fire for his perceived slight of Texas A&M Coach Kevin Sumlin. Reports emerged that Manziel, after receiving a personal foul, ignored Sumlin when the coach was yelling at his QB. Sumlin tried to clear that up Tuesday, saying “When he came off the field, basically I made two statements to him, neither one of which should he have responded to.”

Manziel had a brilliant freshman season (becoming the first rookie to win the Heisman) and looks poised to enjoy an even better sophomore effort, but the scrutiny is not going away any time soon.

Speaking of freshmen winning the Heisman, a concept which had its hymen broken last year by Manziel, could it happen again in 2013? Florida State QB Jameis Winston sure made a statement in his debut, playing nearly perfect pigskin to help the Seminoles thrash Pittsburgh something fierce. For his efforts, the redshirt freshman was named the Davey O’Brien Quarterback of the Week.

What do you think? Who’s got the early lead for the Heisman this year? Let us know in the comments below.

By RotoRob
Tags: Clemson Tigers
This entry was posted on Wednesday, September 4th, 2013 at 10:48 am and is filed under College sports, FOOTBALL, On Campus, RotoRob. You can follow any responses to this entry through the RSS 2.0 feed. You can skip to the end and leave a response. Pinging is currently not allowed.