Chris Parmelee Running Out of Time 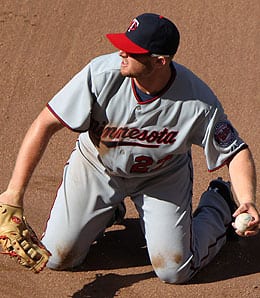 It just seems like Chris Parmelee has spent the whole season on his knees.

When Chris Parmelee was recalled to the Twins in late-August last year, we thought enough of him to give him a Wire Troll nod based on the mashing he had done in Triple-A.

Well, it wasn’t a bad call as Parmelee hit .270 and drove in 14 runs last September.

This year, however, has been a different story.

Spending much of the season batting fifth in the Twins’ order (although more recently lower than that), Parmelee has never struggled more, and he’s finding himself out of the lineup more and more as a result. Next stop, Triple-A?

If you’ve been hanging on to Parmelee in a deep AL-only league, it may be time to seek other options (Adam Lind or Justin Smoak perhaps?). Sure, it was looking like he’d see way more action this year, but now we’re not so sure he’ll stick around long enough to get the at-bats. His counting cats are weak and it took a 1-for-4 performance Monday just for Parmelee to get back to the Mendoza Line.

Parmelee’s minor league pedigree isn’t so hot that his 581 OPS is going to buy him much time – especially with former Indy leaguer Chris Colabello demanding a look in the Show based on his .360 BA through his first 45 games at the Triple-A level. For that matter, minor league veteran Clete Thomas (batting .346 with power and speed at Triple-A) could also replace Parmelee.

Yes, Parmelee was Minny’s first rounder (20th overall) in 2006, so he’ll get the rope that comes with that distinction. We know he has patience, but Thomas could offer patience and speed – a combination we’re never going to see out of Parmelee.

The Twins have some options. Maybe they’re not great options, but Parmelee needs time to nurse his ‘nads. No, really… take a look at the video evidence if you don’t believe me.

We love Jerry Remy stating the obvious at the very end of the video: “That’s got to hurt.” Ouch! Somebody get me a bag of frozen peas. And Natalie Portman to apply it.

By RotoRob
This entry was posted on Tuesday, May 21st, 2013 at 1:19 pm and is filed under BASEBALL, Player profile, RotoRob. You can follow any responses to this entry through the RSS 2.0 feed. You can skip to the end and leave a response. Pinging is currently not allowed.