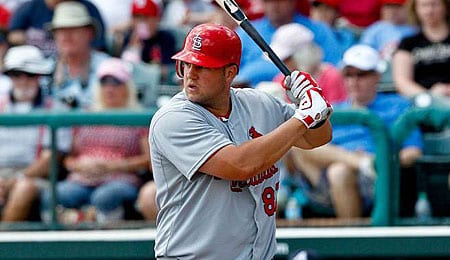 Matt Adams has raked whenever he’s gotten a chance to play.

Now that the All-Star break is in the rear-view mirror we can cancel our plans for a rehab stint for withdrawal. A four-day break is simply too long and it was great to see the boys of summer back in action Friday. Hopefully we used that extra day at the break to formulate our plan of attack for the dog days of summer which are now upon us. Good fortunes to all in the second half!

Matt Adams, 1B, St. Louis Cardinals (CBS: 33 per cent owned, ESPN: 11 per cent): In our last Troll article before the break we mentioned that Adams doesn’t play enough. So much for that situation, as Matt Holliday has found his way to the DL with a hamstring strain, so at-bats will be there for Adams for the short-term, and we know he can produce when he plays (see video below for more evidence). If you’re looking for a power boost, Adams’ seven homers in only 139 at-bats should have your attention.

Henry Urrutia, OF, Baltimore Orioles (CBS: 17 per cent owned, ESPN: unlisted): Talk about no respect — as of Sunday morning, Urrutia still isn’t listed in the player base at ESPN. Nolan Reimold is finished for the season with nerve inflammation in his cervical spine, so the opportunity is at-hand for lanky Cuban Urrutia to move into a full-time role for the duration of the season.

Christian Yelich, OF, Miami Marlins (CBS: 29 per cent owned, ESPN: unowned): Yelich was gaining momentum back in May and unfortunately found his way to the DL with a strained abdominal muscle. He’s now back and tearing the cover off the ball at Double-A Jacksonville, so he should be promoted to Miami in the next 2-to-3 weeks. This kid is the real deal and buying in a bit early is a sure fire-way to save some of that FAAB for the trade deadline moves that are just around the corner.

Rex Brothers, RP, Colorado Rockies (CBS: 27 per cent owned, ESPN: 41 per cent): Those owners that chose to drop Brothers after the return of closer Rafael Betancourt from his first DL stint might be kicking themselves right about now. Betancourt is back on the DL with appendicitis and once more the Rox will be turning to Brothers in the ninth. He’s a must own and start in all formats.

Justin Smoak, 1B, Seattle Mariners (CBS: 33 per cent owned, ESPN: 14 per cent): Smoak is on a tear this month, with three homers, 10 RBI and an outstanding .353 BA in 51 at-bats. He should be active and starting in all formats.

Carlos Torres, RP/SP, New York Mets (CBS: 3 per cent owned, ESPN: 1 per cent): In his first start against the Pirates on July 13 , Torres pitched five solid innings, allowing five hits, no walks, and one earned run while fanning five in a no-decision. He should see a regular turn in the Mets rotation moving forward and is currently worthy of a roster slot in NL-only leagues.

Junior Lake, SS, Chicago Cubs (CBS: 1 per cent owned, ESPN: 1 per cent): A shortstop by trade, Lake is off to a great 4-for-7 start with a stolen base filling in as an outfielder for the Cubbies. David DeJesus is scheduled to return shortly so Lake will have to stay hot to ensure he’s not shipped back to Iowa.

Pedro Strop, RP, Chicago Cubs (CBS: 4 per cent owned, ESPN: 1 per cent): The trade to the Cubs has worked wonders for Strop. In 6 2/3 IP since moving to the NL, he’s allowed two hits, two walks, and no earned runs while whiffing eight. Kevin Gregg is likely to be moved at the trading deadline and Strop’s performance has vaulted him past Blake Parker into the front-runner position for saves should a move be made.

Brandon Workman, SP, Boston Red Sox (CBS: 5 per cent owned, ESPN: unowned): There is no doubt that Allen Webster isn’t ready and the BoSox have now turned to Workman. Workman pitched a very strong game against Oakland just prior to the break and is looking at a potential two-start week for those streaming starters.

Brandon McCarthy, SP, Arizona Diamondbacks (CBS: 22 per cent owned, ESPN: 12 per cent): McCarthy is finally heading out on a rehab assignment this week after being sidelined with shoulder woes since the beginning of June. Arizona and its depleted rotation will need a healthy McCarthy if it is to stay at the top of the NL West leaderboard.

Yonder Alonso, 1B, San Diego Padres (CBS: 45 per cent owned, ESPN: 5 per cent): Alonso is finally back in the lineup after spending six weeks on the DL with a fractured hand. We’re expecting a solid second half, so he should be a decent corner infield option in deeper formats.

Jonathan Villar, SS, Houston Astros (CBS: 1 per cent owned, ESPN: unowned): The ‘Stros shortstop situation is far from being settled, much like most of the positions on the Houston roster. Villar, who has 31 thefts at Triple-A Oklahoma City, is worth stashing on your bench in deeper leagues.

By Tim McLeod
This entry was posted on Sunday, July 21st, 2013 at 3:56 pm and is filed under BASEBALL, The Wire Troll, Tim McLeod. You can follow any responses to this entry through the RSS 2.0 feed. You can leave a response, or trackback from your own site.