Don Mattingly Has the Dodgers Rolling 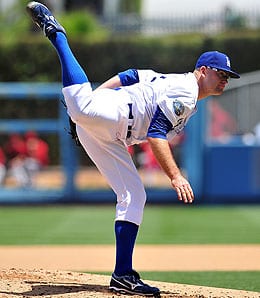 Stephen Fife could add some kick to the Dodgers’ rotation.

It was just a couple of months ago that speculation was rampant that Los Angeles Dodgers Manager Don Mattingly was on thin ice. In fact, in a mid-May Podcast, we predicted he was done like dinner.

Less than a month ago, the Dodgers were 30-42, having sunk to dead last in the NL West, 5.5 games behind the fourth-place Rockies.

Since then, however, this team hasn’t just righted the ship; it’s completely turned this boat right around.

After walking into Washington to win the opener of their three-game series against the Nats 3-2 Friday night, LA has moved above .500 for the first time since it was 7-6 in mid-April. The Dodgers are 18-5 since hitting rock bottom on June 21, and now find themselves in second in the NL West, just a game and a half back of Arizona, which is spinning its wheels of late, and three games up on the third-place Rockies, who are fading after a nice couple of months.

Welcome to the Wild NL West, arguably the most mediocre, yet competitive division with no team better than four games over .500 or worse than 13 games under.

Let’s talk about how the Dodgers have turned things around so quickly.

Now tell us what you think. Leave a comment below and let us know where you think the Dodgers will finish in the NL West this year.

By RotoRob
This entry was posted on Saturday, July 20th, 2013 at 2:21 pm and is filed under BASEBALL, RotoRob, Team report. You can follow any responses to this entry through the RSS 2.0 feed. Both comments and pings are currently closed.