The Wire Troll: Josh Phegley Gets His Shot 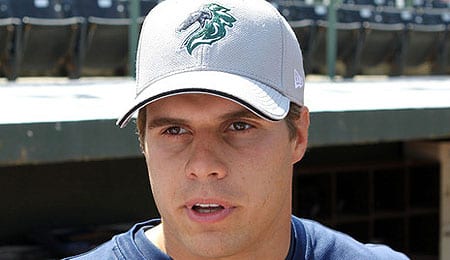 Josh Phegley could be doing most of the catching for the Pale Hose down the stretch.

The All-Star rosters were announced Saturday and, as always, deserving players have been snubbed. This year it appears that someone not only snubbed a few players, but also an entire team.

Josh Donaldson didn’t make the cut and after an incredible first half, but you can rest assured he’ll make the grade on the upcoming RotoRob Mid-Season Wire Troll All-Star Team. To make matters even more embarrassing, Al All-Star Manager Jim Leyland went the relief pitcher route for the last roster spot in the AL and somehow Grant Balfour didn’t make the grade. This is the same Balfour that is a perfect 22-for-22 in saves this season and hasn’t blown a save since April 29, 2012. Someone should really alert the powers that be that Oakland does have an MLB team and maybe, just maybe, some players worthy of attending the All Star festivities this year. Our Aussie friends must be outraged at this turn of events and on the verge of revolt. Remember that, Mr. Leyland, when Mick Dundee comes calling.

Now that our mini-rant is finished, let’s move forward with the Troll options for the coming week.

Josh Phegley, C, Chicago White Sox (CBS: 6 per cent owned, ESPN: unowned): Tyler Flowers has not blossomed, as evidenced by a horrid .205 BA, and the free-falling ChiSox have promoted Phegley as they look more and more towards 2014. In 231 at-bats at Triple-A Charlotte, Phegley has mashed 15 homers with 41 RBI and has a sweet .316 BA. Expect Flowers to ride the pine in the second half as Phegley gets a serious audition.

Tyler Skaggs, SP, Arizona Diamondbacks (CBS: 30 per cent owned, ESPN: 1 per cent): Skaggs got the call to replace the injured and ineffective Trevor Cahill and responded by tossing a gem Friday against the Rockies. The big bender was working as he went eight shutout innings for the W, allowing only three hits and one free pass while chipping in with five strikeouts. The young southpaw, who has shown a propensity to get out of trouble from time to time (see video below) could be in for an extended stay in the D-Backs rotation.

Gordon Beckham, 2B, Chicago White Sox (CBS: 29 percent owned, ESPN: 7 per cent): Since returning from the DL at the beginning of June, Beckham is accomplishing something that very few ChiSox bats have done lately — he’s actually making contact. The power is still a bit lacking, but in deeper leagues Beckham should be rostered and he should be on the radar in standard formats.

Jeremy Hefner, SP, New York Mets (CBS: 36 per cent owned, ESPN: 5 per cent): Hefner has now put together a string of six consecutive quality starts, and in five of those he’s allowed a scant one earned run. He’s also keeping the walks down (just seven in this stretch). Now if the Mets could find some offense, Hefner might have more than just the two wins to show for his efforts. It’s time to give him a serious look in mixed formats.

Ike Davis, 1B, New York Mets (CBS: 38 per cent owned, ESPN: 25 per cent): Davis is back with the Mets after a trip to Vegas and that incredible second half run he had last year is still fresh in our mind.

Alex Rodriguez, 3B, New York Yankees (CBS: 43 per cent owned, ESPN: 12 per cent): Derek Jeter was a waiver wire recommendation last week and now the rehabbing A-Rod. Who would have thunk it?

Darin Ruf, 1B/OF, Philadelphia Phillies (CBS: 6 per cent owned, ESPN: unowned): It keeps getting rougher and rougher in the City of Brotherly Love as Ryan Howard hit the DL for what could be a lengthy stay.

Ricky Nolasco, SP, Los Angeles Dodgers (CBS: 57 per cent owned, ESPN: 6 per cent): The change of scenery plus being backed by a team that actually has an offense that’s not offensive can do nothing but good for Nolasco and his owners.

Matt Adams, 1B, St. Louis Cardinals (CBS: 18 per cent owned, ESPN: 3 per cent): Adams doesn’t play nearly enough, but when he does he makes it count.

Tsuyoshi Wada, SP, Baltimore Orioles (CBS: 1 per cent owned, ESPN: unowned): Wada has tossed four consecutive quality starts at Triple-A Norfolk, so a promotion could be just around the corner.

Jose Tabata, OF, Pittsburgh Pirates (CBS: 3 per cent owned, ESPN: unowned): Is this the last chance for Tabata in Pittsburgh?

Carlos Martinez, SP, St. Louis Cardinals (CBS: 18 per cent owned, ESPN: unowned): Martinez has been totally dominant down on the farm. Joe Kelly has done a credible job, but we’re betting we see Martinez and his off-the-charts stuff very early in the second half.

Marcus Stroman, SP, Toronto Blue Jays (CBS: 2 per cent owned, ESPN: unowned): It’s only a matter of time before Stroman gets his shot in Toronto.

Archie Bradley, SP, Arizona Diamondbacks (CBS: 14 per cent owned, ESPN: unowned): Bradley is another great young pitching prospect that could get the call much sooner than originally anticipated.

By Tim McLeod
Tags: Josh Phegley
This entry was posted on Sunday, July 7th, 2013 at 1:41 pm and is filed under BASEBALL, The Wire Troll, Tim McLeod. You can follow any responses to this entry through the RSS 2.0 feed. Both comments and pings are currently closed.