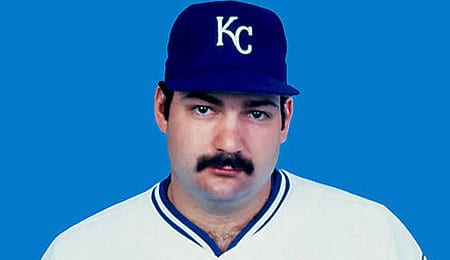 As the Kansas City Royals’ promising first half fades into dust – they are now 5.5 games back of the 2nd place Indians as the AL Central morphs into a two-team race – one thing is certain.

Another year will pass with Steve Balboni as the team’s single-season home run record king, with the modest 36 he bashed in 1985.

After all, the All-Star break has come and gone, and the Royals still don’t have a double-digit home run man this year. That’s right, the current co-leaders are Alex Gordon and Eric Hosmer, each with nine jacks.

A year and a half ago, we speculated about Gordon’s doubles turning into homers and him making a run at Balboni. Um, ya. Gordon hit 14 dingers last year and isn’t exactly bouncing back in a big way this year.

Never mind threatening Balboni, how about producing even a 20-homer dude?

That looks like a serious stretch unless one of those guys or someone else puts up a very big second half.

Billy Butler looked like he was emerging as a legitimate threat to the mark, smacking a career best 29 last year as he was entering his age 27 season. So, how’s that worked out? With just eight long balls, Butler is going to be hard-pressed to even reach 15 this season. Yuck.

So Balboni’s mark – as modest as it is (the next lowest total for a team record is 41 for the Mets) – endures.

Okay, so no one would call Kauffman Stadium a home run hitter’s park, but it’s playing nearly neutral this year and generally is always a mid-pack stadium from a home run output perspective. Yet KC can’t produce even a 30-homer dude.

Wil Myers might have represented the best chance KC had to produce a real threat to Balboni, but he was dealt to Tampa Bay this offseason to address rotation concerns.

Yup, Bye Bye Balboni’s Royal record could stand for quite some time.

For those of you that don’t recall Balboni, here’s a scouting report for him from way back in 1980:

Now it’s your turn to sound off. Is there anyone in the Royals organization currently that could threaten this mark? Let us know in the comments below.

By RotoRob
Tags: Kansas City Royals
This entry was posted on Monday, July 22nd, 2013 at 9:13 am and is filed under BASEBALL, RotoRob, Team report. You can follow any responses to this entry through the RSS 2.0 feed. Both comments and pings are currently closed.