The Wire Troll: The Return of Johnny Giavotella 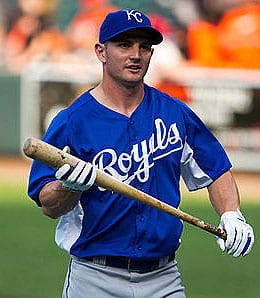 Johnny Giavotella is back. And he brought a bat with him.

The amazing story of Chris Davis continued Saturday as he smacked his 29th and 30th long balls in an 11-3 drubbing of the Yankees. Do you think the Rangers might be going through a little seller’s regret these days when looking at the numbers of Davis and Tommy Hunter (both dealt to B-More in 2011 for Koji Uehara, who was so-so in parts of two seasons with the Rangers before leaving as a free agent)? The O’s will forever be indebted to Nolan Ryan and the Texas Rangers for that sweet deal.

Without further ado let’s get right down to this week’s Troll offerings.

Johnny Giavotella, 2B, Kansas City Royals (CBS: 1 per cent owned, ESPN: unowned): Saturday, the Royals finally DFAed the disappointing Jeff Francoeur and called up Giavotella. We’ve seen Giavotella get short-term opportunities in both 2011 and 2012 (in case you forgot, the video below should remind you who Johnny G. is) and he’s struggled both times, but realistically it’s time for the Royals to give him an extended look. Chris Getz has been dispatched to Triple-A Omaha and Elliot Johnson is not the answer as a full-time player. The opportunity is at-hand for Giavotella to stake claim to a prominent role in the Royals infield.

Kyle Gibson, SP, Minnesota Twins (CBS: 25 per cent owned, ESPN: 6 per cent): Looking at the current Twins starting rotation, Gibson should have no problems maintaining a regular spot. In his MLB debut Saturday, he went six strong innings, allowing eight hits, no walks and two earned runs while chipping in with five punchouts in earning the win. One start in and he could already be the No. 1 starter of this sad sack rotation (that’s right… we really do have a hard time categorizing Kevin Correia as an “ace”).

Brad Miller, SS, Seattle Mariners (CBS: 12 per cent owned, ESPN: 2 per cent): In an effort to inject some offense into a rather moribund attack, the M’s have replaced Brendan Ryan as the starting shortstop with the recently called-up Miller. In 104 at-bats at Triple-A Tacoma, Miller was tearing it up to the tune of six homers, 28 RBI, and an off-the-charts .356 BA. The Mariners are clearly planning for the future with their recent moves and Miller will be a part of that future.

Gregor Blanco, OF, San Francisco Giants (CBS: 24 per cent owned, ESPN: 37 per cent): Angel Pagan (torn hamstring) is likely lost for the balance of the season, thrusting Blanco into not only the starting centerfield role but also as the main leadoff dude. Blanco brings both stolen base and runs scored potential to the table and with full-time at-bats he’ll be an asset in all formats as a fifth outfielder.

Blake Parker, RP, Chicago Cubs (CBS/ESPN: unowned): Someone has to close after Kevin Gregg is traded and we’re betting that Parker gets the first shot.

Dustin Ackley, 2B, Seattle Mariners (CBS: 25 per cent owned, ESPN: 3 per cent): Meet your newest addition to the M’s outfield. Ackley is dealing with a thumb injury day-to-day, but he should be back by mid-week.

Taylor Jordan, SP, Washington Nationals (CBS: 23 per cent owned, ESPN: 1 per cent): The 24-year-old righty had a somewhat shaky debut Saturday, but he’s guaranteed several more starts while Dan Haren deals with shoulder inflammation. At Double-A Harrisburg, Jordan sported a 7-0 record with an ERA and WHIP both under 1.00.

Wei-Yin Chen, SP, Baltimore Orioles (CBS: 51 per cent owned, ESPN: 4 per cent): After a six-week stint on the DL with an oblique strain, Chen is scheduled to rejoin the O’s rotation this week.

Jacob Turner, SP, Miami Marlins (CBS: 33 per cent owned, ESPN: 13 per cent): Turner has six consecutive quality starts since getting the call at the end of May. Run, don’t walk, to your waiver wire if he’s available.

Matt Dominguez, 3B, Houston Astros (CBS: 43 per cent owned, ESPN: 9 per cent): Apparently, being in the top 10 in both homers and RBI at your position doesn’t generate much respect these days.

Eric Chavez, 3B, Arizona Diamondbacks (CBS: 17 per cent owned, ESPN: 7 per cent): Chavez had seven homers and 25 RBI in 119 at-bats before being sidelined for a month with a strained oblique.

Tyler Chatwood, SP, Colorado Rockies (CBS: 33 per cent owned, ESPN: 15 per cent): Chatwood has eight straight quality starts going back to April 29. Why is he available in so many leagues?

Josh Satin, 1B, New York Mets (CBS: 1 per cent owned, ESPN: unowned): Satin is a temporary fix in NL-only leagues until the return of Ike Davis.

Shaun Marcum, SP, New York Mets (CBS: 26 per cent owned, ESPN: 1 per cent): Marcum tossed eight scoreless innings against the ChiSox Wednesday. As RotoRob suggested a couple of weeks ago, there is reason for optimism.

Crave more in-depth Fantasy analysis? Then join us every Thursday at 9 p.m. EST for RotoRob’s Fantasy Baseball Weekly Podcast on Blogtalkradio. Tim McLeod and RotoRob will entertain and edify you for a half hour or more each week. After missing last week (June 27), we’ll be back this week (July 4). Tune in here.

By Tim McLeod
This entry was posted on Sunday, June 30th, 2013 at 11:56 am and is filed under BASEBALL, The Wire Troll, Tim McLeod. You can follow any responses to this entry through the RSS 2.0 feed. Both comments and pings are currently closed.