Could Shaun Marcum’s Job Be in Jeopardy? 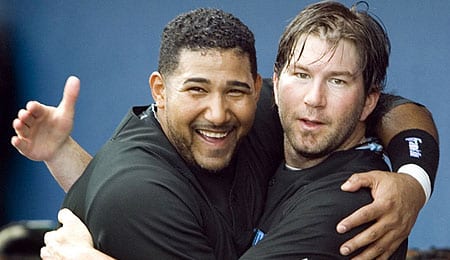 Winless Shaun Marcum (right) could use a hug right about now.

On Thursday we wrote about how either Dillon Gee or Jeremy Hefner could lose their rotation spot for the New York Mets once top prospect Zack Wheeler is recalled next week.

Well, perhaps we should have included Shaun Marcum in that list of pitchers that were facing the heat in New York.

Hefner, of course, only got his shot because Marcum was hurt early in the season, but since Marcum has returned in late-April, it’s been a serious struggle for the most part.

The Mets say that when Wheeler gets here, they’re going to go with the Fantasy value draining six-man staff a couple of times through the rotation. But come on. Let’s get real… that can’t last.

With Gee and Hefner both pitching better lately, Marcum could be the one at risk – despite his relatively high salary.

Marcum has been seriously inconsistent with his performance, yet has been consistently losing. And by consistently, we mean constantly. Hell, last Saturday he tossed eight innings of relief (see video below) in that crazy 20-inning marathon against the Fish and he was actually fantastic. Yet he lost.

Marcum followed that up Friday with an ugly outing against the Cubs to suffer another loss and fall to 0-8 on the season. The Mets gave him an extra day of rest before this start, but it sure didn’t help as the Cubbies simply battered him.

Believe it or not, Marcum has actually been improving as the season has progressed, so for our money, he should be given the chance to stay in the rotation and right himself. But in looking at the bigger picture, staying healthy has become an issue for the veteran, and after back-to-back 13-win seasons, he’s only totalled seven victories since the start of the 2012 season. Yuck.

With an 0-8 record, Marcum is in rare company this season. Only Houston’s Philip Humber is also winless with as many losses as that. In fairness, Marcum hasn’t exactly been blessed with great run support. For instance, in half of his losses, he allowed just three runs or less, which should be good enough to bag a win or three, shouldn’t it?

The way things are going, Marcum could soon be carving his name in the Mets’ record book in a rather notorious fashion. The record for consecutive losses at the beginning of a Mets’ career is 12, held by Bob Miller in 1962. and let’s not forget Anthony Young’s epic 0-13 start to the 1993 season for the Mets.

Hey, it’s something for Marcum to shoot for as he tries to justify the contract the Mets gave him.

For Fantasy purposes, before you throw Marcum back onto the scrap head after Friday’s stinker, consider this: His FIP is 3.06 – nearly two and a half runs lower than his actual ERA. Marcum’s .329 BABIP and 57.2 per cent strand rate both paint a picture of an extremely unlucky pitcher. We suggest you hold for now and see how this plays out because if he can survive the rotation cut, Marcum has a chance to be a rather useful asset in the second half.

Now tell us what you think in the comments below. Which Met starter will get the hook from the rotation after Wheeler arrives?

By RotoRob
This entry was posted on Saturday, June 15th, 2013 at 12:05 pm and is filed under BASEBALL, Player profile, RotoRob. You can follow any responses to this entry through the RSS 2.0 feed. Both comments and pings are currently closed.