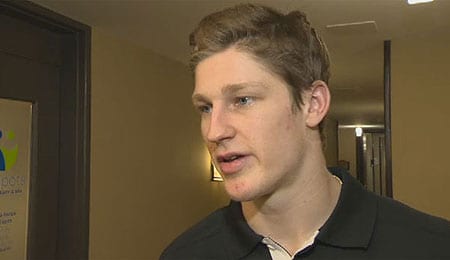 The selection of Nathan MacKinnon first overall was somewhat surprising.

Well, so much for the top selection in the 2013 NHL Draft being a defenseman, huh? On Sunday, the first three players off the board were all forwards. But while there obviously wasn’t a clear cut No. 1 pick, this draft had lots of talent – especially at centre.

Let’s review the first round selections, shall we?

1. Colorado Avalanche – Nathan MacKinnon, C, Halifax (QMJHL): MacKinnon is plenty ready for the NHL. In fact, he’s already assured of a roster spot and is expected to centre the Avs’ third line between Steve Downie and Jamie McGinn. MacKinnon is a splendid prospect who has all the tools necessary to succeed. Expect him to be a Fantasy asset from Day One. To see what MacKinnon is capable of, check out the video below (mind the French graphics, but the skill he shows requires no translating).

2. Florida Panthers – Aleksander Barkov, C, Tappara (Finland): Barkov is a big (6’2″, 209) middleman who is comfortable both on the power play and killing penalties and is also a fine faceoff man. This is one of the top prospects Finland has ever produced, and as long as his shoulder is okay, he has a good chance of playing in Florida in the coming season.

3. Tampa Bay Lightning – Jonathan Drouin, LW, Halifax (QMJHL): How good were the Mooseheads last season to have two of the top three picks? Well, good enough to win the Memorial Cup. Drouin stressed that he was hoping to land in Tampa; the Lightning hopes he can live up to his billing as the next Patrick Kane.

4. Nashville Predators – Seth Jones, D, Portland (WHL): Originally expected to go No. 1 overall, former NBAer Popeye Jones’ kid slipped to fourth, but still became the first black player to ever be picked in the top five. He’s one of the top defensive prospects in some time and will combine with Shea Weber to give the Preds a defensive nucleus that’s the envy of every team in the league.

5. Carolina Hurricanes – Elias Lindholm, C, Brynas (Sweden): Many thought the ‘Canes would pick Valeri Nichushkin if they wanted an offensive centre, or Darnell Nurse if they wanted a blueliner, but instead they opted for Swedish pivot Lindholm. Carolina probably tried to trade down, but when that fell through, it went with Lindholm, who will return to Sweden if he doesn’t make the team out of camp. He’s considered a very complete, well-rounded player.

6. Calgary Flames – Sean Monahan, C, Ottawa (OHL): Monahan can score (31 goals last season), but he struggled with his defensive play, despite his reputation as a solid two-way player. However, he’s got the smarts to adjust and considering he went +25 in 2011-12, we know he’s capable.

7. Edmonton Oilers – Darnell Nurse, D, Sault Ste. Marie (OHL): Edmonton also toyed with dealing this pick, but in the end used it for itself, picking the 6’4″ athletic Nurse (doesn’t that sound like some kind of fantasy in a Swedish movie?). He was considered the fourth best North American skater heading into the draft, but slightly slipped, winding up the fifth player off the board from this continent.

8. Buffalo Sabres – Rasmus Ristolainen, D, TPS (Finland): The rebuilding Sabres decided that adding a blueliner was the way to go – a smart move considering they still haven’t fully committed to parting with either their top goalie or forward, as has been rumoured. Ristolainen was the third European skater off the board and originally ranked as the fourth best available.

9. Vancouver Canucks – Bo Horvat, C, London (OHL): Unable to deal overpriced Roberto Luongo, the Canucks traded Cory Schneider to New Jersey to land this pick that they used to grab Horvat. Don’t expect Horvat to help this year, but he will develop quickly as some believe he was the most complete player in the draft.

10. Dallas Stars – Valeri Nichushkin, RW, Chelyabinsk (KHL): This kid is big (6’4″, 202) and oozing with talent, but he slipped to the 10th pick because of concerns about whether he’d stick in the KHL in Russia for another two years. Apparently, that’s not the case as Nichushkin has said he’s leaving. However, if Dallas tries to start him in the AHL, he could opt to bolt right back to Russia. So this is a high risk/high reward pick for the Stars, who must tread very carefully if they want to keep this potential star happy.

By RotoRob
This entry was posted on Monday, July 1st, 2013 at 12:59 pm and is filed under Draft report, HOCKEY, RotoRob. You can follow any responses to this entry through the RSS 2.0 feed. You can skip to the end and leave a response. Pinging is currently not allowed.