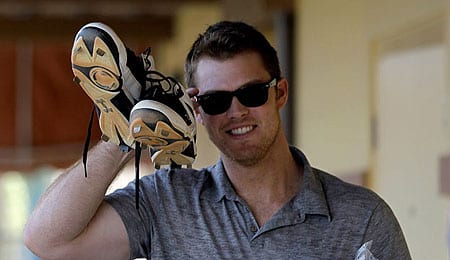 Brennan Boesch may not be suiting up for the Yanks much more.

On Sunday, Brennan Boesch spanked his second homer in his last eight games, but playing time has been at a premium for him, so we simply can’t recommend him in any format — especially with Curtis Granderson nearing a return. We slotted Boesch 94th in our Outfield Rankings, but given that he has a mere 30 at-bats so far, he hasn’t even lived up to those modest expectations. After the Tigers unceremoniously ditched him, he was a nice late spring acquisition to help the Yankees fill one of their holes, but his usefulness — limited as it is — is about to expire with Granderson due back in a couple of weeks.

By RotoRob
This entry was posted on Monday, April 29th, 2013 at 3:37 pm and is filed under BASEBALL, MLB Today, RotoRob. You can follow any responses to this entry through the RSS 2.0 feed. You can skip to the end and leave a response. Pinging is currently not allowed.