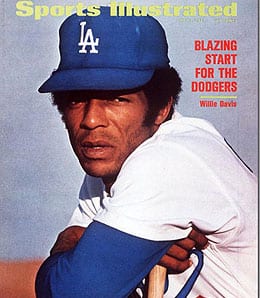 You’re going to be hearing a lot about Willie Davis in the coming days.

We’ve been mum on Andre Ethier’s impressive hitting streak, so after he was scratched from Wednesday’s lineup because of an elbow inflammation, we thought we’d tip our hat to what he’s accomplished.

The streak now sits at 29 games, and because he didn’t enter Wednesday’s game, it remains intact, although it’s worth noting that he was willing to pinch hit in the game – something that would have seriously jeopardized the run.

Ethier is just past the halfway point to Joe DiMaggio’s record 56-game run and he sits just two games shy of the Dodger record, Willie Davis’ 31-game streak set in 1969.

Heading into the season, we ranked Ethier just outside of the top 15 outfielders and we’ve been bang on with that prediction so far.

The Dodgers are off Thursday, giving Ethier’s elbow a chance to heal up before the team heads to New York for a weekend series against the Mets. The streak has now started to garner major national attention, meaning the second half is going to be way harder to accomplish.

Let’s look forward to the next few pitchers Ethier is scheduled to face as we try to determine how long his run will last.

On Friday, the Mets will send lefty Jonathon Niese to the mound, a pitcher Ethier has never faced. Niese isn’t exactly tough on lefties (.275 BAA), however, Ethier doesn’t exactly fare well against southpaws (.229 BA). It’s pretty amazing he’s hit in 29 straight games despite having such little success against left-handed pitching.

Saturday’s starter for the Mets is righty Chris Young, who looked almost unhittable in his last start. Ethier has plenty of experience against Young from the hurler’s days with division rival San Diego, and he’s generally owned the lanky righty, going 12-for-29 (.404 BA) is his career. It’s safe to say that if Ethier hits 30 on Friday, he’ll reach 31 on Saturday.

That brings us to Sunday, when the Mets will start right-handed knuckleballer R.A. Dickey, a pitcher Ethier has only had two at-bats against, one of which resulted in a double. It’s too small a sample size to draw a conclusion, so all bets are off here, especially with a knuckleballer tossing. After his surprisingly good 2010, Dickey has been extremely inconsistent in the early going this season.

The Dodgers then travel to Pittsburgh for a four-game set starting on Monday. The Pirates’ starting pitcher in the series opener will be Jeff Karstens, a hurler Ethier has fared well against (3-for-8 with a homer and four RBI). Next up will be Kevin Correia, another former division rival and a pitcher that’s been shockingly good so far for the Buccos. Ethier has abused Correia over the years, spanking him to the tune of a .529 BA (9-for-17 with two doubles, a triple and four walks). It’s safe to say that if the streak is still alive come Tuesday, it has a very good chance of reaching 34 games in this one, notwithstanding Correia’s fine start.

On Wednesday, Paul Maholm will toe the rubber for Pittsburgh, and Ethier has also done well against him (2-for-6 with an RBI and a walk). Thursday’s starter for the Pirates is still unknown, but this is usually Charlie Morton’s turn in the rotation, another Bucco hurler that’s done better than expected so far. Ethier has had one hit (a homer) in three at-bats vs. Morton.

If Ethier can survive these two series, he’ll have a 35-game streak as the Dodgers head back to Los Angeles to begin a seven-game homestand against the Diamondbacks on May 13.

By RotoRob
This entry was posted on Thursday, May 5th, 2011 at 12:56 pm and is filed under BASEBALL, Fantasy Notes, RotoRob. You can follow any responses to this entry through the RSS 2.0 feed. You can leave a response, or trackback from your own site.