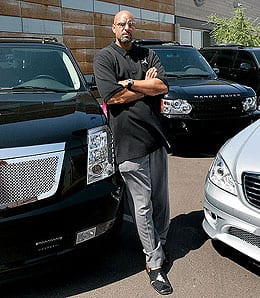 Tony Clark knew how to drive ’em in.

Now that Chipper Jones has retired, we can close the book on the 1990 MLB Draft.

So let’s take a look at the top 15 picks from this draft class and assess how well each selection did in terms of return on investment. We’ll base this on their career WAR mark and the signing bonus they received.

Summary: One of the best switch hitters to ever play the game, Jones hit over .300 in his career from both sides of the plate. The Braves could have given him a $25 million bonus and still made out like bandits.

Bang for Buck: $40,000 for every win above replacement

Summary: Another switch hitter, Tony the Tiger couldn’t compare to Jones in terms of bang for the buck, but he enjoyed a solid career and was especially productive between 1997 and 1999 when he combined for nearly 100 homers and 319 RBI.

Career Highlights: Hit .274 with 150 homers and 610 RBI in 14-year career (almost all with the Phillies except his final season, which was with the Dodgers); two-time All-Star; 1999 Gold Glove winner; 2002 NL Comeback Player of the Year; in 1999, he probably had the best offensive season ever by a Phillie catcher; his 1,139 games caught for Phillies is the most in team history.

Summary: That’s a pretty damn good ratio of WAR to signing bonus for Lieberthal, who paid the Phillies back by mashing more dingers than any catcher in team history.

Career Highlights: Won 107 games with 3.74 ERA in 11 seasons, most of which were with the White Sox; just missed a no-hitter in 1997; inducted into the Hispanic Heritage Baseball Museum Hall of Fame in 2008.

Summary: An injury in the 1997 postseason ultimately led this former college star to retire in 2001. His bang for buck wasn’t quite as good as Lieberthal’s but was pretty good nonetheless, and surely would have been better if not for his injuries.

Career Highlights: Played five seasons in bigs (three with Marlins) and another two in Japan; 55 career strikeouts; traded by Pirates to Rangers with another pitching prospect for third baseman Steve Buechele.

Summary: With just 44 career appearances for the fifth overall pick (and none with the team that drafted him), Miller represented the first bust in this draft. (Hey, at least Buechele played 111 games with the Pirates before moving onto the Cubs.)

Career Highlights: Spent six seasons in bigs, three with Seattle; part of the package traded by San Diego to Milwaukee for Greg Vaughn in 1996; had lifetime .249 BA and .375 SLG in 355 games and 1,051 plate appearances.

Summary: Newfield struggled to an even worse career WAR (and yes, it’s pretty sad when your career highlight is being a throw-in in a deal for a semistar).

Summary: This was a great year for picking catchers high as Wilson was pretty decent with the stick, and phenomenal defensively (he has the highest fielding percentage ever among American League catchers).

Career Highlights: Hit .224 with 14 RBI in his two-season career with the Reds and wound up spending nine seasons in the minors.

Summary: Costo was drafted as a shortstop, but mostly played first base in his brief time in the majors and never played a big league game with the Indians. Yuck.

Bang for Buck: None

Summary: The Dodgers went through a dark period when they used several high draft picks on pitchers that flamed out with arm trouble. Walden is near the top of that list, plucked out of an Oklahoma high school at the age of 17 to fill a need for left-handed pitching. Oops. This was the highest pick of the 1990 draft which never made it to the majors.

Career Highlights: Hit .271 with over 200 homers in 1,405 games in a 14-year career (never spending more than three seasons with any one team); made two All-Star teams; was part of the 2005 World Series champion White Sox.

Summary: Another switch-hitter, Everett spent another four seasons playing Indy ball after his last MLB campaign. He provided a pretty good return on investment, although the Yanks never enjoyed any of it as he was taken in the 1992 expansion draft by the Marlins. Everett could have had a much better career if his douchiness wasn’t constantly getting him into hot water — hence him ending his career playing Independent ball for several years.

Career Highlights: Hit .220 with 86 homers in 569 games over seven-year career, mostly with the Expos.

Summary: Andrews looked like a top prospect when he mashed 25 homers and drew 107 walks in the Sally League in 1992, but really only had two nice seasons in the bigs and spent the rest of the time as a part-time player. He never hit more than .238 but did pound 25 homers in 1998.

Summary: Ritchie pitched in just 57 games for the Twins over two seasons before being released, so they certainly didn’t get much value out of him, but he definitely redeemed himself during his time in the Steel City.

Career Highlights: Went 49-46 in nine-year career, spent mostly as a starter and mostly with the Cards; was fifth in ROY voting in 1992; was the Cards’ Opening Day starter in 1993.

Summary: Osborne’s career value and initial investment payoff were very, very similar to Ritchie’s. Had injuries not affected him as much as they did (just one season with 30 starts), he could have enjoyed a much better career.

Career Highlights: He had 40 wins and 711 strikeouts in 907 IP in an 11-year career (five of which were with the A’s); shifted to the bullpen almost exclusively after 1994, he earned four saves in his 261 career relief outings.

Summary: Van Poppel was rushed to the majors because of the major league deal he was given, limiting the A’s minor league options on him — and it cost both him and the team as he never came close to achieving his massive potential. The A’s used the 1990 draft to rebuild the rotation (taking four starters in the first 36 picks) and they were all flops. Van Poppel was a major bust, but considering the Braves contemplated taking him first overall, it wasn’t as monumentally bad as it could have been.

Summary: Hyzdu never wound up playing in the bigs with the Giants and while his ROI wasn’t great, it looked much better when considering Van Poppel was taken with the pick ahead of him.

By RotoRob
This entry was posted on Tuesday, April 30th, 2013 at 6:34 pm and is filed under BASEBALL, Draft report, RotoRob. You can follow any responses to this entry through the RSS 2.0 feed. Both comments and pings are currently closed.