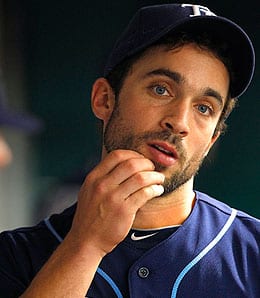 Over the past few years, the Tampa Bay Rays have always been able to overcome the losses of key players and continue to contend (and often win) in the tough AL East. Five straight winning seasons, including three playoff appearances and an AL Championship attest to that.

But now, something is amiss.

Yes, it’s very early, but a four-game losing streak has seen the Rays drop to dead last in the AL East with a 4-9 mark, a game and a half back of the fourth place Jays and already five games off the pace of the surprisingly first place Boston Red Sox.

Well, shock of shocks, the Rays aren’t hitting. We all know about their great rotation and deep bullpen, but you still need to be able to score some runs — especially in the American League.

Only the Miami Marlins (who no one will confuse with a real big league team) have scored fewer runs than Tampa Bay. The Rays’ composite .204 batting average is the worst in all of baseball.

The really awful part is this hitting slump is getting worse in the past week as the Rays have gone into a 1-7 tailspin.

Over this stretch, Tampa Bay has mustered a mere 14 runs thanks to a whopping .160 BA. Key hits? Sure, whatever. The Rays are 1-for-34 with runners in scoring position over the last eight games. Holy crapazoid, Batman.

Let’s take a look at some of the major culprits behind this skid.

Two weeks ago, outfielder Sam Fuld recorded a two-hit game; those are his only base knocks in 25 at-bats, and with just one walk, it’s not as if he’s an on-base machine. We slotted him 134th in our Outfield Rankings, but he’s barely been a top 160 player at the position so far.

Yunel Escobar, 21st in our Shortstop Rankings has probably been no better than a top 65 shortstop so far. He took yet another 0-for-4 Tuesday, leaving him with one hit in his last 27 at-bats. Yuck. Fantasy owners have been dumping this stiff in all but the deepest AL-only leagues, and with good reason. He’s 4-for-45 (.089) for the season with nearly no extra-base pop. To add insult to injury, Escobar has been caught stealing on his only attempt. So much for him ending the Rays’ issues at shortstop. Oh, did we mention that Escobar is a douchebag?

How about first baseman James Loney? We all know that first base is for the sluggers in our game, right? Uh, yeah… about that. We slotted Loney 47th in our First Base Rankings, but he hasn’t even lived up to those extremely modest expectations. He’s now gone eight days without a hit and has been losing PT to Shelley Duncan and Ryan Roberts. Loney hasn’t been playing at all against lefties (small wonder after “slugging” .261 against them last year), and it’s become clear he’s slowly morphing into a part-time player, which is going to limit his value to extremely deep AL-only formats. This contact hitter’s .217 BABIP has to improve, doesn’t it?

How about Matt Joyce? A top 90 outfielder heading into the season, he’s barely been among the top 130 at the position so far. He’s shown signs of life with three hits in the past two games, but was slumping horribly and had missed some time last week with a neck woe. Joyce’s extra-base power just keeps dipping and after swiping 13 bags in 2011, he’s 4-for-8 since. Remember his .360 OBP in 2010? It’s at .225 this season. The fact that he can’t hit lefties is no big shock, but don’t expect to see him in the lineup against southpaws much, anyway, But man, what happened to his stroke against righties? Consider Joyce a bit of a buy-low opportunity.

And then there’s newcomer Kelly Johnson, who we slotted 16th in our Second Base Rankings. We’ve been pretty much bang on there, as he’s been a solid on-base dude. The base hits aren’t exactly coming hot and heavy, though. On Tuesday, Johnson smoked a dinger, but he still does not have a multi-hit game this season. And hey, at least he busted up Clay Buchholz’s no-hitter on Sunday. But Johnson is not seeing tons of PT and it’s affecting his counting cats. His two homers are his only extra-base knocks and he’s batting all of .200. Johnson is seeing time all over the field (three games at second, three in the outfield and one at first), so perhaps he’ll be useful as a super sub with power.

While the above mentioned are the most guilty, it’s not as if other Rays are beyond reproach: Duncan has exactly one extra-base hit in 11 games; Roberts has yet to score a run through nine games; Desmond Jennings has shown modest growth, but his .240 BA isn’t exactly exciting us; Jose Molina has just one extra-base hit through 11 games and 20 at-bats; and Evan Longoria’s extra-base power has been rather sparse.

This team desperately needs to clone Ben Zobrist and play him in all three outfield slots and at every infield position. And then see if he can catch, while they’re at it. Truthfully, it’s simply been Zobrist, Longoria and Jennings to drive this attack so far. That’s not enough.

It’s just about time to call for reinforcements. Shortstop Hak-Ju Lee, while raw, is dominating in his first taste of Triple-A. DH Leslie Anderson has nothing left to learn at Triple-A and is ready for his big league debut. Veteran OF Jason Bourgeois, who was pretty good for the Astros in 2011, is tearing it up at Triple-A and ready for another chance in the bigs. And at what point will top prospect Wil Myers come to the Show?

By RotoRob
Tags: Boston Red Sox, Miami Marlins, Tampa Bay Rays, Toronto Blue Jays
This entry was posted on Wednesday, April 17th, 2013 at 3:38 pm and is filed under BASEBALL, RotoRob, Team report. You can follow any responses to this entry through the RSS 2.0 feed. Both comments and pings are currently closed.