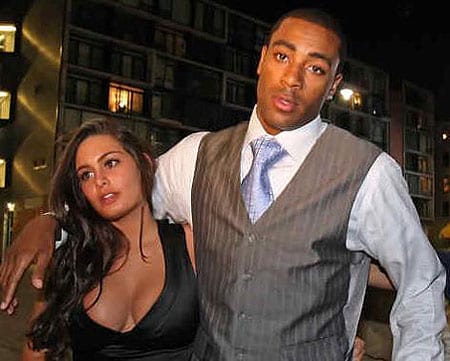 Wayne Ellington (right) has been Fantasy irrelevant for years, but somehow we don’t feel sorry for him.

This weekend is a glorious opportunity to get a jump on the hot waiver wire pickups in your league. While your opponents are embroiled in March Madness, take a quick break and see if any of our picks are available in your league. Pounce now while your league mates are distracted.

The Heat looked toast in Cleveland but surged back to keep the streak alive; Derrick Rose says only the good lord knows when he’ll be back (uh-oh); and both Pau Gasol and Kobe Bryant returned, but it wasn’t enough as the Lakers blew a lead against the Wizards.

Wayne Ellington, SG, Cleveland Cavaliers: It’s hard to believe it’s been two and a half years since Ellington last caught our eye as a potential Fantasy asset. But with star rookie Dion Waiters out for at least a week with a knee injury (and possibly facing surgery), Ellington has been thrust into the starting two-guard role. In his first start Wednesday, Ellington went off for 20 points, seven boards, four assists, three treys and a steal before cooling off Friday with 13 points. Cleveland’s lack of depth has given him an opportunity to rack up some points and lots of three-pointers down the stretch, so give him a look.

Damien Wilkins, SG, Philadelphia 76ers: Seriously? Wilkins has been buried just as long as Ellington. How ironic that these former T-Wolve backups both suddenly re-emerge with value. Wilkins went off Thursday for a team-high 24 points with four steals and a couple of treys and now heads into a sweet four-game week that includes games against defensive sieves Cleveland and Charlotte. Give the vet a look.

Jerryd Bayless, PG/SG, Memphis Grizzlies: Bayless played the hero Wednesday with a game-tying bucket to force OT — part of a 10-point fourth quarter and 20-point night for the combo guard.

Mario Chalmers, PG, Miami Heat: Maybe he doesn’t fill it up like his superstar teammates, but no other NBA guard that has played at least 30 games and averaged at least 24 MPG this season has a higher net rating.

Reggie Evans, PF, Brooklyn Nets: Back in January, we gave Evans a nod for those of you seeking boards. Well, he’s crashing the glass like a madman again, pulling down 22 boards in two of the past three games (55 total over this stretch). On Wednesday, Evans had eight rebounds in the second quarter alone — the same as the entire Mavericks’ team. Yikes. He’s not going to score much and his presence can create match-up issues for the Nets against quicker fours, but man, does Evans ever own the window.

Tyler Hansbrough, PF, Indiana Pacers: It was just over a year ago that we last gave Hansbrough some love. Starting for David West (knee), on Tuesday, Psycho-T shook off an elbow to the gut to record a big double-double as the Pacers snapped a mini skid. Friday, he did it again with his fifth double-double of the season, pouring in 22 points with 12 boards to lead the Pacers to a third straight win. Sure, some peripheral numbers would be nice, but who can argue with 20-10? While West is sidelined, Hansbrough looks like a sweet play.

Corey Brewer, SF, Denver Nuggets: Brewer was clutch with three FTs in the dying seconds as part of a 29-point game night Thursday as the Nuggets earned their 14th straight win.

Caron Butler, SF, Los Angeles Clippers: Butler has been shooting better of late, leading to a 14 PPG average over the past four games.

Jonas Valanciunas, Toronto Raptors: The Raptors’ rookie big man is starting to see more PT and he’s rewarding his owners, sparse that they are. Yes, Valanciunas has had trouble staying healthy this season, but man is he peaking at the right time. On Friday, he hit double figures for the fourth straight game, continued his hot shooting (5-for-6) and has remained a nice source of boards (seven straight games with at least six rebounds). Best of all, the 20-year-old has already exhibited leadership qualities that should ensure increased PT down the stretch. We love this kid’s future.

DeAndre Jordan, Los Angeles Clippers: When we slotted Jordan inside the top 25 in our Centre Rankings heading into the season, we talked about his improved FT shooting. The monster dunker has backslid badly in his work from the charity stripe and he has not lived up to that billing this year, likely only playing at a top 45 level. You have to love Jordan’s shooting of late (86.4 per cent over the past five games), and he’s really limiting his turnovers, making him worth a look if you need big man help (and who doesn’t?). True, Jordan has seen less PT this season, but he’s getting more touches than ever and don’t forget he still has the benefit of receiving lobs from CP3.

Byron Mullens, PF/C, Charlotte Bobcats: Mullens had barely been playing lately, but he’s back in the good books over the past two games, pouring in 25 points Wednesday.

Andray Blatche, PF/C, Brooklyn Nets: Blatche seems to have connected with Brook Lopez, and that should earn him more PT going forward.

By RotoRob
This entry was posted on Saturday, March 23rd, 2013 at 12:43 pm and is filed under BASKETBALL, RotoRob, The Wire Troll. You can follow any responses to this entry through the RSS 2.0 feed. Both comments and pings are currently closed.