The Wire Troll: Tyler Hansbrough Getting Hot off the Bench 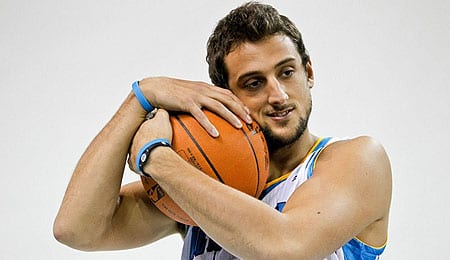 When Marco Belinelli treats his balls well, the buckets follow.

Welcome back to another week of Fantasy basketball waiver wire recommendations in The Wire Troll. The time grows short with Fantasy playoffs beginning in just two weeks after this one wraps Sunday, so if you have ground to make up, it’s more important than ever to scour the wire.

Kyrie Irving, who missed Friday’s game with the flu, could be out again Saturday, so daily league owners should be ready to make a lineup adjustment. Meanwhile, Kobe Bryant – battling a concussion earlier in the week and dealing with neck and nose woes – barely missed going off for 40 on Friday. Clearly, it takes a lot more to bring Black Mamba down. LeBron James, meanwhile, continues to put up historic performances seemingly nightly.

Marco Belinelli, SG, New Orleans Hornets: We recommended Belinelli a few weeks ago, and now he’s ready for another look as he’s been playing more minutes, putting up some decent point totals and even pitching in off the boards for a change. He hasn’t exactly been lights out with his shooting touch in the past couple of games, but with an average of 13 FGA over the past two, he’s getting enough looks to do some damage (17 PPG after the Italian guard scored 14 Friday to help the Hornets to a rare win). Better yet, Belinelli hasn’t been merely settling for three point shots, and has gone to the line six times in each of the past two games – sinking 11 of his 12 attempts. With double digit scoring in 11 of his last 12 games, Belinelli is offering as close to consistent Fantasy value as we’ve seen from him, so ride the hot streak while you can.

Daequan Cook, SG/SF, Oklahoma City Thunder: With Thabo Sefolosha out, Cook hasn’t exactly grabbed the starting SG job in OKC and run with it. Of course, much like Thabo did, Cook is taking a backseat to reserve James Harden. Still, Cook is worth a look in deeper formats. The former Heat reserve is still a threat from downtown, averaging 1.5 treys per game this season. Yes, Cook is currently a starter in name only, but if you’re in a league of 16 or more teams and need 3-pointers, he’s well worth a look.

Rodrigue Beaubois, PG/SG, Dallas Mavericks: In his first start in a month, the Frenchman went off for 25 points and four steals on Friday. Grab this talented youngster, pronto!

Derrick Williams, SF/PF, Minnesota Timberwolves: Williams has been a typical rookie this season — teasing owners from time to time, but ultimately proving to be a frustrating player to own. We took a flier on him at the draft in our expert league, but had to cut bait pretty early. The thing is, we actually expected Williams to be a top 30 SF this season, and while he’s mostly toiled as a four, he hasn’t been anywhere near that good among PFs. However, the youngster has been making some noise this week and it may be time to take another flier on Williams. On Tuesday, he went off for a career-best 27 points (including four treys) with five boards and a block and then followed that up the next night with a third straight double-digit scoring game while adding seven boards, two three-pointers and an assist. Unfortunately, Williams struggled Friday (2-for-10 from the field, although he did have three steals and a block), but the slam dunk competitor has shown enough to earn a bit more PT going forward, and that’ll be the big difference as he carves out some Fantasy value in the second half.

Grant Hill, SF/PF, Phoenix Suns: About six weeks ago, we gave Hill some love and given his recent performance – and the fact that he remains widely available – it’s time to give the old guy another shout out. He’s playing almost 35 MPG over the past three and has scored at least 11 points in each of the past five games, including a season-best 20 on Thursday. Hell, Hill has even racked up four blocks over the past three. And how about the former Duke star’s shooting touch in the past two – 14-for-22? It’ll do.

C.J. Miles, SG/SF, Utah Jazz: After scoring 14 points (with five boards and a trey) Friday, Miles has now put up at least 13 in four of his past five games.

Francisco Garcia, SG/SF, Sacramento Kings: Garcia had a big game Friday in garbage time, but as long as he’s coming off the bench, his PT will be inconsistent, leaving him as an asset only in very deep formats. In smaller leagues, see if his 18-point explosion earns him more PT next week.

Tyler Hansbrough, PF/C, Indiana Pacers: Hansbrough is another player we drafted and quickly tired of early in the season. We thought he’d be a top 30 PF, but he hasn’t even performed at a top 60 level. However, the former Tar Heel is starting to make some noise off the Pacer bench recently, going for 22 and nine (with a rare block and a steal) last Wednesday and then following that up with 15 and nine (and another steal) on Tuesday (for some weird reason, Indy only had two games in the past 10 days). It’s worth noting that Hansbrough did his damage Tuesday in just 16 minutes, a total that won’t often allow a player to yield much Fantasy value. He’ll need to regularly be playing 20 to 25 minutes to be worth a longer look, but you’ve to figure Psycho-T has earned that with double digit points in back-to-back games for the first time since a run of seven straight early in the season when it looked like he’d be a useful Fantasy asset.

Al Horford, PF/C, Atlanta Hawks: This is a long shot, but with news that Horford has begun his rehabilitation from a torn pectoral muscle, it makes sense to stash him if you’ve got the room. Note that he may not be available until the final week of the season – if then – but he might return for the playoffs, so if you’re in a format that includes postseason performance, Horford is an option. In other formats, it’s time to track him and see how his recovery goes.

Chuck Hayes, PF/C, Sacramento Kings: The spike in PT Friday was mostly because the Kings went to their bench in a blowout, but Hayes played 25 minutes despite four trouble. Keep an eye on his PT going forward, for if he can start regularly getting 20-to-25 minutes, he’ll be worth an add in deeper formats.

Joel Anthony, PF/C, Miami Heat: This Canadian is a deep league special only, but the minutes are up lately (33.5 in the past two) and he pitched in with four points, four boards and three steals Friday after getting six points, seven boards and two blocks on Thursday. At a position where there are very few intriguing options, Anthony may be able to give deep league owners low-end value.

By RotoRob
Tags: Kyrie Irving
This entry was posted on Saturday, March 3rd, 2012 at 2:14 pm and is filed under BASKETBALL, RotoRob, The Wire Troll. You can follow any responses to this entry through the RSS 2.0 feed. Both comments and pings are currently closed.