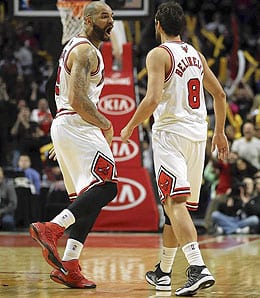 Marco Belinelli is exciting his teammates with his recent play.

We’re down the final six weeks of the season, so it’s put up or shut up time. There is no more important a time to troll the wire and you can really do it to your advantage this time of year because tons of owners have either thrown in the towel or started to focus on baseball.

Dwight Howard’s great rebounding has helped overcome whatever chemistry issues he brought to LA and the Lakers are rolling now; LA’s “other team” keeps putting on a show and is now breathing down the Thunder’s back for the No. 2 seed in the West; and in the East, the Knicks are dealing with knee injuries to stars Carmelo Anthony and Amare Stoudemire.

Marco Belinelli, SG, Chicago Bulls: Back in December, we gave Belinelli a nod, and he’s back for another look given his recent play — which has earned him Coach Tom Thibodeau’s confidence. He’s playing 40 minutes per game so far in March and has really responded (with three straight 20-point games) as he’s really taken a leadership role offensively on the short-handed Bulls. Hell, Belinelli even canned the game-winner Friday against the Jazz. The dude is in the zone, so grab him now.

Jason Kidd, PG/SG, New York Knicks: Back in late-November, we recommended Kidd and he sure shone in December, although his PT had been falling since then. However, the old guy’s been getting more minutes lately with Anthony hurting and he’s really chipping in with steals (11 in the last four games). Kidd’s shot has gone cold again now, but he gets tons of boards for a guard (including 10 on Thursday) and doesn’t need to be scoring to be useful. The fact of the matter is that the pairing of Kidd and starter Raymond Felton is providing the Knicks with superb PG play (our apologies to Jeremy Lin fans that thought this team would tank without him).

Devin Harris: PG/SG, Atlanta Hawks: Harris has reached double digit points in eight of the past nine, making him worth considering in larger formats.

Markieff Morris, PF, Phoenix Suns: We recommended Morris in late-November when he was pulling down more boards and getting a chance to start. However, his PT diminished over the next couple of months until recently. And now that Marcin Gortat is out (possibly for the rest of the season), Markieff — and his twin bro Marcus — started seeing more action. The twins helped Phoenix heat up a bit a couple of weeks ago, and they will be leaned on again now. Markieff has averaged over 26 MPG over the past five games and as the starting PF on Friday he shot well en route to nine points, three assists and a block. If the youngster can stay out of foul trouble, he has a chance to be a nice pickup in more than just deep leagues.

Matt Barnes, SF, Los Angeles Clippers: With Jamal Crawford (ankle) out Thursday, Barnes saw extra PT and responded with 19 points, three assists, a block and a steal. Coming off the heels of his first 20-point game since December the previous game, Barnes is officially hot. It’s the dude’s 33rd b-day Saturday, so who knows when we’ll get another chance to give him some Fantasy love? Hey, that’s the way we roll here on the Wire Troll.

Martell Webster, SF, Washington Wizards: Has anyone noticed that Webster is having a career year? He’s getting extra PT with Beal out, so give him a once over.

Tiago Splitter, San Antonio Spurs: In early-January, we gave Splitter some waiver wire love and the return has been pretty good, yet he remains available in over three quarters of ESPN leagues despite centre being a veritable wasteland if you need help. Sure, his main role is to set picks, but he’s managed two double-double in the past four games. Splitter didn’t do much Friday with just nine points, but he did sink 4-of-5 shots and pitched in with three assists and a block, so it wasn’t a complete flop.

Kendrick Perkins, Oklahoma City Thunder: In late-January, we recommended Perkins, and it paid off as he shot really well in February. Okay, so he’s not seeing as much action right now, but like we said, this position is a black hole and despite his horrid FT shooting, Perkins supplies some low-end value in very deep formats. The dude brings fire to the Thunder and his impact is tough to quantify on the stat sheet. Of course, that doesn’t exactly make him an attractive Fantasy option, but if you’re desperate, Perkins could help in a pinch.

Brandon Bass, Boston Celtics: Celtics’ fans would like nothing more than if Bass went away, but he’ll keep get chances to score while Boston tries to rest Kevin Garnett down the stretch.

By RotoRob
This entry was posted on Saturday, March 9th, 2013 at 1:32 pm and is filed under BASKETBALL, RotoRob, The Wire Troll. You can follow any responses to this entry through the RSS 2.0 feed. You can leave a response, or trackback from your own site.