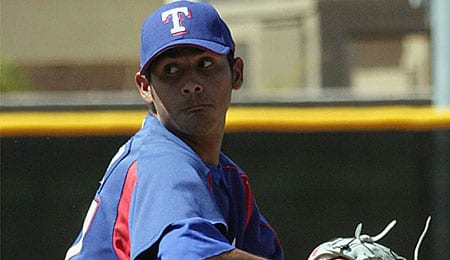 Martin Perez has an excellent chance to be the Rangers’ fifth starter.

The 2013 RotoRob MLB Draft Kit continues today with a look at the farm system of the Texas Rangers.

The Texas Rangers have had one of the best farm systems in the majors for the past couple of seasons, but the pitching could use a bit of an upgrade. Today, we examine the top 23 prospects in the system.

1. Jurickson Profar, SS: After Texas toyed with the idea of moving Ian Kinsler to the outfielder or first base to open second base for Profar, the plan was nixed, meaning the game’s top prospect will likely begin the season at Triple-A. However, the mere fact that such a proposition was floated tells you how high the Rangers are on this kid. New Texas hitting coach Dave Magadan says the hype is justified: “He’s as advertised.” Profar took himself off the Netherlands roster for the WBC – a move that could actually improve his chances of making the Rangers out of Spring Training. He’s clearly ready to make his mark on the majors, even if he struggled in limited action in the Dominican Winter League. Still Profar got plenty of seasoning at Double-A last year and even if his results weren’t as dominant as they were at High-A, they were still pretty damn impressive. Keep an eye on the Nelson Cruz PED situation. If he’s somehow suspended, it could set off a chain reaction that would give Profar an everyday job in Texas. Yes, this kid can hit – hell, some think he’s the next Barry Larkin. It’s just a matter of time before he’s doing it in the bigs.

2. Mike Olt, 1B/3B: A Wire Troll recommendation in early August, Olt didn’t wind up seeing enough action to be useful last year, but his time is coming. Surprisingly, the Rangers are considering letting Olt stay with the big club even if an everyday job is unavailable when camp breaks. Cruz’s situation will prompt Texas to give Olt some outfield reps this spring, and that will improve his ability to make the team. Another highly hyped Ranger prospect, Olt has some experience in the outfield, so the move wouldn’t be a tough transition. He didn’t hit well in the Dominican Winter League, but he excelled for a long enough stretch at Double-A to make us believe he’s ready for the bigs. Olt has stupendous power potential, but he’s definitely going to struggle to make contact. He’s going to spend most of 2013 at the age of 23, meaning that he still has several years of power growth ahead of him.

3. Martin Perez, LHP: Perez is another Ranger prospect that earned a Wire Troll pick from us (in early July), and while his command was sharper in the bigs, the bottom line results weren’t as good. As Texas builds a nice little collection of prospects, Perez could find himself as a trade chip as plenty of teams would be interested in a 21-year-old southpaw that has always seemed to be too young for his leagues. He’ll be given every opportunity to win a rotation spot this spring, and at this stage looks like the favourite to be the fifth starter. After the improvements he showed at Triple-A last year, we believe Perez is ready to stick, but we expect him to take his lumps early on. He really does a solid job of limiting long balls, but the walk rates will have to improve or he’s going to get hammered. Slowly, but surely, this Venezuelan has been inching towards the bigs. Now is his time.

4. Leonys Martin, OF: As we discussed in a Podcast last month, Martin has long been a Tim McLeod fave. A Top 10 prospect overall in some experts’ books, Martin will battle Craig Gentry for the centrefield job on the Rangers this spring. The Cuban-born Martin seems like the favourite to win the job, but Gentry could really surprise a lot of people here – he deserves a real shot. Martin’s extra-base pop at the Dominican Winter League left something to be desired, and really, he’d be best served seeing a bit more action at Triple-A. He has great speed, but we’d like to see him draw more walks if he’s ultimately going to settle in as a top of the order man. There’s no doubt Martin has the offensive and defensive tools to be a fine starting centerfielder, but we can’t shake the feeling that he’s going to struggle for a while before he begins to settle in. “Obviously, he is talented and the ceiling is limitless on him,” says Magadan.

5. Cody Buckel, RHP: Another top 100 prospect, Buckel popped up on the prospect radar after his big 2012 in which he dominated High-A, forcing a quick promotion to Double-A, where his record wasn’t quite as good, but his bottom line results were still impressive. This dude has major strikeout potential, racking up 279 Ks in in 241 1/3 IP over the past two seasons combined. His sweet showing earned him an invite to Spring Training, and the 20-year-old has risen quickly after Texas took him in the second round in 2010. Not all Rangers’ observers consider Buckel a top 10 prospect within the organization, but we are very high on him because his ratios have been off the charts throughout his career. If Buckel sharpens his control just a touch, look out. He’s small and won’t ever overpower hitters, but his ability to mix his pitches is going to move him up the ladder. Some think Buckel could wind up as a closer down the road.

6. Luke Jackson, RHP: A first round supplemental pick in 2010, Jackson was unimpressive in his pro debut at Class-A in 2011, but looked much better last year. He enjoyed a better record in the Sally, forcing his way up to High-A, where he continued to rack up wins. It’s Jackson’s strikeout rates that have him this high on the list, but if his control doesn’t improve, he’s going to struggle in the higher levels. Did the Rangers reach for him at pick No. 45 in the 2010 draft? We shall see, but Jackson is athletic enough to advance and one day become a big league starter, perhaps a No. 2 man in time. However, he’s raw and will need major refinements along the way.

7. Justin Grimm, RHP: Yet another Wire Troll recommendation from last season, Grimm actually looked very sharp in his first start before getting shellacked in his second outing and then moved to the pen for the remainder of his outings in the bigs. He’ll compete with Perez and Robbie Ross for the fifth starter job this spring, so the 24-year-old has sleeper potential if he lands the gig. The Red Sox failed to sign Grimm after taking him in the 13th round out of high school, and that may come back to haunt them as he’s really grown into a nice looking prospect since his University of Georgia days. Grimm’s looked durable and his improved control last season was really remarkable. He’s proved tough to go yard against and has Nolan Ryan in his corner, so you know he’s going to get plenty of rope.

8. Luis Sardinas, SS: Sardinas is another off the radar dude who finally took a step forward last year and started giving us an indication of just how good he can be. Signed by the Rangers on the same day as Profar, Sardinas is part of what’s become an organizational strength at shortstop. And if Profar is ultimately moved to second as many expect, it will be Sardinas that will ultimately be Elvis Andrus’ heir apparent. Sardinas enjoyed a very impressive showing at the AFL after scoring a boatload of runs in the Sally League. He’s a superb contact hitter, but completely lacks power. Sardinas has not been hyped, but he has some mad skills, so don’t sleep on him in keeper leagues.

12. Lewis Brinson, OF: Some consider him a top five prospect in the organization.

13. Wilmer Font, RHP: Font was signed out of Venezuela when he was just 16 and converted into a reliever last year.

15. Nomar Mazara, OF: It’s all about power with this kid.

16. Nick Williams, OF: Williams flashed nice across-the-board skills in his pro debut, but will need to make better contact as he heads toward full-season ball.

17. Neil Ramirez, RHP: A 2007 supplemental first rounder, Ramirez was too hittable last year, but is young enough to bounce back.

19. Will Lamb, LHP: Lamb wasn’t as effective at Class-A as we would have liked, so he is beginning to look like a future reliever.

20. Hanser Alberto, SS: Alberto tore it up in the AFL, but struggled in the Dominican Winter League.

21. Jairo Beras, OF: Beras has major power potential, but is suspended until July because of a controversy with his age.

22. Leury Garcia, SS: Garcia is in the running to be the Rangers’ UT man this year.

By RotoRob
Tags: Texas Rangers
This entry was posted on Wednesday, February 6th, 2013 at 4:59 pm and is filed under 2013 RotoRob MLB Draft Kit, BASEBALL, Prospects, RotoRob. You can follow any responses to this entry through the RSS 2.0 feed. Both comments and pings are currently closed.