The Wire Troll: The Reemergence of Brandon Belt 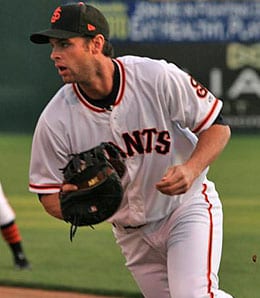 Brandon Belt is flashing his power.

As we head into the dog days of summer, your needs and wants should be clear and trading to address those needs becomes a frequent part of our great game. It’s important when looking at trading to remember there are always two parties involved. A successful trade not only addresses your needs but the needs of your trading partner. Do your homework, trade from strength, and find a trading partner that’s weak where your strong and (vice versa) and you have a guaranteed recipe for success.

While you’re pondering how to trade yourself to a spot at the top of the leaderboard there are some interesting waiver wire options to review so let’s give them the once over.

Brandon Belt, OF, San Francisco Giants (CBS: 38 per cent owned, ESPN: 15 per cent): We finally have a Brandon Belt sighting with the young slugger mashing homers on three consecutive days last week. In a bizarre episode, Aubrey Huff landed on the DL with a right knee sprain sustained while trying to climb over the dugout railing to join the Matt Cain perfect game festivities. The injury to Huff provides the perfect opportunity for Belt to see regular at-bats and build on his recent resurgence.

Brian Roberts, 2B, Baltimore Orioles (CBS: 43 percent owned, ESPN: 20 per cent): Last week, Roberts finally returned to the game after an absence of over a year with concussion issues. He’s gone 7-for-22 with four RBI in five games since returning to his customary leadoff slot in Baltimore and, more importantly, has not suffered any concussion related symptoms. Roberts will be an asset to both the Orioles and your Fantasy squad but it is best to temper your expectations in the one area that has always been his strength — stolen bases. Including his minor league rehab, in 64 at-bats since his return, he’s yet to attempt a steal which considering all he’s been through in the past year should not be a shock.

Gaby Sanchez, 1B, Florida Marlins (CBS: 32 per cent owned, ESPN: 21 per cent): Sanchez, recalled last week, hit for both power and average in his recent stay at Triple-A New Orleans, However, he’s continued to struggle with the Fish, going 3-for-21 with two RBI. After back-to-back 19-homer seasons, a return to form from Sanchez would be huge for the Marlins as they attempt to stay in the very tight NL East race.

Ike Davis, 1B, New York Mets (CBS: 47 per cent owned, ESPN: 24 per cent): Davis is in the midst of a seven-game hit streak in which he’s gone 10-for-20 with one homer and seven RBI, helping turn the corner in what has been a horrible start to his season. Another week of quality at-bats and the only opportunity you’ll have to acquire him will be through a trade.

Leonys Martin, OF, Texas Rangers (CBS: 10 per cent owned, ESPN: unowned): Since coming off the minor league DL a week and a half ago, Martin has turned up the power numbers, smacking two homers, driving in 11 runs, and spanking the ball to the tune of a .333 BA. Josh Hamilton is currently day-to-day after spending Friday hospitalized with an intestinal virus and the Rangers called up Martin to provide outfield depth. He’s likely returning to the minors once Hamilton is healthy, but his rare power/speed combo and great strike zone judgment should have the attention of all keeper league owners. Martin is the future in centrefield for the Rangers and that future is just around the corner.

Brad Boxberger, RP, San Diego Padres (CBS: 1 per cent owned, ESPN: unowned): In 23 IP at Triple-A Tucson, Boxberger struck out 35 batters while allowing 15 free passes. Isn’t this the stuff closers-in-waiting are made of?

Franklin Gutierrez, OF, Seattle Mariners (CBS: 3 per cent owned, ESPN: unowned): The Mariners plan on easing Gutierrez (just activated off the DL) back into the full-time gig in centrefield. Michael Saunders owners take note as it could get a bit crowded in the Seattle outfield.

Justin Grimm, SP, Texas Rangers (CBS: 5 per cent owned, ESPN: 2 per cent): Injuries to Derek Holland, Neftali Feliz and Alexi Ogando forced the Rangers to go to Double-A Frisco in search of a starting pitcher. In his MLB debut Saturday, Grimm tossed six solid innings of six-hit ball with seven punchouts in earning his first big league victory. He should be in line for several more starts until Holland returns or Roy Oswalt is ready to roll.

Steven Pearce, 1B, Baltimore Orioles (CBS: 1 per cent owned, ESPN: unowned): The former Pirate prospect is providing much needed relief in the injury-depleted O’s outfield. It will be at least a couple weeks before some of the walking wounded return, making Pearce worth a look in deeper formats.

Brett Cecil, SP, Toronto Blue Jays (CBS: 5 per cent owned, ESPN: unowned): The Jays lost Brandon Morrow, Kyle Drabek, and Drew Hutchison to injury in the span of five days last week. What a horrible turn of events for Toronto, which will now hand the ball to Cecil in the hopes he can return to the form that saw him win 15 games in 2010.

Martin Maldonado, C, Milwaukee Brewers (CBS: 4 per cent owned, ESPN: 1 per cent): Jonathan Lucroy will miss 4-to-6 weeks with a broken hand and Maldonado is proving that’s he more than just an interim backup to George Kottaras. Since his recall at the end of May, Maldonado has hit four homers, driven in 12 runs and moved into the principle catcher role for the Brew Crew. NL-only owners should take note.

Grant Green, 3B, Oakland Athletics (CBS: 3 per cent owned, ESPN: unowned): Green was shifted from shortstop to the outfield last year and has now been moved to third base. He’s enjoying a solid campaign at Triple-A Sacramento and with the hot corner being such a sore spot in Oakland, he could be on the fast track to a job with the big league club.

Cliff Pennington, SS, Oakland Athletics (CBS: 13 per cent owned, ESPN: 1 per cent owned): After a dreadful start to the season, Pennington is starting to deliver on the potential he demonstrated in 2010 and 2011. In his past seven games, he has one homer with four RBI, six runs scored, and two thefts. That’s solid value for your middle-infield slot.

Kris Medlen, RP/SP, Atlanta Braves (CBS: 7 per cent owned, ESPN: unowned): Medlen was recalled Friday to provide depth in the bullpen. Brandon Beachy is dealing with a sore elbow and didn’t survive the fourth inning Saturday. Medlen’s stay in the Braves pen could be a very short one, especially since he was sent down to the minors to get stretched out as a starter.

By Tim McLeod
This entry was posted on Sunday, June 17th, 2012 at 1:37 pm and is filed under BASEBALL, The Wire Troll, Tim McLeod. You can follow any responses to this entry through the RSS 2.0 feed. Both comments and pings are currently closed.