Can Dave Magadan Wake up the Texas Attack? 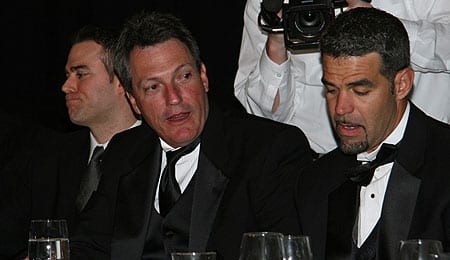 Dave Magadan, the new hitting coach charged with waking up a Texas Ranger offense that inexplicably faded down the stretch and didn’t show up for the Wild Card game, was the last batter ever faced by Ranger president Nolan Ryan during his 27-year Hall of Fame career. It’s true… look it up.

Now the question is whether Texas can bounce back and restore its AL supremacy. Reigning AL champion Detroit has already improved itself with the addition of Torii Hunter and Toronto has to move up a few rungs with the infusion of talent it landed in Miami’s most recent fire sale.

With Texas trying to figure out how to get both Elvis Andrus and Jurickson Profar into the lineup, the idea of shifting Ian Kinsler to the outfield has been raised. That would really limit his Fantasy value, so keeper league owners better monitor this situation very closely.

Of course, soon Texas will not only have the Angels and suddenly powerful A’s to deal with, but it will have to look over its shoulder at Seattle, too. Let’s face it, the Mariners have the makings of an incredibly rotation in about a year or two – especially if they opt to hang on to their 26-year-old Cy Young winner Felix Hernandez. Now, if Seattle can only find a middling offense.

Crave more in-depth Fantasy analysis? Then join us every Thursday at 9 p.m. EST for RotoRob’s Fantasy Baseball Weekly Podcast on Blogtalkradio. Tim McLeod and I will entertain and edify you for an hour each week. Tune in here.

By RotoRob
This entry was posted on Monday, November 19th, 2012 at 11:04 am and is filed under BASEBALL, Fantasy Notes, RotoRob. You can follow any responses to this entry through the RSS 2.0 feed. Both comments and pings are currently closed.