The 2011 RotoRob Awards continue today as we turn our attention to the diamond and pick the best — and most dubious — performances from the 2011 baseball season. 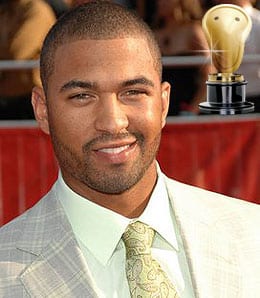 Matt Kemp sure looked sharp in Fantasy lineups this year.

Matt Kemp, OF, Los Angeles Dodgers: In 2009, Kemp showed incredible promise that translated into a high draft slot in 2010. He then found love with Rhianna, but apparently forgot that his principle function in life was as an outfielder for the Dodgers and not as a boy toy. In 2011, Kemp, to put it mildy, rebounded, got his priorities in order and posted a season for the ages. Was there any offensive category that Kemp wasn’t either at or near the top of in 2011? He clearly demonstrated why he had Fantasy owners drooling about that untapped potential. Thirty-nine homers, 126 RBI, 115 runs scored, 40 thefts and a .324 BA. Kemp rewarded those that gambled late in the first round with a spot at or near the top of their league standings.

Ryan Braun, OF, Milwaukee Brewers: Let’s ignore the obvious and give credit where credit is due. No point in needling the guy when he’s down. Braun had an amazing season capped by being named the NL MVP. The BBWAA got it wrong but nonetheless, Braun’s 33 homers, 111 RBI, 33 stolen bases and .332 BA were amazing numbers and worthy of a solid second place showing in this year’s chase for the golden jock. (Not to worry, Braun’s 2011 exploits did earn him an award, to be revealed below.)

Jacoby Ellsbury, OF, Boston Red Sox: After a totally lost 2010 season, this season saw the emergence of a new star in Beantown and he wasn’t named Carl Crawford. The speed was expected but did anyone believe Ellsbury would hit for the power he demonstrated in 2011? The 32 homers and 105 RBI combined with great stolen base numbers will vault Ellsbury back into the first round for 2012.

I’d mention Justin Verlander, but pitchers have their own award. It’s called the Cy Young — despite the assertions of the BBWAA. Still, obviously Verlander qualified as a Fantasy stud this year, and he likely helped usher in many a Fantasy championship. 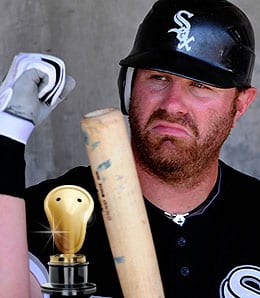 The Adam Dunn scowl was a common sight in 2011.

Adam Dunn, 1B/DH/Overpaid Lump on Bench, Chicago White Sox: I can still remember the talk last offseason when the news first broke about the Sox signing Dunn. In that bandbox, he’d be a lock for 40 dingers, possibly more, most experts surmised. Hell, Dunn didn’t even manage to finish 40 points light of the Mendoza line. After Dunn’s seven consecutive seasons of consistent home run production, have we ever seen a fall from grace as sudden and complete as his this year? Dunn did manage one great feat in 2011: he made Alex Rios look like Matt Kemp.

Alex Rios, OF, Chicago White Sox: Rios took the time in 2011 to remind us why the Toronto Blue Jays were still smiling each and every day after the Sox took them off the hook for his bloated contract.

Carl Crawford, OF, Boston Red Sox: When you commit $142 million over seven years, like the Red Sox did on Crawford, you expect a bit more than 11 big flies, 56 RBI, and 18 stolen bases. 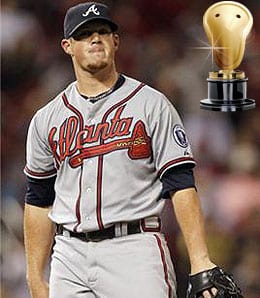 Craig Kimbrel, RP, Atlanta Braves: In what many thought was going to be a spirited competition between Kimbrel and Jonny Venters for the closing gig in Atlanta, Kimbrel took the bull by the horns and was simply dominant. His 46 saves and amazing 127 strikeouts in 77 IP makes for an easy decision as our choice for Fantasy Rookie of the Year. 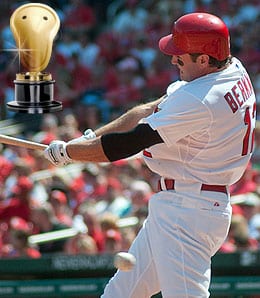 Lance Berkman, 1B/OF, St. Louis Cardinals: Coming off a dismal 14-homer campaign in 2010, Berkman was mainly an afterthought when looking at Fantasy drafts last March. Lo and behold, he not only stayed healthy (an amazing feat in and of itself), but rebounded to hit 31 -94-.301 BA. Those that stumbled onto Berkman at the back end of their 2011 drafts were rewarded in a huge way.

The Twit of the Year Award 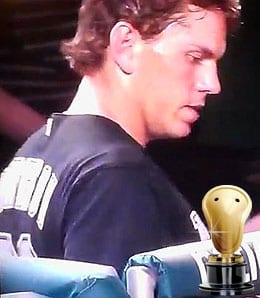 Logan Morrison’s tweeps were not impressed when he was demoted.

This one has to go to Marlin outfielder Logan Morrison, who was rumoured to have been demoted to Triple-A for his Tweeting (among other issues relating to his character). He was probably the No. 2 bat in the Marlins’ lineup at the time, which cements the speculation that he got sent down for his social media presence. Remember this, folks, when anointing Marlin owner Jeffrey Loria as a saviour for this offseason’s spending spree.

Con Artist of the Year (Decade) 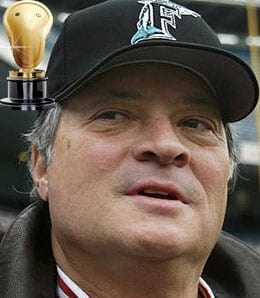 Speaking of Loria, he takes the cake here. After convincing the Miami faithful that his imminent survival depended on creating a welfare state for his team and conning the taxpayers out of millions, the Florida/Miami owner proceeded to go out this offseason and spend $27 million on Heath Bell, $106 million on Jose Reyes, and $58 million on Mark Buehrle. How do you like me now, Miami-Dade County commission? Marlins’ fans have ridden this rollercoaster several times, it seems. And you can bet, as The Who so eloquently put, they “Won’t Get Fooled Again.” 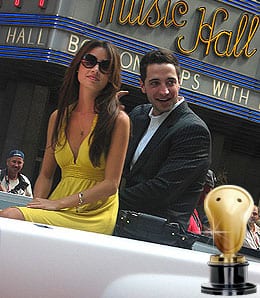 Ryan Braun was stylin’ with his ex-hottie, but didn’t look so sharp doing a faceplant.

In a game against the Cardinals at the end of August, Ryan Braun displayed his base running skills like we’ve never seen before and, for his sake, hopefully never again. He stumbled rounding third and the wheels came off as he did a serious face plant halfway down the third base line — turning a sure-fire inside-the-park homer into an easy out. His teammates, however, did take full advantage and had some fun with it the next day at practice, going all CSI on him.

Who Are You Award 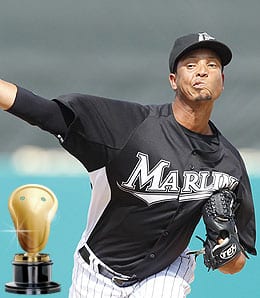 I signed the wrong name on my contract? Oops, my bad.

In one of the bizarre stories of the year, Leo Nunez somehow forgot to mention to U.S. Immigration or the Marlins that he was actually born a year later and that his real name was Juan Carlos Oviedo. The identity fraud also transcended to his closing abilities this year. Multiple personality disorder is a terrible illness and probably contributed to his masquerading as a closer in August when he blew three saves and posted an ERA of 11.42. Rumour has it Nunez/Oviedo was last seen roaming the jungles of the Dominican listening to this Who classic (yes, apparently we listen to a lot of Who tunes as well). 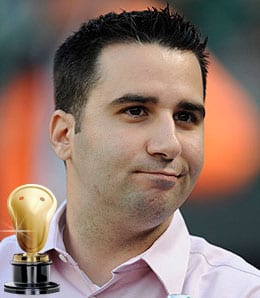 Toronto Blue Jays GM Alex Anthopoulos has to be a bit cranky these days. If the rumour mill is correct, he came up a day late and a dollar short in his chase for possibly the best starting pitcher currently not plying his trade in the bigs – Yu Darvish. The Toronto media was abuzz for weeks anticipating a Darvish acquisition, but unfortunately in the words of the immortal Maxwell Smart, “I missed it by that much.” 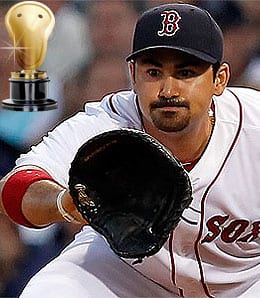 Adrian Gonzalez will never be confused with Speedy Gonzales.

Hell, former Red Sox manager Terry Francona even said so himself about his own player: “I’ve got to tell you, he’s the slowest player I’ve ever seen,” Tito said in reference to Adrian Gonzalez, who debuted with the Sox this year. To help Red Sox Nation understand the limitation of Gonzalez’s speed, Francona made a comparison that any Red Sox fans would understand and cringe at: “He’s Doug Mirabelli slow.” In other words, you’ll be using an hourglass to clock A-Gon down the line, folks. – RR 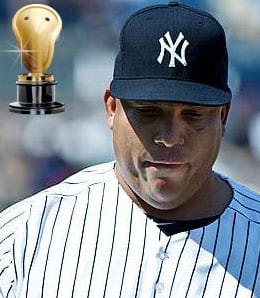 No stem cell — or cheeseburger — is safe from Bartolo Colon.

Normally we limit our awards to sports-related endeavours, but this year we’re going to break from precedent and recognize the efforts made by one player in the advancement of scientific research. Congratulations, Bartolo Colon, for your achievements in stem cell research. The Fat One, who sat out all of 2010, made a miraculous recovery this year, becoming a rather steady member of the Yankee rotation — which is a lot more than most of us thought he’d be when we teased the Yankees mercilessly for their reeking-of-desperation signings of both Colon and Freddy Garcia. Of course, we didn’t know at the time that Colon, whose career seemingly sputtered to an end because of shoulder and arm woes, had contracted a team of doctors to extract his fat and bone marrow stem cells and inject them into his shoulder and arm. While reportedly no HGH was used in this procedure, the fact remains that Colon is somewhat of a bionic man. Or perhaps an alien life form… Jabba the Hutt definitely bears a resemblance. — RR

By Tim McLeod
Tags: Baseball Awards
This entry was posted on Tuesday, December 27th, 2011 at 4:45 pm and is filed under BASEBALL, RotoRob, RotoRob Awards, Tim McLeod. You can follow any responses to this entry through the RSS 2.0 feed. Both comments and pings are currently closed.