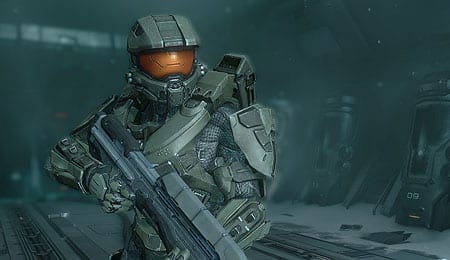 After five long years, the Chief is back.

I’ve told the story of my introduction to Halo before, so there’s no need to rehash it here. Suffice to say, Bungie’s inaugural effort ushered in a new era in my life as a gamer, and the series has long held a special place of reverence with me. Incredibly, more than five years have passed since the Master Chief landed a starring role, which when combined with the involvement of newcomer 343 Studios had raised expectations (and some reservations) to a fevered pitch. Could 343 measure up to Bungie’s lineage and give Microsoft a truly great Xbox 360 exclusive? Yes and yes.

There was no reason to mess with Halo’s controls, and the only notable difference between what you’ll find here versus Halo 3 is the addition of armour abilities (introduced in Halo: Reach). Gunplay is tight as a drum, allowing for precision aiming whether zoomed or firing from the hip. Vehicles handle exactly how you remember from the cumbersome Scorpion to the fishtailing Warthog — speaking of which, the game seems to assume you’ve played before as there were no instructions (at least on higher difficulty settings).

Put bluntly, Halo 4 is the best looking game on the Xbox 360. The cut scenes are beyond reproach with photo realistic quality, incredible lighting and a jaw dropping attention to detail. In action the game runs along smoothly no matter what combination of enemies, explosions and projectiles is appearing on the screen at that moment. The environments also look sharp, even though I would’ve preferred more natural settings and fewer of the forerunner structures that permeate the campaign.

Perhaps even more jarring than the graphical brilliance is the game’s revamped sound effects. Every weapon in the game packs a significant punch, rattling speakers and making the lengthy firefights an auditory treat. The voice acting of Steve Downes (Master Chief) and Mackenzie Mason (Cortana) is better than ever as each character is given meaningful dialogue, which serves to humanize both of them more in this campaign than in the original trilogy combined. A sweeping orchestral score is Halo goodness through and through as all the elements intermingle marvelously to establish a new high-water mark for the series.

Four years have passed since the Master Chief entered a state of cryostasis, left to drift aboard the wreckage of the Forward Unto Dawn until he’s needed again. That time has arrived. Awakened by Cortana as a rogue sect of the Covenant attempt to board the Dawn, the Master Chief finds that the ship’s remnants are heading toward a forerunner world known as Requiem. That’s just the beginning of the Chief’s problems, however, as his longtime A.I. colleague Cortana is on the fritz.

In service for eight years now — longer than an A.I. is supposed to remain active — Cortana has begun to experience rampancy. In her devolving state, she is prone to emotional outbursts and is literally thinking herself to death. This doesn’t sit well with the Chief, who promises to get her back to Earth in an effort to spare her this fate. That sets the stage for a surprisingly emotional story — the kind you can’t manufacture (see Medal of Honor Warfighter) and only get when you’ve got established characters that people have actually invested in.

There’s also a larger, less personal tale in Halo 4 that sees the Chief encounter an entirely new foe: the Prometheans, who have an army of artificial forces that supplant the Covenant as the primary enemies during the campaign. This new force is split into two main sects: knights and crawlers. The knights are tough and smart, able to teleport away from danger and capable of dealing one-hit kills both from range and up close. The dog-like crawlers lack the knights’ firepower, but they travel in packs, can crawl on practically any surface and must be shot in the head to put down.

With the Covenant falling in line behind the Prometheans you’ll be seeing plenty of familiar, albeit slightly altered enemies as well, with elites, grunts and jackals lining up to prevent you from reaching your objective. The game offers an intense challenge on Heroic and Legendary — so much so that it works to disrupt the campaign’s flow with some sections requiring multiple tries to pass. I’d still advise Halo veterans to jump right in on Heroic, though, as it feels more in tune with the series’ lineage.

Outside of those moments on higher difficulties when you get bogged down in moving from one switch to another, the pacing of Halo 4 is one of its strongest points. Seemingly each firefight is balanced out with a vehicular section or story element to keep the gameplay fresh and interesting. The excellent variety of guns also helps with this, and a general shortage of UNSC ammo forces you to embrace the many new weapons that have been added. Certain sections definitely push you toward specific weapon types, but I never felt pigeonholed to where I couldn’t advance without a precise loadout.

Piggybacking on the campaign’s strength is an updated competitive multiplayer, which retains the classic Halo feel while still implementing some new (to the series anyway) ideas. For starters, the entirety of these online battles is presented as Spartan training exercises aboard the UNSC frigate, Infinity. There isn’t a lot of expository depth there, but at least it serves as an excuse to watch more of the game’s beautifully rendered cut scenes.

Leveling takes its cue from Halo: Reach with additional pieces of armour and tech unlocking as you rack up experience points. Fully customizable loadouts, including various abilities, are also available this time around, meaning you’re no longer required to spawn with the assault rifle and magnum combo. Add that to a collection of 10 well-designed maps and all your favourite modes and you’ve got more proof of just how seamlessly 343 Studios has followed in Bungie’s footsteps — that includes an updated Forge and the always enjoyable Theater.

If there’s a weakness to be found with the multiplayer it’s in the decision to replace the co-operative score attack mode, Firefight, with the pseudo-storyline extension, Spartan Ops. The disc includes the first of 10 planned episodic installments with others appearing in the coming weeks for free to Xbox Live Gold members. The mode itself isn’t bad, and the high-quality CGI makes another appearance here, but it doesn’t have the legs of Firefight, which became one of my favourite time wasters on Reach. Spartan Ops can be played solo or with up to three other gamers, and as with most modes of that ilk you’ll find it’s more fun with additional people.

Any fears that Halo would falter without the stewardship of Bungie have been laid to rest, and Halo 4 starts the franchise’s second trilogy in impressive fashion. It looks amazing, plays wonderfully and feels like a big-budget title from start to finish. If you own an Xbox 360, you need to pick up Halo 4.

By Herija Green
This entry was posted on Tuesday, November 20th, 2012 at 10:56 am and is filed under Herija Green, Video Game Reviews. You can follow any responses to this entry through the RSS 2.0 feed. Responses are currently closed, but you can trackback from your own site.