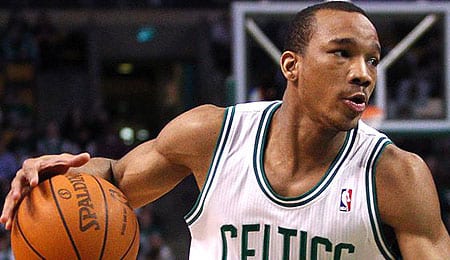 Avery Bradley showed us a little something-something on Friday.

We’re getting down to the nitty gritty of the NBA Fantasy season with playoffs in H2H leagues starting in just two weeks (including this one, which is nearly over).

It was another action-packed week in the NBA. Kyle Lowry – on the season’s most pleasant Fantasy surprises relative to his draft position – is dealing with an abdomen issue and sounds very iffy to play Saturday, so owners better have a contingency plan. Trevor Booker had a coming out party this week, and you’ve got to wonder if Andray Blatche has been Pipped. Tyson Chandler (hamstring) owners have been missed their big man this week, but he may return to action Sunday, so hopefully he can continue his fine campaign without further interruption.

Fantasy owners should also note that the trade deadline is Thursday, so bear in mind that you could be losing games from some of your players if they are moved. But it also means some players could be set free (Stephen Jackson and Blatche, for instance).

Avery Bradley, PG/SG, Boston Celtics: It’s time to put Bradley on your radar if you’re in a deep league. The minutes have been creeping up recently and on Friday, he shot extremely well (5-for-7) in 22 minutes, racking up a dozen points and dropping five dimes with a steal. Yes, the extra minutes came in a blowout win, but he could earn himself more rope going forward. This was a dude we thought might crack the rotation last season, but he barely made a dent as a rook, playing just over 5 MPG and only appearing in 31 games all season. This season, however, Bradley’s gotten tons more burn, even starting 10 games earlier this season when Rajon Rondo was injured. Boston is in a dog fight for playoff positioning so, if anything, there will be less PT for the reserves down the stretch, but if Bradley can regularly play like he did Friday, he’ll offer value. Keep your eyes on him next week.

Evan Turner, SG/SF, Philadelphia 76ers: As we discussed back at the beginning of the season, Turner has taken on a bigger role in Philly this season, but for the most part, he’s been fairly inconsistent. However, since moving into the starting two-guard role three games ago, the youngster has been taking his game to a new level. On Wednesday, Turner went off for a career-high 26 points while adding nine boards in 37 minutes and on Friday – in a whopping 43 minutes – he kept the good vibes going with 16 points, 12 boards, six assists, a steal and a block. The sophomore slump seems to be over, so grab Turner while you can in all formats, because he won’t be available for long at this rate.

Jordan Farmar, PG, New Jersey Nets: Farmar’s PT is on the rise now that he’s back from a groin injury and he’s averaged 13.5 points and 1.5 steals over the past two games.

Matt Bonner, PF/C, San Antonio Spurs: We gave Bonner a shout out a couple of months ago and he’s back for another appearance as a option for deep leaguers that are seeking help in treys. Okay, so he hasn’t exactly been showing a deft shooting touch lately, but Bonner has played between 20 and 26 minutes in four of the past five games and is averaging nearly two three-pointers per game over that stretch. He’s also pulled down at least six boards in two of the past three.

Ekpe Udoh, PF/C, Golden State Warriors: We ranked Udoh as a top 30 option at centre heading into the season, but he hasn’t quite lived up to that billing for most of the campaign, especially with the Warriors inexplicably continuing to start Andris Biedrins. Well, the team finally rectified that two games ago, and Udoh has been doing enough to offer low-level value. Over the past five games, he’s averaged 10.2 points, five boards, two blocks and a steal in 28.6 MPG. Udoh is inconsistent in most cats, but if you need blocks, he’s a dude to target – he’s had at least one in 14 straight games. He’s sort of playing out of position at centre – he’s really more of a four – but Golden State is going to give him a shot to stick, so grab him now in 14-team leagues and give him a long look in smaller formats.

Shelden Williams, PF/C, New Jersey Nets: Poor Brook Lopez just came back from his broken foot and now a sprained ankle will sideline him for another three weeks. Enter Williams, who hasn’t popped up on the Fantasy radar since the beginning of the 2009-10 season. He’s started the past three games, and while he did jack squat in his first start, Williams has been making tons of noise in the past two. On Wednesday – in a robust 41 minutes of action — he recorded his first double-double in almost a month and he followed that up Friday with six points, 13 boards (six on the offensive glass), two assists and a steal. Need boards? Give Williams a look in formats of 16 teams or larger, and put him on your radar in 14- or even 12-team leagues.

Ian Mahinmi, PF/C, Dallas Mavericks: Starter Brendan Haywood is out with a sprained ankle, leaving Mahinmi to man the middle in Big D. Staying out of foul trouble is an issue for the youngster, but he’s managed to play at least 23 minutes in four straight games and on Friday he sunk 5-of-8 for 12 points with seven boards and a block. This is another deep league special, but if Mahinmi can show enough, he’s got a shot to stick in the starting five, or at least earn himself enough rotation time to provide ongoing value.

Chris Andersen, PF/C, Denver Nuggets: The Birdman is finally getting a bit of run… well… enough to help you in blocks (he’s averaged 2.5 swats over the past four games).

Byron Mullens, Charlotte Bobcats: The PT hasn’t been there until recently, but Mullen has at least five boards in four straight and has blocked a combined eight shots in the past two games. If he gets 20-to-25 minutes per game, he can be useful in deeper formats.

By RotoRob
This entry was posted on Saturday, March 10th, 2012 at 1:53 pm and is filed under BASKETBALL, RotoRob, The Wire Troll. You can follow any responses to this entry through the RSS 2.0 feed. Both comments and pings are currently closed.