Podcast: Will Utley be Chased off Second? 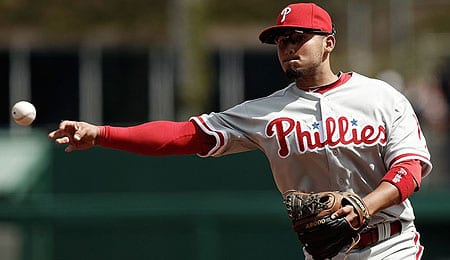 Could Freddy Galvis force Chase Utley to another position?

The boys and I were back for another week of Fantasy baseball chatter in RotoRob’s Fantasy Baseball Weekly Podcast, heard every Thursday at 9 p.m. EST on Blogtalkradio. In between Tim’s incessant disappearing act throughout the show, haggis, scrapple, and myriad other… err… culinary delights were on the table of discussion this week. Oh, and we also found time to tackle a crapload of Fantasy baseball related topics, including:

As always, to hear the show in full, simply click the play button below. Do it. Do it now.

By RotoRob
This entry was posted on Friday, August 31st, 2012 at 12:54 pm and is filed under BASEBALL, Buck Davidson, Podcast, RotoRob, RotoRob's Fantasy Baseball Weekly, Tim McLeod. You can follow any responses to this entry through the RSS 2.0 feed. Responses are currently closed, but you can trackback from your own site.