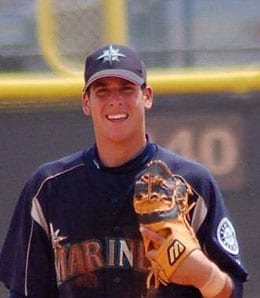 Alex Liddi is a candidate for a September promotion.

After his promising debut last year in which he hit three homers and three doubles in just 15 games, Alex Liddi was a major disappointment in Seattle this year. His lack of productivity and substandard power caused the Mariners to farm him out in early June.

So how has the recently turned 24-year-old Italian fared at Triple-A?

Thankfully, he’s bounced back in a big way in August – especially in the past week or so. After going 2-for-4 with an RBI double and a three-run homer Monday, Liddi has now hit safely in five straight games – the last four of which are all multi-hit efforts. He’s homered in back-to-back games.

His big August has helped salvage a Triple-A season that really isn’t that impressive. His .260 BA is respectable, but you’d expect more after he spent time in Seattle the past two years. The decrease in extra-base pop really stuck out, but Liddi seems to be whacking the ball with more authority lately.

Expect to see him return to Em City in September, but it’s unclear how much PT Liddi will get with Kyle Seager hitting well and the Mariners playing well enough lately to work their way into the fringe of the wild card discussion.

By RotoRob
This entry was posted on Tuesday, August 28th, 2012 at 1:25 pm and is filed under BASEBALL, Minor Matters, Prospects, RotoRob. You can follow any responses to this entry through the RSS 2.0 feed. Responses are currently closed, but you can trackback from your own site.