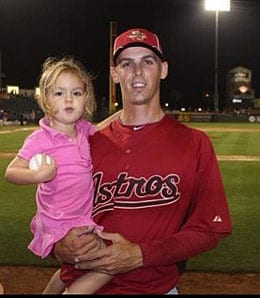 Mickey Storey is winning over fans in Houston.

A lot of things have to go wrong for a team to not only be dead last in the majors, but also as far away from anyone else as the Houston Astros currently are.

Trying to identify one aspect of what’s caused the Astros to unravel is like trying to pinpoint the donut that made Rosanne Barr fat. It’s an impossible and pointless exercise.

But for the sake of argument, let’s take a look at Houston’s bullpen, which is currently better than only the Mets’ relief corps in all of baseball.

Let’s start with the positive.

Wilton Lopez just keeps getting better and the Astros finally seem to have handed him the closer job, although – ironically – that’s when he started to struggle. In the past three weeks and change, he’s managed to record his first two saves of the season but has also suffered three losses, one resulting in a blown save. Lopez suffered another blown save in a game in which he managed to vulture a win.

An elbow injury that cost him nearly a month has kept Lopez’s workload below what he usually logs, but what’s really impressed us this year is the massively improved control. Toss in the fact that he’s already matched his career high in wins and is on pace for his third straight season with a better ERA, and perhaps we are finally looking at the emergence of Lopez as a closer – something Fantasy experts have long prognosticated.

Lopez has value in NL-only formats and is worth a look in mixed leagues, but when you consider how few save chances he’ll get with Houston, he can ill afford to be blowing them.

Rookie Mickey Storey has also looked sharp. The 26-year-old righty is striking out a batter per inning in a long relief role, although he did suffer a loss for his only decision to date. Using a four-pitch arsenal, he fanned 74 against just 14 walks in 65 IP at Triple-A, so was clearly ready for his first shot at the majors. So far, so good.

Brandon Lyon revitalized his career this year, but was peddled to the Jays in that massive deal last month.

LOOGY Wesley Wright has been effective in a set-up role, but not nearly as sharp as he was last year in limited opportunities. Shockingly, the 27-year-old – in his fifth season with the team – is the longest-serving Astro. House cleaning, baby.

Brett Myers did a fine job as closer before getting shipped off to the White Sox.

Lefty Fernando Abad was enjoying a fine comeback season, but he’s now been shifted into the rotation.

Xavier Cedeno has some issues with wildness, but he has shown improvement in a much longer look in Houston this year.

Here’s where things get real ugly.

Fernando Rodriguez has been tougher to hit this year, but his strikeout rate has slipped and his bottom line results have gotten ugly. Stranding runners hasn’t been an issue, but starting an inning clean has produced scary results. What up with that?

David Carpenter was taking a serious beatdown before getting shipped to the Jays.

Rookie Rhiner Cruz has been unable to come close to duplicating his minor league strikeout prowess, leading to some pathetic bottom line results. Somehow, this dude has been allowed to make 42 appearances totalling 44 1/3 IP despite an ERA that he just recently managed to get below 7.00.

Hector Ambriz had his contract purchased from Triple-A last week, returning to the majors for the first since 2011 Tommy John surgery. If he can keep the ball in the park, he could develop into a decent reliever.

After being a big part of the Houston bullpen last year, Enerio Del Rosario was freaking awful and had to be outrighted to Triple-A.

Finally, we’ve got Francisco Cordero, inexplicably acquired by the Astros in that 10-player deal with Toronto. As bad as he was with the Jays, Cordero was even more horrific in Houston (despite better K rates) before a toe injury landed him on the DL. That was four weeks ago, and he’s still out. Wow, we can’t understand why he’s not rushing back.

By RotoRob
This entry was posted on Wednesday, August 29th, 2012 at 1:23 pm and is filed under BASEBALL, RotoRob, Team report. You can follow any responses to this entry through the RSS 2.0 feed. Both comments and pings are currently closed.