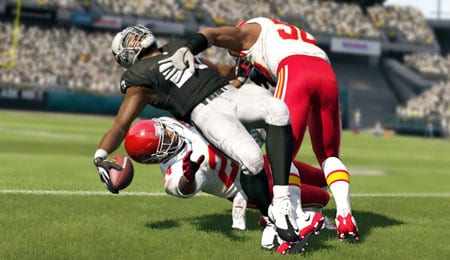 The Infinity Engine allows for some painful looking hits.

After spending the last two years largely treading water with modest tweaks and refinements, EA Sports is rolling out some significant new features for Madden NFL ’13. While these include a brand new mode (Connected Careers) and Kinect support on the Xbox 360, the signature addition is the Infinity Engine, which promises to push the series’ gameplay to new heights. While it may not be the awe-inspiring revolution it was touted as, there’s no question this is EA’s strongest effort in years.

As with its collegiate counterpart, Madden ’13 has amped up the aerial game with total control passing, receiver awareness and more realistic pass trajectories. Total control passing allows you to do things like lead your intended target into soft spots in the zone or throw to the back shoulder. It works well, though there are times when the quarterback won’t hit the zone you intended and would-be completions are knocked down. Receiver awareness simply means any target whose button is ghosted is not ready for a pass; once it turns solid you can throw them the ball.

Also new on the Xbox 360 is Kinect implementation as pre-snap adjustments can now be made via a series of spoken commands. It’s an interesting gimmick and is worth playing around with if you own the peripheral. That being said, using your voice to make changes is only really viable on offense, where you determine when the ball will be snapped. On defense you generally only have time to make one or two changes — there’s a delay while the Kinect figures out what you said — before the computer hikes the ball. One nice touch is that for online play, the game automatically mutes your microphone so your opponent can’t listen in on your calls.

Outside of those changes, and the long overdue ability to cancel a play-action fake when you’re about to get buried, it’s pretty much business as usual. One last item of note, however, is that controller-based adjustments are now built around the d-pad unless you enable “quick links,” which defaults the setup back to what series vets are used to.

At first blush you might not notice much difference visually from last season to this, but once you start playing you’ll be introduced to the Infinity Engine. Gone are the pre-canned tackling animations of years past, replaced by a physics-based collision system that weighs a number of factors (size, speed, impact, etc.) and creates tons of potential outcomes. Players will be flattened, knocked off balance and recover or simply brush off indirect contact. There are still some kinks to be ironed out, such as the number of players that go tumbling over one another after the whistle, but it’s definitely another step toward making the game more closely resemble what you see on television.

Speaking of which, Madden ’13 has also brushed up on its presentation with better looking intros and more dynamic replays throughout. Seeing the action slowed down will sometimes expose a wonky looking animation on something like a batted ball or fumble recovery, though given the number of angles they show it’s actually quite impressive how good it looks.

On commentary, Gus Johnson and Cris Collinsworth have been replaced by CBS’ top team of Phil Simms and Jim Nance. It’s a step in the right direction as Simms and Nance offer considerably more chemistry than their predecessors. There are still issues, though, as Simms will toss out random chastisements that hold little to no validity — for instance, he criticized me for throwing an eight-yard completion on third-and-six, saying that I only cared about stats and should’ve pushed the ball down the field. Simms also accused me of running up the score when I kicked a field goal as time expired… in the first half.

Anyone booting up Madden NFL ’13 and expecting to see the usual assortment of modes may be surprised to see that both Franchise and Superstar have disappeared. Don’t panic. They’re not really gone; instead, they’ve been repurposed and combined in the Connected Careers mode, which becomes the primary destination for gamers.

Connected Careers allows you to guide a player or coach with both created and existing players available for selection. If you go the player route expect a beefed up version of Superstar. Here you’ll choose your identity, and if you’re creating someone from scratch you’ll select from a list of pre-set talent profiles (for example, speed HB or pocket passer QB), pick your team and a basic back story that establishes what expectations surround you coming into the NFL.

Once there you’ll need to build up your player by completing a series of goals to earn experience points, which can then be used to purchase upgrades. Goals are divvied up into weekly, seasonal and career milestones with rewards based on the difficulty of reaching them. You can also snag more XP during weekly practices by choosing and successfully completing scenarios. It felt like a hard sell, though, as some of them task you with playing four quarters of practice.

Play well and meet your goals and you’ll continue to develop as a player. Fail and your skills will regress after the season. Everything you do contributes to your Legacy score, which is then used to measure you against all-times great at the position (Joe Montana, Reggie White, etc).

Flip over to the coaches in Connected Careers and you’ll find the evolution of Franchise mode with all the usual accoutrements such as scouting players, negotiating contracts and overseeing personnel decisions. On gameday you control the entire team on the field in traditional Madden style, so this is not to be confused as an extension of the “coach” mode we’ve seen in past versions where your influence ended once the play is called.

Here experience points are divided up among more administrative tasks such as convincing free agents to join your club or utilizing the new scouting system. Now an initial look will allow you to view letter grades for various attributes, whereas a second pass will show you the actual numeric rating.

What makes Connected Careers more unique is the online functionality. Here you can have up to 32 gamers participate in any combination you can think up. For instance, if one person wants to only control a defensive back, one wants to coach and one wants to be a tight end, they can all compete in the same league. Conversely, you can limit your leagues to only allow coaches or players so that everyone competes on level ground.

Connected Careers is good fun, the social media angle of the presentation is well executed and it gives players more variety in how they approach online leagues. However, it’s more of a reshuffling of the deck than true innovation. Plus, watching the computer A.I. blow plays and miss holes that a human player never would makes me wonder about the viability of having player vs. coach matches.

An online pass issue limited the amount of time I got to spend online, but once that was cleared up it was the usual mix of slick lobbies and smooth connection speeds. Madden Ultimate Team also returns with its card collecting meets Fantasy football approach. It’s a decent alternative and can be fun after you start actually getting players you’ve heard of on your team. Lastly, Madden Moments will be added throughout the year as EA challenges you to match (or stop) exceptional in-season performances.

For hardcore Madden fans, scooping up a copy of Madden NFL ’13 was already a no brainer. However, those that resisted the urge to dig into their wallets the past two years amid less sweeping changes should consider this a good year to once again take the plunge.

In addition to playing Madden NFL ’13 on the Xbox 360, I also spent a healthy amount of time checking out its handheld brethren. The game doesn’t do much with the Vita’s unique controls with tilting the unit to aim kicks, selecting players by touching them and executing jukes with the read touch pad rating as the most significant.

Visually, the game looks good and runs smooth during the actual gameplay. It stutters noticeably, however, when transitioning to replays and the presentation screens that are meant to fill the time in between plays. At times it’s significant enough to make selecting plays a nuisance because the game queues up your inputs. There are also some problems with the commentary not accurately reading when a game is taking place — for instance, during a pre-season game Simms and Nantz spent time talking about that contest’s playoff implications.

Unlike the console versions, Franchise and Superstar (which feels like it has new life on the Vita since it presents shorter games that seem ideal for the mobile platform) modes remain on the Vita with the new Connected Careers nowhere to be found.

It’s a solid package to be sure, but the divergent modes and lack of cross play for PlayStation 3 owners make it feel isolated.

By Herija Green
This entry was posted on Monday, August 27th, 2012 at 11:50 am and is filed under FOOTBALL, Herija Green, Video Game Reviews. You can follow any responses to this entry through the RSS 2.0 feed. Both comments and pings are currently closed.